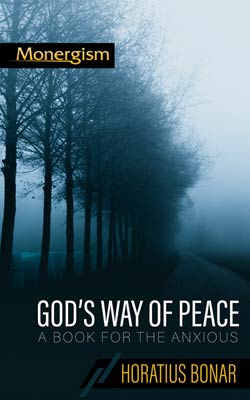 "God's way of peace", by the Rev. Horatius Bonar, of Scotland, has been adopted, and is now issued, by the Presbyterian Publication Committee with the belief that its wide circulation will be of the greatest service to the cause of Christ. To the troubled, anxious, and inquiring, it is a guide and helper. It leads them to Christ crucified, the present Saviour, the complete salvation - to Christ, not an assistant, but a Saviour. It incites him to labor for God's dear Son with the happy earnestness of those who are entirely, as well as freely, forgiven; whose reward is his approving smile. Its use is commended to pastors and laymen who would lead burdened souls to the enjoyment of Peace with God.

THERE seem to be many, in our day, who are seeking God. Yet they appear to be but “feeling after him in order to find him,” as if he were either a distant or “unknown God.” They forget that “he is NOT FAR from every one of us,” (Acts xvii.27); for “in him we live, and move, and have our being.”

To know that He is not far; that he has come down; that he has come nigh; this is the “beginning of the gospel.” It gives direct denial to the vain thoughts of those who think that they must bring Him nigh by their prayers and devout performances. He has shewn himself to us, that we may know him, and in knowing him find the life of our souls.

With some, who name the name of Christ, religion is a very unfinished thing. It is by no means satisfactory either to the man himself, or to the onlookers. There is much awanting. The man is anxious and earnest, but if he has not “peace with God,” he has not what God calls “religion.”

Acceptance with God lies at the foundation of all religion; for there must be an accepted worshipper, before there can be any acceptable worship. Religion is with many merely the means of averting God’s displeasure, and securing his favour. It is often irksome, but they do not feel easy in neglecting it; and they hope that by it they will obtain forgiveness before they die.

This, however, is the inversion of God’s order, and is in reality the worship of an unknown God. It terminates in forgiveness; whereas God’s religion begins with it. All false religions, though outwardly differing very widely, are made up of earnest efforts to secure for the religionist the divine favour now, and eternal life at last. The one true religion is seen in the holy life of those who, having found for themselves forgiveness and favour, in believing the record which God has given of his Son, are walking with him from day to day, in the calm but sure consciousness of being entirely accepted, and working for him with the happy earnestness of those whose reward is his constant smile of love; who having been much forgiven, love much, and shew forth, by daily sacrifice and service, how much they feel themselves debtors to a redeeming God, debtors to his Church, and debtors to the world in which they live (Rom. i. 14).

But if this be true religion, how much is there of the false?

It is not good that men should be all their life seeking God, and never finding him; that they should be ever learning, and never able to come to the knowledge of the truth. It is not good to be always doubting; and, when challenged, to make the untrue excuse that they are only doubting themselves, not God; that they are only dissatisfied with their own faith, but not with its glorious object. It is not good to believe in our own faith, still less in our own doubts, which some seem to do, making the best doubter to be the best believer; as if it were the gold of the cup, not the living water which it contains, that was to quench our thirst; and as if it were unlawful to take that precious water from a poor earthen vessel, such as our imperfect faith must ever be. Ah, in this momentous thing, surely it is with the water and not with the vessel that the thirsty soul has to do? What matters it though the vessel be one of skin, or earthenware, – nay, though it be but “a sherd to take up water from the pit,” (Isa. xxx. 14). It is not the quality of the vessel, but the quality of the water, that the thirsty soul thinks of; and he, whose pride will not allow him to drink out of a soiled and broken pitcher, must die of thirst. So he who puts away the sure reconciliation of the cross, because of an imperfect faith, must die the death. He who says, “I believe the right thing, but I don’t believe it in the right way, and therefore I can’t have peace;” is the man whose pride is such, that he is determined not to quench his thirst save out of a cup of gold.

Some have tried to give directions to sinners “how to get converted,” multiplying words without wisdom, leading the sinner away from the cross by setting him upon doing, not upon believing. Our business is not to give any such directions, but, as the apostles did, to preach Christ crucified, a present Saviour and a present salvation. Then it is that sinners are converted, as the Lord himself said, “I, if I be lifted up, will draw all men unto me,” (John xii. 32).

In the following chapters there are some things which may appear repetitions. But this could not easily be avoided, as there were certain truths as well as certain errors that necessarily came up at different points and under different aspects. I need not apologise for these, as they were, in a great measure, unavoidable. They take up very little space, and I do not think they will seem at all superfluous to any one who reads for profit and not for criticism. 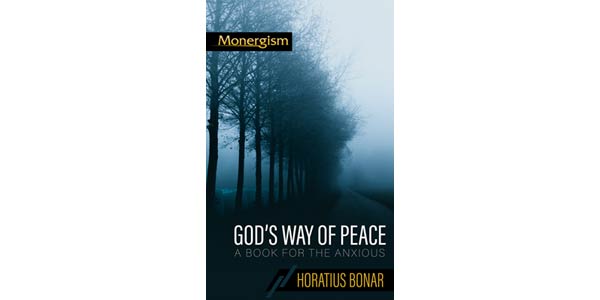