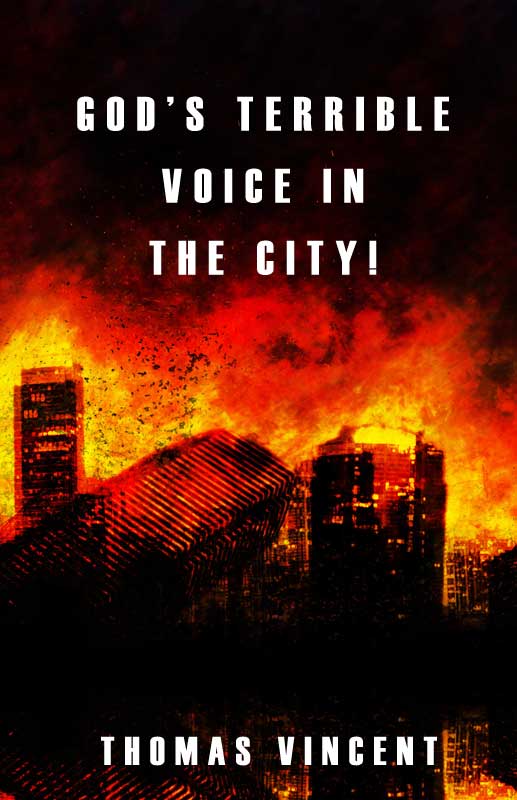 "When a trumpet sounds in a city — do not the people tremble? When disaster comes to a city — has not the Lord caused it? The lion has roared — who will not fear? The Sovereign Lord has spoken — who can but prophesy?" Amos 3:6, 8.

I. The Sound of the Voice, in the history of the two late dreadful judgments of PLAGUE and FIRE in London.

II. The Interpretation of the Voice, in a discovery of the cause and design of these judgments.

"Listen! The Lord's voice cries unto the city. The man of wisdom shall see Your name. Hear the rod, and the One who has appointed it!" Micah 6:9

To all such of the City, who have seen the desolations of London by the late judgments of Plague and Fire.

It might have seemed more seasonable unto some, if a work of this nature had come forth unto view more immediately after the sound of God's terrible voice of the last dreadful judgment of the fire; because if a man strikes while the iron is hot — it is likely to make the more deep impression; which, when it grows cool, grows hard and unmalleable. And if the hammer of the Word had been used, when London was newly come forth out of the fiery furnace — some might think they would have yielded the more easily unto its strokes, and the better have received the impression which this hammer would work them unto. And, since the fresh and lively remembrance of the judgment is more worn off; it is to be feared that they are more cooled and hardened, and therefore in likelihood it will be more difficult to effect a due impression of the judgments, by the Word, upon them.

Yet, besides that, it was not in my thoughts to attempt this work, until the greatest part of the winter was spent; I may further add, that though a discourse concerning the plague would have been most seasonable under the judgment itself, when people, who were generally taken off from their trading, had room and time for retirement and consideration, more than ever they had in their lives before; and therefore were more likely to lay to heart what might be spoken or written unto them on that subject; Yet the reason is not the same in the judgment of the fire, which (however startling and astonishing), was so far from giving them retiring time for consideration, as the former judgment of the plague had done; that it did engage them unto more laborious works than ever they had, not only while London was burning, in removing what they could save of their goods from the fire; but also since, in looking out for new habitations, and fitting their houses and shops for trades; which has given them occasion for so much distraction, that I fear they could hardly settle their minds to read and consider so seriously as they should, what the Lord has been doing with them, and speaking unto them by this Terrible Voice, which has sounded so loud in their ears.

But by this time I hope that the most have attained to some kind of settlement; at least, so much, as to give them time to sit down and ponder upon the meaning of God, in these strange and dreadful judgments of plague and fire in the city; and therefore this book may be more seasonable unto the most, than if it had been written and presented to them immediately after the fire had burnt them out of their habitations.

Friends, it is high time for all of you to retire yourselves, and bethink yourselves, and wisely to consider God's dealings with you; to open your ear, and labor to understand these speaking judgments, lest, if God be provoked by your deafness and incorrigibleness, to speak a third time — it be in your utter ruin and desolation! If these papers are any ways helpful to revive in your memories the judgments themselves, by the Historical Narration which here you have of them, to work your hearts to some sense of sin in discovery of the cause; and to persuade you to a ready compliance with God's design, in the declaring of what God now expects from you, after such dreadful executions; as yours will be the benefit — so I desire that God may have the whole glory; and that you would make this return for my help of you — to help me with your prayers, that I may be the more helpful to you in mine, who am,
Your dearly affectionate friend, and servant in the Lord,
Thomas Vincent

"By terrible things in righteousness, will you answer us!" Psalm 65:5

Section I. How God Speaks

Section II. What are those terrible things by which God sometimes speaks?

Section III. Why is it, that the Lord speaks unto a people by such terrible things?

Section 5. The Plague so great, so recent, should not be forgotten

Section 6. "At the time of your appearing you will make them like a fiery furnace."

Section 7. Concerning the cause of these judgments. why has the Lord spoken by such terrible things in the city of London?

Section 8. A catalogue of London's Sins, which have provoked the Lord to speak with so terrible a Voice in the City.

Section 10. Concerning the Design of these judgments.

Section 11. The Duties which God expects from London after such desolations by the Plague and Fire