Gleanings in Genesis by A. W. Pink 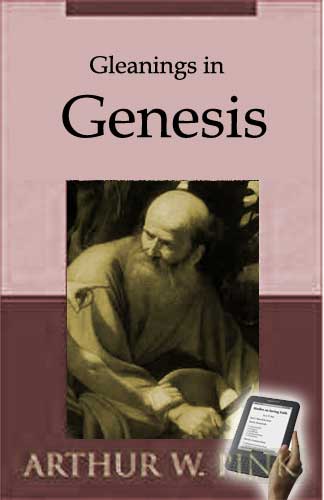 Appropriately has Genesis been termed "the seed plot of the Bible," for in it we have, in germ form, almost all of the great doctrines which are afterwards fully developed in the books of Scripture which follow.

In Genesis God is revealed as the Creator-God, as the Covenant-God, as the Almighty-God, as well as "the Most High, Possessor of heaven and earth."

In Genesis we have the first hint of the Blessed Trinity,of a plurality of Persons in the Godhead—"Let us make man in our image" (Gen. 1:26).

In Genesis the wiles of Satan are exposed. We "are not ignorant of his devices," for here the Holy Spirit has fully uncovered them. The realm in which the arch-enemy works is not the moral but the spiritual. He calls into question the Word of God, casts doubt on its integrity, denies its veracity.

In Genesis the truth of sovereign election is first exhibited. God singles out Abraham from an idolatrous people, and makes him the father of the chosen Nation. God passes by Ishmael and calls Isaac.

In Genesis the truth of salvation istypically displayed. Our fallen first parents are clothed by God Himself, clothed with skins: to procure those skins death had to come in, blood must be shed, the innocent was slain in the stead of the guilty. Only thus could man’s shame be covered, and only thus could the sinner be fitted to stand before the thrice holy God.

In Genesis the believer’s security isstrikingly illustrated. The flood of Divine judgment descends on the earth, and swallows up all its guilty inhabitants. But Noah, who had found grace in the eyes of the Lord, was safely preserved in the ark, into which God had shut him.

In Genesis the truth of separation isclearly inculcated. Enoch’s lot was cast in days wherein evil abounded, but he lived apart from the world, walking with God. Abraham was called upon to separate himself from idolatrous Chaldea, and to step out upon the promises of God. Lot is held up before us as a solemn example of the direful consequences of being unequally yoked with unbelievers, and of having fellowship with the unfruitful works of darkness.

In Genesis God’s disciplinary chastisements upon an erring believer are portrayed. Jacob is the standing example of what happens to a child of God who walks after the flesh, instead of after the spirit. But in the end we are shown how Divine grace triumphs over human frailty.

In Genesis we are shown the importance and value of prayer.Abraham prayed unto God and Abimelech’s life was spared (Gen. 20:17). Abraham’s servant cries to the Lord that God would prosper his efforts to secure a wife for Isaac, and God answered his petition (chap. 24). Jacob, too, prays, and God hearkened.

In Genesis the saint’s rapture to heaven is vividly portrayed. Enoch, the man who walked with God, "wasnot," for God had translated him. He did not pass through the portals of death. He was suddenly removed from these scenes of sin and suffering and transported into the realm of glory without seeing death.

In Genesis the divine incarnation is first declared. The Coming One was to be supernaturally begotten. He was to enter this world as none other ever did. He was to be the Son of Man, and yet have no human father. The One who should bruise the serpent’s head was to be the woman’s "Seed."

In Genesis the death and resurrection of the Savior are strikingly foreshadowed. The ark, in which were preserved Noah and his family, were brought safely through the deluge of death on to the new earth. Isaac, the beloved son of Abraham, at the bidding of his father, is laid,

unresistingly, on the altar, and from it Abraham "received him back as in a figure from the dead."

In Genesis we also learn of the Savior’s coming exaltation.This is strikingly typified in the history of Joseph—the most complete of all the personal types of Christ—who, after a period of humiliation and suffering was exalted to be the governor over all Egypt. Jacob, too, on his deathbed, also declares of Shiloh that "untohim shall the gathering of the peoples be" (Gen. 49:10).

In Genesis the priesthood of Christ is anticipated. The Lord Jesus is a Priest not of the Aaronic system, but "after the order of Melchzedek." And it is in Genesis that this mysterious character, who received tithes from and blessed Abraham, is brought before our view.

In Genesis the coming Antichrist is announced, announced as "the seed of the serpent" (Gen. 3:15). He is seen, too, foreshadowed in the person and history of Nimrod, the rebel against the Lord, the man who headed the first great federation in open opposition to the Most High.

In Genesis we first read of God giving Palestine to Abraham and to his seed: "And the Lord appeared unto Abraham, and said, Unto thy seed will I give this land" (Gen. 12:7). And again, "For all the land which thou seest, to thee will I give it, and to thy seed forever" (Gen. 13:15).

In Genesis the judgment of God on the wicked is solemnly exhibited. Cain confesses his punishment is greater than he can bear. The flood comes on the world of the ungodly and sweeps them all away. Fire and brimstone descend on Sodom and Gomorrah, till naught but their ashes remain. Lot’s wife, for one act of disobedience, is turned into a pillar of salt.

What a marvelous proof is all this of the Divine Authorship! Who but the One who knows the end from the beginning, could have embodied, in germ form, what is afterwards expanded and amplified in the rest of the Bible? What unequivocal demonstration that there was One superintending mind,directing the pens of all who wrote the later books of Holy Scripture! May the blessing of God rest upon us as we seek to enjoy some of the inexhaustible riches of this book of beginnings.

Christ's Exaltation Purchased by Humiliation (eBook)
Richard Sibbes
An Open Letter to the Hesitant Church-Goer
David Gundersen
4 Ways to Fight Sexual Temptation
Mr Garrett Kell
Fear, Faith, and False Repentance: God Keeps His Promises
Adam Nesmith
On the Divinity of Christ
John Dick
“The Word Did It All”: The Necessity of Preaching According to the Protestant Reformers
Shawn Wright
Why the Ordinary Means of Grace Must Be Central in Our Gatherings
David Strain
3 Practical Ways to Stop Burdening Ourselves to Death
Nicholas T Batzig
When the Imago Dei Goes Astray…
Curated Resources
Opposing Modern History’s Most Persistent Bad Idea: 5 Ways Marxism Is Influencing Us Today
Owen Strachan
When You are Falsely Accused
Blake Long
Abraham Rejoicing to See Christ's Day Afar Off
Ebenezer Erskine
Christ Set Up From Everlasting
Ebenezer Erskine
Mormonism Research Ministry
Curated Resources
Does Mormonism agree that God created all things?
Aaron Shafovaloff
Beware of Twisted Teachers
Josh Buice
Two Steps to Engage Anyone
Alan Shlemon
Why Liturgy Makes Better Preaching
Rhys Laverty
The Church as Israel Expanded and Continued
Chad Bird
The Ancient Resumé of the Holy Spirit: The Work of the Spirit of God in the Old Testament
Chad Bird
Jesus is the True Manna Messiah - John 6, Isaiah 55, Psalm 78
Chad Bird
Irresistible Call
Steven J Lawson
How to Cast Your Cares on God
Doug Eaton
We are Too Slow in Recognizing Our Own Sin
Curated Resources
Are Legalism and Antinomianism Opposites?
Dr Sinclair B Ferguson
Providing for the Household
Andrew J DiNardo
Of The Holy Scripture WCF 1
Nicholas T Batzig
Tiyo Soga – The First Ordained Black South African
Simonetta Carr
In the World, but Not of the World
Ryan Higginbottom
Guilty, Anyone?
Peter Jones
Assurance of Salvation
Thomas Ridgley
Is the Church Necessary?
Ryan McGraw
Truth Corresponds to Reality
R C Sproul
What does it mean to fear the Lord?
Dr. John MacArthur
Election and Foreknowledge
Fred G Zaspel
Foreknowledge and Decree of God
Phil Ryken
Does God Know Everything That Could Possibly Happen?
Blue Letter Bible FAQ
Reformed Critique of Middle Knowledge
Francis Turretin
Calvinism and Foreknowledge – Romans 8:29, 1 Peter 1:2
Reformed Wiki
The Foreknowledge of God
Curated Resources
No Family Is Too Busy for Church
Marshall Segal
We Need Worldview-Confronting Preaching
Adam Nesmith
The Principles Of Reformed Worship
R Scott Clark
Did God Change at the Incarnation?
Keith Mathison
The Ordinary Means of Grace (Series of Essays)
Nine Marks
The 3 Most Important Truths I Learned at Seminary
Pierce Hibbs
The Big Picture of the End Times (YouTube)
James White
A Body of Divinity: Being the Substance of Several Lectures on the Assembly's Larger Catechism
Thomas Ridgley
Of God and His Perfections (eBook)
Thomas Boston
An Exposition of the Assembly's Shorter Catechism (eBook)
Thomas Boston