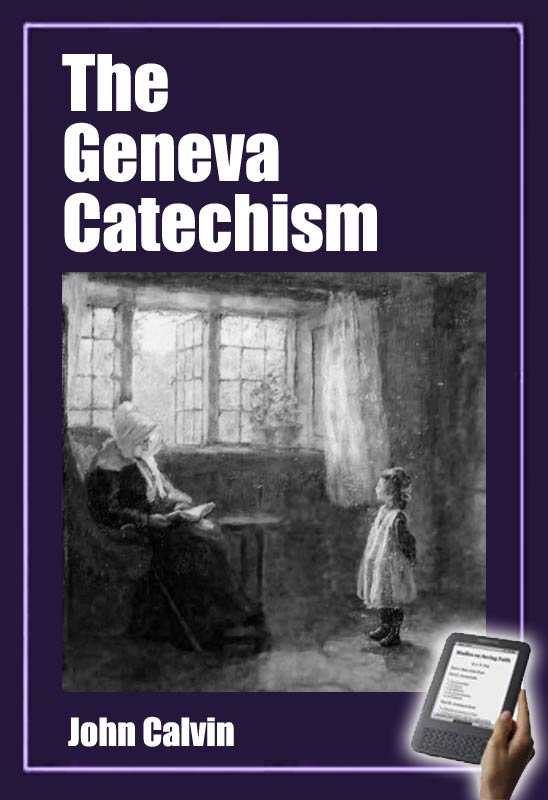 in ePub and .mobi formats

Seeing it becomes us to endeavour by all means that unity of faith, which is so highly commended by Paul, shine forth among as, to this end chiefly ought the formal profession of faith which accompanies our common baptism to have reference. Hence it were to be wished, not only that a perpetual consent in the doctrine of piety should appear among all, but also that one Catechism were common to all the Churches. But as, from many causes, it will scarcely ever obtain otherwise than that each Church shall have its own Catechism, we should not strive too keenly to prevent this; provided, however, that the variety in the mode of teaching is such, that we are all directed to one Christ, in whose truth being united together, we may grow up into one body and one spirit, and with the same mouth also proclaim whatever belongs to the sum of faith. Catechists not intent on this end, besides fatally injuring the Church, by sowing the materials of dissension in religion, also introduce an impious profanation of baptism. For where can any longer be the utility of baptism unless this remain as its foundation — that we all agree in one faith?

Wherefore, those who publish Catechisms ought to be the more carefully on their guard, by producing anything rashly, they may not for the present only, but in regard to posterity also, do grievous harm to piety, and inflict a deadly wound on the Church.

This much I wished to premise, as a declaration to my readers, that I myself too, as became me, have made it my anxious care not to deliver anything in this Catechism of mine that is not agreeable to the doctrine received among all the pious. This declaration will not be found vain by those who will read with candour and sound judgment. I trust I have succeeded at least so far that my labour, though it should not satisfy, will be acceptable to all good men, as being in their opinion useful.

In writing it in Latin, though some perhaps will not approve of the design, have been influenced by many reasons, all of which it is of no use to detail at present. I shall only select such as seem. to me sufficient to obviate censure.

First, In this confused and divided state of Christendom, I judge it useful that there should be public testimonies, whereby churches which, though widely separated by space, agree in the doctrine of Christ, may mutually recognize each other. For besides that this. tends not a little to mutual confirmation, what is more to be desired than that mutual congratulations should pass between them, and that they should devoutly commend each other to the Lord? With this view, bishops were wont in old time, when as yet consent in faith existed and flourished among all, to send Synodal Epistles beyond sea, by which, as a kind of badges, they might maintain sacred communion among the churches. How much more necessary is it now, in this fearful devastation of the Christian world, that the few churches which duly worship God, and they too scattered and hedged round on all sides by the profane synagogues of Antichrist, should mutually give and receive this token of holy union, that they may thereby be incited to that fraternal embrace of which I have spoken?

But if this is so necessary in the present day, what shall our feelings be concerning posterity, about which I am so anxious, that I scarcely dare to think? Unless God miraculously send help from heaven, I cannot avoid seeing that the world is threatened with the extremity of barbarism. I wish our children may not shortly feel, that this has been rather a true prophecy than a conjecture. The more, therefore, must we labour to gather together, by our writings, whatever remains of the Church shall continue, or even emerge, after our death. Writings of a different class will show what our views were on all subjects in religion, but the agreement which our churches had in doctrine cannot be seen with clearer evidence than from catechisms. For therein will appear, not only what one man or other once taught, but with what rudiments learned and unlearned alike amongst us, were constantly imbued from childhood, all the faithful holding them as their formal symbol of Christian communion. This was indeed my principal reason for publishing this Catechism.

A second reason, which had no little weight with me, was, because I heard that it was desired by very many who hoped it would not be unworthy of perusal. Whether they are right or wrong in so judging is not mine to decide, but it became me to yield to their wish. Nay, necessity was almost laid upon me, and I could not with impunity decline it. For having seven years before published a brief summary of religion, under the name of a Catechism, I feared that if I did not bring forward this one, I should cause (a thing ! wished not) that the former should on the other hand be excluded. Therefore if I wished to consult the public good, it behooved me to take care that this one which I preferred should occupy the ground.

Besides, I deem it of good example to testify to the world, that we who aim at the restitution of the Church, are everywhere faithfully exerting ourselves, in order that, at least, the use of the Catechism which was abolished some centuries ago under the Papacy, may now resume its lost rights. For neither can this holy custom be sufficiently commended for its utility, nor can the :Papists be sufficiently condemned for the flagrant corruption, by which they not only set it aside, by converting it into puerile trifles, but also basely abuse it to purposes of impure and impious superstition. That spurious Confirmation, which they have substituted in its stead, they deck out like a harlot, with great splendour of ceremonies, and gorgeous shows without number; nay, in their wish to adorn it, they speak of it in terms of execrable blasphemy, when they give out that it is a sacrament of greater dignity than baptism, and call those only half Christians who have not been besmeared with their oil. Meanwhile, the whole proceeding consists of nothing but theatrical gesticulations, or rather the wanton sporting of apes, without any skill in imitation.

To you, my very dear brethren in the Lord, I have chosen to inscribe this work, because some of your body, besides informing me that you love me, and that the most of you take delight in my writings, also expressly requested me by letter to undertake this labour for their sake. Independently of this, it would have been reason sufficient, that what I learned of you long ago, from the statement of grave and pious men, had bound me to you with my whole soul. I now ask what I am confident you will of your own accord do — have the goodness to consult for the utility of this token of my goodwill towards you! Farewell May the Lord increase you more and more in the spirit of wisdom, prudence, zeal, and fortitude, to the edification of his Church.

What Is Fornication?
Aaron L. Garriott
Kinsman Redeemer
Quentin B. Falkena
Mutilating Our Bodies
Bethel McGrew
Complementarianism, the Regulative principle Holding for all of Life & How We Undermine our own Principle
Stephen Kneale
Not Now: The Surprising Joy of Waiting on the Lord
Lee Hutchings
“Luxury Beliefs”
John Stonestreet
Getting to the End: Finding Faith in the Eternal Promises of God
Benjamin Glaser
How Should Pastors Answer the Question, Is Christianity Good?
Dane C Ortlund
How to Forgive
John Beeson
Vocation and the Christian
Gene Veith
The Importance of a Plurality of Elders
Michael Brown
Breaking Our Addiction to Gossip
John Sartelle
Salt
Rhett Dodson
Eagles’ Wings
Aaron Messner
Sheol
Bryan D Estelle Ph.D
Zion
Matthew Patton
Lord of Hosts
William Boekestein
High Places
Andrew Compton
Hyssop
Michael Barrett
The Doctrine of Justification by Faith
Dr. Martyn Lloyd-Jones
The Authority of Scripture
R C Sproul
How Do We Know What We Know?
R C Sproul
I will tell you plainly about the Father - John 16:25-33
J C Ryle
Bible Verses Have Consequences
George Gillespie
The Lord is My Salvation
Alistair Begg
What Is the Gospel?
Alistair Begg
What Is Unconditional Election?
Nicholas T Batzig
Scotland’s Forgotten Reformation (4-Part Video Series)
Curated Resources
Recovering the Reformed Confession on Resistance
Gregory Baus
Tips for Extemporaneous Preaching from J.W. Alexander
Curated Resources
Jesus Came to Save the World
Curated Resources
You are Welcome to Have Your Faith - As Long as You Don't Believe it.
Bill Muehlenberg
On Legalism and Licence
Bill Muehlenberg
On Statism, Censorship and Free Speech
Bill Muehlenberg
We Must Never Forget: Communism Kills
Bill Muehlenberg
If You Don’t Give Them Jesus Then What’s the Point?
Stephen Kneale
Sin is Only as Hidden as God Allows
Doug Eaton
"The New Public Liturgy"
Carl Trueman
Closeness Comes Through Fire: How Suffering Conforms Us to Christ
Ed Welch
What is a Woman?
Carl Trueman
God is Incomprehensible
Jeffrey Stivason
Footnotes to Lucifer: The 7 Most Destructive Philosophers in Western History
Bruce Ashford
The DEI Regime: Every Fortune 100 company has now adopted “diversity, equity, and inclusion” programming.
Christopher Rufo
Romans 8: Christ Our Security
Stephen Unthank
God is Sovereign
Jacob Tanner
God is All Knowing
Grant Van Leuven
Do People Die Too Soon?
Blake Long
Why We Sleep (And the God Who Doesn’t)
Nick Tucker
Christ's Righteousness, Not Mine (eBook)
Thomas Manton
Parents, Don’t Be Gaslighted by Biased News Reports
Denny Burk