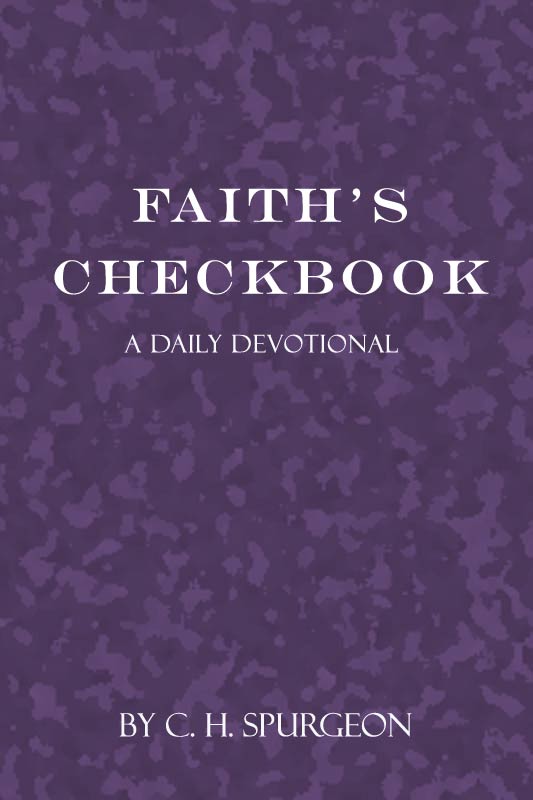 A PROMISE from God may very instructively be compared to a check payable to order. It is given to the believer with the view of bestowing upon him some good thing. It is not meant that he should read it over comfortably, and then have done with it. No, he is to treat the promise as a reality, as a man treats a check.

He is to take the promise, and endorse it with his own name by personally receiving it as true. He is by faith to accept it as his own. He sets to his seal that God is true, and true as to this particular word of promise. He goes further, and believes that he has the blessing in having the sure promise of it and therefore he puts his name to it to testify to the receipt of the blessing.

This done, he must believingly present the promise to the LORD, as a man presents a check at the counter of the Bank. He must plead it by prayer, expecting to have it fulfilled. If he has come to Heaven's bank at the right date, he will receive the promised amount at once. If the date should happen to be further on, he must patiently wait till its arrival; but meanwhile he may count the promise as money, for the Bank is sure to pay when the due time arrives.

Some fail to place the endorsement of faith upon the check, and so they get nothing; and others are slack in presenting it, and these also receive nothing. This is not the fault of the promise, but of those who do not act with it in a common-sense, business-like manner.

God has given no pledge which He will not redeem, and encouraged no hope which He will not fulfill. To help my brethren to believe this, I have prepared this little volume. The sight of the promises themselves is good for the eyes of faith: the more we study the words of grace, the more grace shall we derive from the words. To the cheering Scriptures I have added testimonies of my own, the fruit of trial and experience. I believe all the promises of God, but many of them I have personally tried and proved. I have seen that they are true, for they have been fulfilled to me. This, I trust, may be cheering to the young; and not without solace to the older sort. One man's experience may be of the utmost use to another; and this is why the man of God of old wrote, "I sought the LORD, and he heard me"; and again, "This poor man cried, and the LORD heard him."

I commenced these daily portions when I was wading in the surf of controversy. Since then I have been cast into "waters to swim in," which, but for God's upholding hand, would have proved waters to drown in. I have endured tribulation from many hails. Sharp bodily pain succeeded mental depression, and this was accompanied both by bereavement and affliction in the person of one dear as life. The waters rolled in continually, wave upon wave. I do not mention this to exact sympathy, but simply to let the reader see that I am no dry-land sailor. I have traversed full many a time those oceans which are not Pacific: I know the roll of the billows, and the rush of the winds. Never were the promises of Jehovah so precious to me as at this hour. Some of them I never understood till now; I had not reached the date at which they matured, for I was not myself mature enough to perceive their meaning.

How much more wonderful is the Bible to me now than it was a few months ago! In obeying the LORD, and bearing His reproach outside the camp, I have not received new promises; but the result to me is much the same as if I had done so, for the old ones have opened up to me with richer stores. Specially has the Word of the LORD to His servant Jeremiah sounded exceedingly sweet in mine ears. His lot it was to speak to those who would not hear, or hearing, would nor believe. His was the sorrow which comes of disappointed love, and resolute loyalty; he would have turned his people from their errors, but he would not himself quit the way of the LORD. For him there were words of deep sustaining power, which kept his mind from failing where nature unaided must have sunk. These and such like golden sentences of grace I have loved more than my necessary food, and with them I have enriched these pages.

Oh, that I might comfort some of my Master's servants I have written out of my own heart with the view of comforting their hearts. I would say to them in their trials - My brethren, God is good. He will not forsake you: He will bear you through. There is a promise prepared for your present emergencies; and if you will believe and plead it at the mercy-seat through Jesus Christ, you shall see the hand of the LORD stretched out to help you. Everything else will fail, but His word never will. He has been to me so faithful in countless instances that I must encourage you to trust Him. I should be ungrateful to God and unkind to you if I did not do so.

May the Holy Spirit, the Comforter, inspire the people of the LORD with fresh faith! I know that, without His divine power, all that I can say will be of no avail; but, under His quickening influence, even the humblest testimony will confirm feeble knees, and strengthen weak hands. God is glorified when His servants trust Him implicitly. We cannot be too much of children with our heavenly Father. Our young ones ask no question about our will or our power, but having once received a promise from father, they rejoice in the prospect of its fulfillment, never doubting that it is sure as the sun. May many readers, whom I may never see, discover the duty and delight of such child-like trust in God while they are reading the little bit which I have prepared for each day in the year.

For long years several thousands of God's people have read my MORNING BY MORNING and EVENING BY EVENING, and many of them have been good enough to write me, and acknowledge the benefit of such a perusal. I hope this little book will not interfere with those volumes. These daily portions are gathered from a more varied range of topics, and are all the more profitable because they deal with doctrine, experience, practice, and everything else. This is a sweetmeat of promise only, and it must not interfere with the fuller meals: nay, rather, I hope it will excite a desire for them.

May our LORD Jesus accept this my service for His sheep and lambs, from