Two Hesitations About TULIP.
What is Implied When the Godly Pray: “Lead Us Not into Temptation”
What are the principal propositions that constitute the federal theory?
God Saves Sinners
The Marrow of Modern Divinity (eBook)
Compliance with God‟s Will During Seasons of Affliction
The Church in the World
"He is Altogether Lovely"
Road to Nowhere
What is the Gospel?

Extraordinary Prayer for the Revival of Religion (eBook) 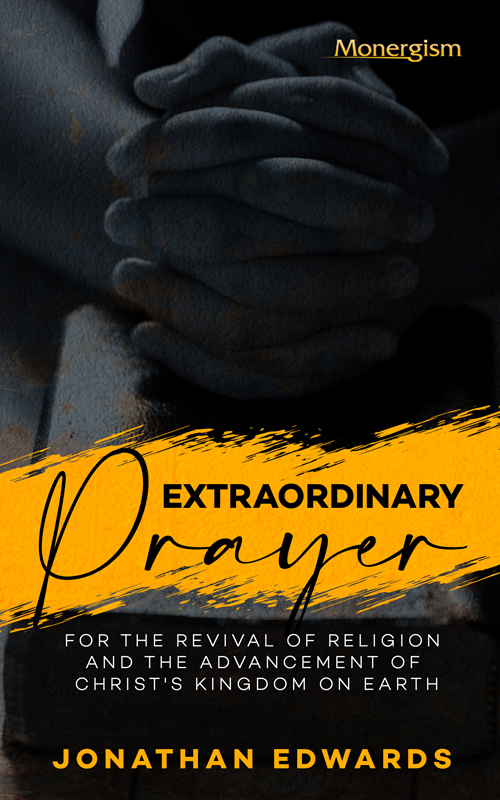 THE following is the original title more at large; which the editors are disposed to preserve, as it contains a more particular exhibition of the nature and design of the work. How suitable the work itself is, in reference to the present state of things, we leave to the reader's own reflection.

"An HUMBLE ATTEMPT to promote an explicit agreement and visible union of God's people through the world, in extraordinary PRAYER, for the REVIVAL of religion, and the advancement of Christ's kingdom on earth, pursuant to scripture promises and prophecies concerning the last time,

THE ruin of Satan's miserable kingdom, and the advancement of the universal and happy reign of Christ on the earth, were included, and hinted at, in the sentence denounced on the serpent, that the seed of the woman should bruise his head. What was a terrible threatening to Satan, in the surprised ears of our first guilty parents, implied a joyful prophecy, to keep them from despair, and enliven their hopes, for themselves and their descendants, of obtaining by this seed of hers an eternal triumph over him who had so sadly foiled them. And it is likely, that their hope and faith immediately arose, laid hold on the reviving prophecy, earnestly desired its happy accomplishment, and transmitted it to their posterity.

But though this prophecy was at first only delivered in the form of a threatening to Satan, it was afterwards directly given in the form of a promise to Abraham, though still in general terms, that in his seed should all the nations of the earth be blessed. Yet this general promise was more clearly by degrees explained in the following ages, to mean a DIVINE KING, no other than the SON OF GOD assuming human nature of the seed of Abraham, Isaac, Jacob, and David; that should be born of a virgin in Bethlehem of Judah; and at first despised, abused, rejected, and put to death; but should rise to immortal life, ascend to heaven, and thence extend his blessed kingdom over all nations; not by outward force, but inward overcoming influence, by his word and Spirit making them his willing people in the day of his power; and reigning in glorious light and holiness, love and peace, for ever: and the advancement of this universal and nappy reign has been the earnest desire and prayer of the saints in all ages to the present day.

But how great the honour, and how lively the encouragement, given in Scripture to those their prayers, by representing them as offered by CHRIST himself with the fragrant incense of his own merits and intercession, on the golden altar before the throne, and ascending together in one grateful perfume to GOD! And how cheering to every saint is that promise, from the rising of the sun, even to the going down of the same, my name shall be great among the Gentiles, and in every place incense shall be offered unto my name, and a pure, offering! How pleasing to GOD and all the heavenly hosts to see, as the sun goes round the globe, this grateful incense rising from every part on high! and the more extensive and incessant are these prayers, ascending from the circle of the earth, the more does this blessed promise go into its desired fulfilment, and the holy GOD is more pleased and glorified. To promote the increase and constancy of these acceptable prayers, is the great intention both of the pious memorial of our reverend and dear brethren, in Scotland, and of the worthy author of this exciting essay. And this design we cannot but recommend to all who desire the coming of this blissful kingdom in its promised extent and glory, in this wretched world.

As to the author's ingenious observation on the prophecies, we entirely leave them to the reader's judgment; with only observing, though it is the apprehension of many learned men, that there is to be a very general slaughter of the witnesses of CHRIST, when about finishing their testimony to the pure worship and truths of the gospel, about three or four years before the seventh angel sounds his trumpet for the ruin of antichrist;—yet we cannot see that this is any just objection against our joint and earnest prayers for the glorious age succeeding, or for the hastening of it.

For if such a terrible time is coming in Europe, which we in depending America are likely to share in; the more need we have of joining in earnest and constant prayers for extraordinary suffering graces for ourselves and others. And that such a time is coming on the members of CHRIST, is no more an objection against their prayers for the hastening of the following glory, than it was before the incarnation of him their head, that his most bitter sufferings were to precede the spreading of this joyous kingdom among nations. And the nearer the day approaches, the more need we have to be awakened to continual watchfulness and prayer.

May GOD pour out on all his people abundantly the Spirit of grace and supplications, and prepare them for the amazing changes hastening on the earth, both for previous trials and for following glories.*

Preface by a former English editor

Preface by the American editors

PART I. The Text opened, and an Account of the Affair proposed

-- II. Observations on the text

-- IV. A Memorial from Scotland

PART II. Motives to Compliance with what is proposed

-- I. The latter-day glory not yet accomplished

-- VI. Motives to excite us to this agreement

-- VII. The beauty and good tendency of such union

-- I. Such agreement superstitious, answered

-- II. Such agreement not whimsical, &c.

-- III. Such agreement not premature

-- IV. The fall of antichrist not very distant

Such Were Some of You - 1 Corinthians 6:9-11
Dr. John MacArthur
Abraham Was Not Moses
R Scott Clark
Why are People Uncomfortable with the Doctrine of Election?
Josh Buice
How to Spot Character in Your Next Pastor
Curated Resources
The “Social Trinity” vs. Nicene Christianity
Gene Veith
Engaging With 1689
R Scott Clark
Gender Questions Should Send Us to Scripture
Thomas Schreine
What Was the Downgrade Controversy Actually All About?
Curated Resources
The Importance of Gathering for Worship
Jon Payne
How to Read Genesis Theologically
Craig Carter
God’s Two Kingdoms
Scott Aniol
The Problem of Moral Evil: Calvinism vs. Molinism
Robin Schumacher
The Phinehas Option: A Pastoral call to Vigilance against Sexual Immorality
Joshua Jenkins
The Bible and Witchcraft
Bill Muehlenberg
The Sorry State of Evangelical Rhetoric
Stephen Wolfe
Preparing Our Children for Babylon
Ligonier Ministries
Who in the world am I preaching to?
Andrew Roycroft
“A Hedging and Fencing”: How Charles Spurgeon Promoted Meaningful Membership
Geoff Chang
Shall We Know One Another
J C Ryle
A Discourse of Christ our Passover (eBook)
Stephen Charnock
15 Quotes from Thomas Watson on Repentance
Thomas Watson
What Happens to Your Soul When You Die?
Kim Riddlebarger
Ligonier 2021 Detroit Conference: Blessed in Christ
W Robert Godfrey, Stephen J Nichols, Burk Parsons, Michael Reeves, Derek Thomas
Who Is the Suffering Servant in Isaiah 53?
Curated Resources
A Written Presentation of the Gospel of Jesus Christ
Dale Partridge
If God Predestines People, Why Evangelize?
Dale Partridge
The Critical Differences Between Calvinism and Arminianism
Dale Partridge
The Puritans and the Old Paths of Christian Piety
Joel R Beeke
Extraordinary Prayer for the Revival of Religion (eBook)
Jonathan Edwards
Coram Deo
Ligonier Ministries
The Function of Perichoresis & the Divine Incomprehensibility
Lane G Tipton
Doctrine of Trinitarian Perichoresis
Curated Resources
Theological Primer: Perichoresis
Kevin DeYoung
What Is Indwelling Sin?
Daniel B. Miller
Adoniram Judson: A Missionary of the Apostolic School (eBook)
Horatius Bonar
Reformed Doctrinal Distinctives
Greg Bahnsen
The Historical Setting of the Writing of Revelation
Greg Bahnsen
Hermeneutics in the Book of Revelation
Greg Bahnsen
What does it mean to “lean not on your own understanding”?
Jesse Johnson
Genesis, Exodus, Isaiah . . . Oh My!—Practical Help for Preaching Longer Books
Nine Marks
Sovereignty and Everyday Life
J Paul Tanner
Transgender or Pretendgender?
Jeffrey Stivason
Men: A Plan for Simple but Hard Discipleship
David E Prince
Revelation and the End of All Things
Bill Muehlenberg
Eternal Punishment (eBook)
A W Pink
The Glory of the Redeemer (eBook)
Octavius Winslow
Is Deconstruction the Same as Deconversion? A Few Reflections on Reforming the Church
Michael J Kruger
How Reformed Theology Is Changing Latinos in Chicago
Curated Resources
The Necessity of Justification
Dr Michael S Horton
Most Men Don’t Have Real Friends (But Need Them)
John Stonestreet