The Extent of Secular Authority (eBook) 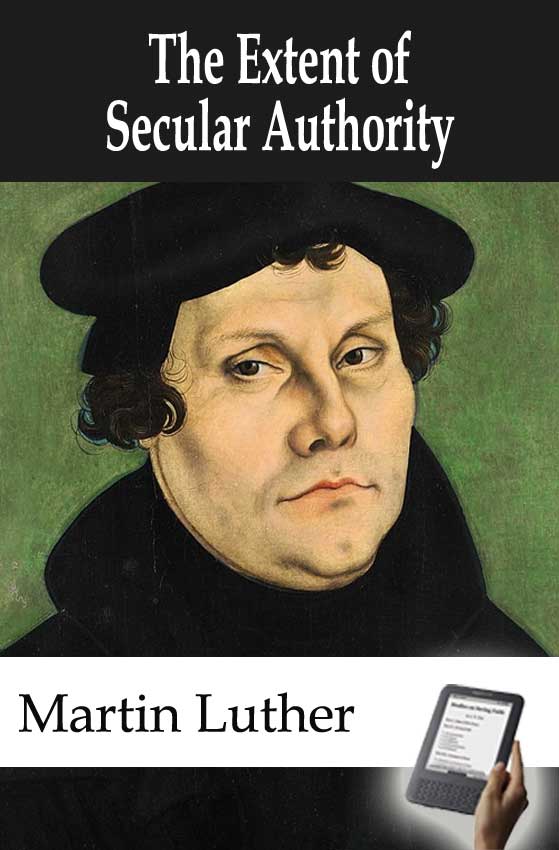 Luther faced a condition, not simply a theory. He faced the theory of the temporal power of the Church. He also faced the fact that he had protested against the one and defied the other at Worms. Now matters were to be put to the test. The diet had put Luther under the ban of the empire. The Council of Regency, by edict of January 20, 1522, demanded that severe measures be taken to carry out the edict of Worms. It gave assurance of temporal aid. It was now over a year since Luther’s books had been burned. In the Netherlands adherents of Luther had lately been imprisoned and threatened with death.1 Only that Autumn, after the appearance of his translation of the New Testament, the Dukes of Bavaria, the Elector of Brandenburg, and Duke George of Saxony issued strict orders against the sale and use of the book. Luther knew that the princes were plotting against his life. How should a Christian conduct himself toward such rulers and their power? This set Luther thinking on the questions involved in our treatise.

Again, during his absence at the Wartburg the question had arisen in Wittenberg concerning the interpretation of passages like Mat 5:39 and Rom 12:19.2

The Roman Catholic interpretation was that these are counsels for the perfect,3 not precepts for all Christians. His answer to Melanchthon from the Wartburg was that the Gospel had nothing to do with the power of the sword, that secular authority was not necessary if all were Christians, but that it must be maintained because of sin. Whence then is the Church’s secular authority? In the Open Letter to the Christian Nobility he had denied this authority, and had there defined the separate and distinct spheres of Church and State. It was necessary to reaffirm what he had said then, and also to maintain the divine character of the State against the fanatics who forbade civil offices to Christians.4 The basis of our treatise is to be found in the third and fourth of the six sermons preached October 19, 24, 25 and 26, 1522, at Weimar, in the presence of Duke John of Saxony. At the request of the court preacher, Wolfgang Stein, Duke John, and others, Luther undertook the publication of the material. He could not commence the work before the middle of December. Duke George’s order against the sale of Luther’s New Testament, dated November 7, 1522, may have hastened Luther’s efforts.

That material grew under his pen into our present treatise, dedicated to Duke John and dated New Year’s Day, 1523. By New Year, Luther undoubtedly means Christmas, as he does in his Christmas hymn, “Vom Himeel hoch.” The date of the treatise, then, is December 25, 1522. It did not appear, however, until March, 1523, for Duke George complains of it to Elector Frederick on March 21st of that year.5 The treatise is divided into three parts. In the first part Luther shows, as he had in the Open Letter to the Christian Nobility, that secular authority is ordained by God. Christ’s words in the Sermon on the Mount are binding on all Christians and refer to personal revenge. They do not forbid even Christians to bear the sword for the sake of others, and to curb wickedness. Like the oath, the sword is not needed among Christians.

The main line of discussion is contained in the second part. This takes up the question, in how far secular authority should be obeyed. Its sphere is the kingdom of the world over against the kingdom of God. It is not to invade the latter sphere. Faith is a matter of the individual conscience. God alone bears rule over the soul. God is to be obeyed rather than man. Bishops rule by applying God’s Word. Christians are to be ruled by nothing but God’s Word.

In the third part are found the remnants of the sermon preached at Weimar. Here Luther instructs the princes how to conduct themselves toward God, toward their subjects, toward their counselors, and toward evil doers. He speaks as the father confessor of the prince.

Our treatise is of political as well as religious significance. It maintains the right of private judgment over against Church and State. It is the first ethical defense of government over against the current Roman Catholic conception, which traced all authority to the Church. It gave the world a new theory of the State, separated State from Church, and made the function of the State the service of its people.

SECULAR AUTHORITY –  PART ONE: TO WHAT EXTENT IT SHOULD BE OBEYED.

1. Establishing Secular Law and the Sword

2. Non-Resistance to the Law

4. The Government of Non-Christians

6. May Christians Bear the Secular Sword?

2. Commandments cannot be imposed where there is no power.

3. Every man is responsible for his own faith.

4. Only God has power and authority over souls.

5. The Church and not the State is the arbiter of heresy.

6. The State and not the Church wields the Sword.

SECULAR AUTHORITY –  PART THREE: HOW IT SHOULD BE USED

1. The Secular Ruler must consider his subjects.

2. The Secular Ruler must beware his counselors.

3. The Secular ruler must take heed that he deals justly with evil doers.

4. The Secular Ruler must subject himself to God.

A FINAL WORD ABOUT RESTITUTION.

On the Divinity of Christ
John Dick
“The Word Did It All”: The Necessity of Preaching According to the Protestant Reformers
Shawn Wright
Why the Ordinary Means of Grace Must Be Central in Our Gatherings
David Strain
3 Practical Ways to Stop Burdening Ourselves to Death
Nicholas T Batzig
When the Imago Dei Goes Astray…
Curated Resources
Opposing Modern History’s Most Persistent Bad Idea: 5 Ways Marxism Is Influencing Us Today
Owen Strachan
When You are Falsely Accused
Blake Long
Abraham Rejoicing to See Christ's Day Afar Off
Ebenezer Erskine
Christ Set Up From Everlasting
Ebenezer Erskine
Mormonism Research Ministry
Curated Resources
Does Mormonism agree that God created all things?
Aaron Shafovaloff
Beware of Twisted Teachers
Josh Buice
Two Steps to Engage Anyone
Alan Shlemon
Why Liturgy Makes Better Preaching
Rhys Laverty
The Church as Israel Expanded and Continued
Chad Bird
The Ancient Resumé of the Holy Spirit: The Work of the Spirit of God in the Old Testament
Chad Bird
Jesus is the True Manna Messiah - John 6, Isaiah 55, Psalm 78
Chad Bird
Irresistible Call
Steven J Lawson
How to Cast Your Cares on God
Doug Eaton
We are Too Slow in Recognizing Our Own Sin
Curated Resources
Are Legalism and Antinomianism Opposites?
Dr Sinclair B Ferguson
Providing for the Household
Andrew J DiNardo
Of The Holy Scripture WCF 1
Nicholas T Batzig
Tiyo Soga – The First Ordained Black South African
Simonetta Carr
In the World, but Not of the World
Ryan Higginbottom
Guilty, Anyone?
Peter Jones
Assurance of Salvation
Thomas Ridgley
Is the Church Necessary?
Ryan McGraw
Truth Corresponds to Reality
R C Sproul
What does it mean to fear the Lord?
Dr. John MacArthur
Election and Foreknowledge
Fred G Zaspel
Foreknowledge and Decree of God
Phil Ryken
Does God Know Everything That Could Possibly Happen?
Blue Letter Bible FAQ
Reformed Critique of Middle Knowledge
Francis Turretin
Calvinism and Foreknowledge – Romans 8:29, 1 Peter 1:2
Reformed Wiki
The Foreknowledge of God
Curated Resources
No Family Is Too Busy for Church
Marshall Segal
We Need Worldview-Confronting Preaching
Adam Nesmith
The Principles Of Reformed Worship
R Scott Clark
Did God Change at the Incarnation?
Keith Mathison
The Ordinary Means of Grace (Series of Essays)
Nine Marks
The 3 Most Important Truths I Learned at Seminary
Pierce Hibbs
The Big Picture of the End Times (YouTube)
James White
A Body of Divinity: Being the Substance of Several Lectures on the Assembly's Larger Catechism
Thomas Ridgley
Of God and His Perfections (eBook)
Thomas Boston
An Exposition of the Assembly's Shorter Catechism (eBook)
Thomas Boston
Why Wokeness is a Christian Heresy
John Stonestreet
The Fall
Barry Cooper
Exchanging Truth for a Lie: Image, Idolatry, and the People of God
Dr. Ben Gladd
Prayer and the Ministry of the Word
H.B. Charles Jr.