Experimental and Practical Views of the Atonement (eBook) 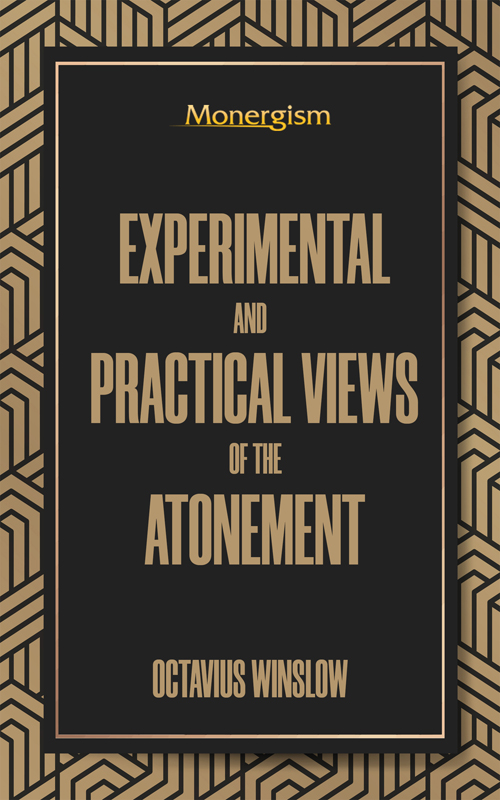 "He that believeth on the Son of God hath the witness in himself." 1 John 5:10

THIS unpretending little volume forms the commencement of a series of similar works which it is the author's design, should the Lord permit, to publish upon the important subject of experimental religion, under the general title of, "EXPERIMENTAL AND PRACTICAL VIEWS OF DIVINE TRUTH." Various considerations, to one or two of which, he may be permitted to allude, suggested the undertaking, and pleaded for its execution. The first that may be mentioned was, the vast and solemn importance of the subject.

The religion of the Lord Jesus is valuable only as its power is experienced in the heart. In this respect, and in this only, it may be compared to the physical sciences which, however ingenious in structure, or beautiful in theory; yet if not reduced or reducable to purposes of practical use, are of little worth. It is so with the truth of Jesus. The man of mere taste may applaud its external beauty—the philosopher may admire its philosophy, the orator its eloquence, and the poet its poetry, but if the Spirit of GOD take not HIS own truth and impress it upon the heart, as to the great design of its revelation, it avails nothing. What numbers are there who rest in the mere theory of Christianity. As a practical principle they know nothing of it. As a thing experienced in the heart, it is a hidden mystery to them. They speak well of it as a religious system—believe its Divinity, and even defend its doctrines and extol its ethics: yet, make no approaches towards a personal and practical obedience to its claims. In a word, they know nothing of repentance towards God, and faith towards our Lord Jesus Christ. It will surely appear to a spiritually enlightened mind, a subject of vast and solemn moment that, this delusion should be exposed—that, this foundation of sand should be undermined, and the absolute necessity of experimental religion, as necessary to an admission within the kingdom of glory, be strenuously and scripturally enforced.

Another consideration which had its weight with the author's mind was, the conviction that the state of the church demanded a more spiritual, experimental and practical exhibition of Divine truth. To those who have been silent, though sad, spectators of the recent history of the American Church, it is known that controversies of an alarming character have, for a lengthened period, existed in her bosom. They have seen and deplored the divisions that have rent her—the party feeling that has been engendered, the alienation and distance that have existed among those who holding one Head, should therefore, "love as brethren." To mitigate this alarming evil, to heal these divisions, and to draw the different sections of the church more closely together, various able disquisitions have been written, many ingenious plans have been proposed, and many affecting appeals have been made. But, it is the author's honest conviction that, the first and the chief step towards the accomplishment of an end so earnestly to be sought, and so fervently to be prayed for, is to, deepen the spirituality of the churches of each evangelical denomination. Nothing short of this will bring it about. Vain will be all expectation of returning to an Apostolic union—fruitless will be every plan for a coalition of sects while the spirituality of the church is at so low an ebb. But, augment the true piety of the churches—hold up a more elevated standard of holiness—let them be deeply baptized in the reviving and sanctifying influences of the Holy Spirit, and these controversies will all terminate, these divisions will all be healed, and the din and the strife of party interests will speedily be hushed. Christians will not hold less firmly, and defend less zealously their conscientious views of truth, but they will hold and speak the truth in love. In order then thus to strengthen the tone of spirituality among the churches, experimental and practical religion must be more frequently and earnestly insisted upon. There cannot possibly exist genuine piety apart from experimental truth, and in proportion to the deep experience of the truth, will be the depth of spirituality.

It will suffice to mention but one other consideration which influenced the author in the preparation of these works, and that was, the demand which the church herself has made for writings of this class. The church is wearied with controversy. There is a restlessness, a growing desire for publications of a less polemical and more spiritual and experimental character, which it is important should be met. There are those, and the number is increasing, who are hungering and thirsting for the simple truth of God, broken up and presented to them unmixed with the bitter herbs of controversy and discussion. They want God's truth as it is. They want it so opened and explained as to meet the daily experience of the christian life.—The inward and the outward conflicts—the deep affliction, the heavy cross, all of which demand an experimental unfolding of the doctrines and truths of the Bible. And there is a sweetness and preciousness in Divine truth thus exhibited, which controversy tends much to impair. The father of the inductive philosophy, truly and beautifully remarks, "As those wines which flow from the first treading out of the grapes, are sweeter and better than those forced out of the press, which gives the roughness of the husk and of the stone; so are those doctrines best and wholesomest which flow from a gentle crush of the Scriptures, and are not wrung into controversies."*

To meet in some degree this demand, has been the humble attempt of the author. How far he has proved successful, the experienced believer must decide. He has commenced with the doctrine of the Atonement of Christ, it being the central truth of the Bible, on which all others are based, and around which they all entwine. The second volume in the series will embrace "EXPERIMENTAL AND PRACTICAL VIEWS OF THE WORK OF THE HOLY SPIRIT, and will appear, should the author's life and health be preserved, early in the ensuing autumn. Should the Lord, in a solitary instance, condescend to bless the perusal of this work, let all the praise and the glory redound to the Father, Son, and Holy Ghost, the Triune Jehovah, to whom it alone belongs.

INTRODUCTION: The Province of Reason in the investigation of Spiritual and Experimental Truth

CHAPTER I: The Spiritual and Experimental Character of the Atonement: Inexplicable to the Unregenerate

CHAPTER II: The Atonement in its relation to the Godhead of Christ

CHAPTER III: The Speciality of the Design of the Atonement

CHAPTER IV: The Freeness of the Atonement

CHAPTER V: The Sympathy of the Atonement

CHAPTER VI: The Fearful Alternative of Rejecting the Atonement