The Everlasting Rest of the Saints in Heaven (eBook) 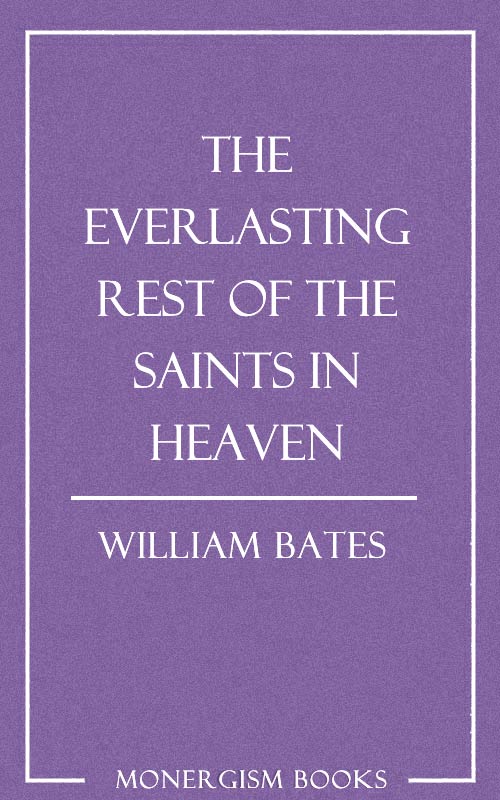 There remaineth therefore a rest to the people of God. - Heb. 4:9.

The coherence of the words. The doctrine and method of handling it propounded."

THE words are an inference from the foregoing part of the chapter, wherein the apostle doth by illustration and proof make a discovery to us of the future state of rest for the people of God. He makes use of a double illustration for this.

1st. God's sacred rest from the works of creation, from the 4th verse. "And God did rest the seventh day from all his works;" that is, after God had perfected the invisible and visible world, on the review of all his works, finding them very good, he took pleasure, he was satisfied in all those discoveries of his own perfections in the works of his hands; and this is said to be his rest. God always enjoyed his own glory and blessedness even from eternity: but this rest here spoken of, hath respect to the precedent work of creation, and that joyful reflection that God made upon his own works; because they were according to the model of his infinite wisdom, he was infinitely pleased in them. Now this divine rest is produced here as an illustration of that rest that the saints shall enjoy in heaven, after all their works done for the glory of God here on earth.

2nd. The second illustration is from the rest that was promised to the Israelites in the land of Canaan; and the apostle speaks of this in the first verse, "let us therefore fear, lest a promise being made of entering into his rest, any of you should seem to come short of it." And in the foregoing chapter he had been treating of this rest. They were at first harassed in Egypt with cruel oppression, and they were to pass through a waste and wild wilderness, wherein they were to have many hard and difficult journeys. To those that did believe, and obey according to that belief, Canaan was promised as a land of rest. Now this temporal Canaan was but a type of the heavenly Canaan, the land above, that flows indeed with milk and honey; that is, where holiness, and joy, and pleasure, are for ever in perfection. Now, saith the apostle, the earthly Canaan was to be a representative of that country above, which is prepared for the people of God. And indeed this was the wisdom of the Holy Spirit of God, to raise the thoughts and desires of men by temporal things to those which are eternal. This is the double illustration. The proof which the apostle urgeth here, that there is still a rest remaining for the people of God, is from hence, that after the Israelites were possessed of Canaan, yet the royal prophet David speaks of another rest, that unbelievers should be excluded from, and that believers should obtain. "Again, he limiteth a certain day, saying in David, to-day after so long a time as it is said, to-day, if you will hear his voice, harden not your hearts; for if Jesus had given them rest, then would he not after have spoken of another day; there remaineth a rest therefore to the people of God." If you will be obedient to his call, do not harden your hearts, through infidelity; if you will believe and be holy, you shall come to this rest, that indeed deserves that name, not like the rest in the land of Canaan. If indeed he had given them rest, David would not have spoken of another rest. If we had been possessed of it in the land of Canaan, David would not have said, if you remain in disobedience and infidelity you shall not enter into it, but if you be obedient you shall possess it. But seeing David hath said so, I conclude, saith the apostle, "there remains therefore a rest to the people of God." The words that I have read to you do contain that which is the most powerful and the most comfortable motive to believe and obey the gospel, and to persevere in it, that can be offered to you, especially considering the state we are in of strangers, and of a continual warfare; there is nothing can be more desirable than to hear this, and that can give more vigour to our souls in the ways of God. There is an expression of Solomon applicable to this purpose, "as cold waters to the thirsty soul, so is good news from a far country." This is good news from heaven, the country above, therefore infinitely refreshing to us in all the heat, trouble and toil that we are engaged in, in this suffering world; "there remaineth therefore a rest to the people of God."

I. Description of the people of God.

II. Heaven is the Place of this rest.

III. The Excellency of this Rest.

IV. The second excellency of this rest. It is a joyful rest.

VII. The third excellency of this rest. It is eternal.

VIII. The love of God and the sufferings of Christ are the causes of bestowing this rest.

IX Proofs that this rest is reserved for the people of God from his immutability, justice, special love, and power

X. APPLICATION of the subject. The first use. How dreadful will be the future state of God's enemies.

XI. The second use. Learn the vanity of this world.

XII. The third use. The hope of this rest should fortify us against present afflictions

XIII. The fourth use. This rest affords consolation to the saints in their conflict with death.

XIV. The fifth use. The subject affords comfort in the death of holy friends

XV. The sixth use. Exhortation to Prepare for this Rest.