An Essay on the Kingdom of Christ (eBook) 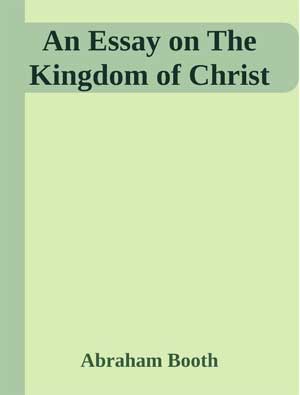 THE Kingdom of Christ is a subject of great importance: for, according to the views we have of that Kingdom, will our conclusions be respecting various branches of religious conduct. If those views be imaginary, these conclusions must be false. By the former, the glory of Messiah's regal character will be obscured: by the latter, his worship will be corrupted: whereas the true doctrine concerning this holy empire may not only be the mean of preserving from those evils, but of presenting us with data for the decision of many disputes among the professors of Christianity. A competent acquaintance, therefore, with its nature and laws, its emoluments and honours, re closely connected with our duty and our happiness: which acquaintance must be derived from Divine Revelation.

Important, however, as the subject manifestly is; it has been but seldom professedly discussed. This consideration was a leading motive to the present attempt. To illustrate the nature of our Lord's Kingdom, and to infer the conclusions stowing from it, constitute the design of this Essay.

The Author has expressed his thoughts with great freedom; yet without intending the least offence to any party of Christians, or to any person, from whose notions and practices he conscientiously differs. In the course of discussion he animadverts, indeed, on some particulars, with a degree of severity; but then they appear to him m the light of political artifices, which either impeach the dominion of Christ in his own kingdom; or degrade and corrupt that worship which he requires. Now, in cases of this kind, the writer is of opinion, that allegiance to the King Messiah, and true benevolence to man, demand the language of marked opposition.

Such is the nature of our Lord’s empire, that few of his loyal subjects can seriously reflect upon it, without feeling themselves both delighted and reproved. Delighted: because it is for the honour of their Mediator, to be the Sovereign of a spiritual monarchy. A character of this kind apparently suits the dignity of his Person, the design of his mediation, and the riches of his grace. – Reproved: because they daily find a want of that spirituality in their affections, and of that heavenly-mindedness, which become the professed subjects of such a kingdom. When meditating on the characteristics of this holy empire, they stand convicted before its divine Sovereign of much carnality and worldly-mindedness, over which they sincerely mourn: while merely nominal subjects of the King Messiah, or superficial professors of the gracious gospel, are but little concerned about the state of their hearts, in reference to heaven; or with regard to the spirituality of their worship.

This being the case with multitudes, the author would not be much surprised were various particulars in the following pages to prove disgusting to the taste of numbers professing godliness. But facts are stubborn things; and the sayings of Jesus Christ must not be explained away, that conscience may rest in a false, peace, or that the public taste may he gratified. For, when thinking of our sublime Sovereign, Thy Kingdom Come, is the language of every upright heart, let carnal professors and the profligate world say what they please.