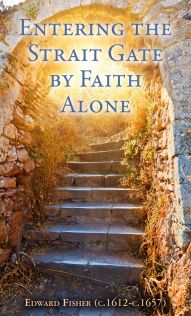 Entering the Strait Gate by Faith Alone is an excerpt from The Marrow of Modern Divinity by Edward Fisher (c.1612-c.1657). The Marrow influentially stated the doctrine of unconditional grace, advocating a free offer of the gospel without condition. It was at the center of the later Marrow Controversy.

The following treatise is taken from the book The Marrow of Modern Divinity (free eBook) written by Edward Fisher of Scotland in 1646.

Of the many lives and ministries greatly affected by The Marrow, one of note was that of Thomas Boston (1676-1732),1 a great divine2 who adorned the ecclesiastical and theological scene in Scotland.

It was while Boston was at Simprin that a copy of Fisher’s Marrow came into his hands. The book was to have a profound effect upon him. He wrote: “I rejoiced in it as a light which the Lord had seasonably struck up to me in my darkness.” Up to this time Boston had felt a certain inhibition in proclaiming the free and universal offer of Christ to men. This inhibition arose from the supposed antinomy3 between the decree of election and the indiscriminate offer of salvation to all men. But once he had grasped the formula, according to the theology of The Marrow, that “Jesus Christ is the Father’s deed of gift and grant unto all mankind lost,” his inhibition faded away, and he began to preach with a fullness and freeness he had hitherto not known. His parishioners could not fail to recognize the deep transformation in their pastor and his ministrations.

In a letter to Mr. James Hog (a well-respected fellow minister), Thomas Boston wrote, “As to any distinct uptakings4 of the doctrine of the Gospel I have, such as they are, I owe them to that book.”

And it was in 1717 that James Hog penned these words in his own form of praise of Fisher’s Marrow, “This book came into my hand by a merciful and most unexpected disposure of providence, and I read it with great and sweet complacence5...Here we have the greatest depths, and most painted delusions of hell, in opposition to the only way of salvation, discovered with marvelous brevity and evidence...When gospel light is clear, and attended with power, Satan’s kingdom cannot stand before it; the prince and powers of darkness must fall as lightning from heaven.”

The following is written as a dialog among four characters: EVANGELISTA, a Minister of the Gospel; NOMISTA, a Legalist; ANTINOMISTA, an Antinomian;6 NEOPHYTUS, a Young Christian.

Introduction
1. The Errors of Nomista
2. The Fears of Neophytus
3. Faith before Repentance
4. Coming to Christ