The Emotional Life of Our Lord (eBook) 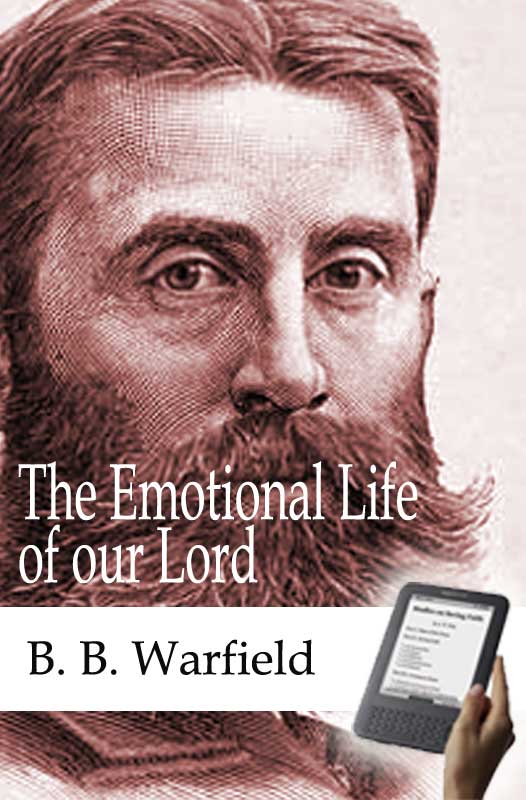 It belongs to the truth of our Lord’s humanity, that he was subject to all sinless human emotions.l In the accounts which the Evangelists give us of the crowded activities which filled the few years of his ministry, the play of a great variety of emotions is depicted. It has nevertheless not proved easy to form a universally acceptable conception of our Lord’s emotional life. Not only has the mystery of the Incarnation entered in as a disturbing factor, the effect of the divine nature on the movements of the human soul brought into personal union with it has been variously estimated. Differences have arisen also as to how far there may be attributed to a perfect human nature movements known to us only as passions of sinful beings.

Two opposite tendencies early showed themselves in the Church. One, derived ultimately from the ethical ideal of the Stoa, which conceived moral perfection under the form of apatheia, naturally wished to attribute this ideal dira0eaa to Jesus, as the perfect man. The other, under the influence of the conviction that, in order to deliver men from their weaknesses, the Redeemer must assume and sanctify in his own person all human patha, as naturally was eager to attribute to him in its fulness every human pathos. Though in far less clearly defined forms, and with a complete shifting of their bases, both tendencies are still operative in men’s thought of Jesus. There is a tendency in the interest of the dignity of his person to minimize, and there is a tendency in the interest of the completeness of his humanity to magnify, his affectional movements. The one tendency may run some risk of giving us a somewhat cold and remote Jesus, whom we can scarcely believe to be able to sympathize with us in all our infirmities. The other may possibly be in danger of offering us a Jesus so crassly human as scarcely to command our highest reverence. Between the two, the figure of Jesus is liable to take on a certain vagueness of outline, and come to lack definiteness in our thought. It may not be without its uses, therefore, to seek a starting point for our conception of his emotional life in the comparatively few2 affectional movements which are directly assigned to him in the Gospel narratives. Proceeding outward from these, we may be able to form a more distinctly conceived and firmly grounded idea of his emotional life in general.

It cannot be assumed beforehand, indeed, that all the emotions attributed to Jesus in the Evangelical narratives are intended to be ascribed distinctively to his human soul.3 Such is no doubt the common view. And it is not an unnatural view to take as we currently read narratives, which, whatever else they contain, certainly present some dramatization of the human experiences of our Lord.4 No doubt the naturalness of this view is its sufficient general justification. Only, it will be well to bear in mind that Jesus was definitely conceived by the Evangelists as a two-natured person, and that they made no difficulties with his duplex consciousness. In almost the same breath they represent him as declaring that he knows the Father through and through and, of course, also all that is in man, and the world which is the theatre of his activities, and that he is ignorant of the time of the occurrence of a simple earthly event which concerns his own work very closely; that he is meek and lowly in heart and yet at the same time the Lord of men by their relations to whom their destinies are determined, — “no man cometh unto the Father but by me.” In the case of a Being whose subjective life is depicted as focusing in two centers of consciousness, we may properly maintain some reserve in ascribing distinctively to one or the other of them mental activities which, so far as their nature is concerned, might properly belong to either. The embarrassment in studying the emotional life of Jesus arising from this cause, however, is more theoretical than practical. Some of the emotions attributed to him in the Evangelical narrative are, in one way or another, expressly assigned to his human soul. Some of them by their very nature assign themselves to his human soul. With reference to the remainder, just because they might equally well be assigned to the one nature or the other, it may be taken for granted that they belong to the human soul, if not exclusively, yet along with the divine Spirit; and they may therefore very properly be used to fill out the picture. We may thus, without serious danger of confusion, go simply to the Evangelical narrative, and, passing in review the definite ascriptions of specific emotions to Jesus in its records, found on them a conception of his emotional life which may serve as a starting-point for a study of this aspect of our Lord’s human manifestation.

The establishment of this starting-point is the single task of this essay. No attempt will be made in it to round out our view of our Lord’s emotional life. It will content itself with an attempt to ascertain the exact emotions which are expressly assigned to him in the Evangelical narrative, and will leave their mere collocation to convey its own lesson. We deceive ourselves, however, if their mere collocation does not suffice solidly to ground certain very clear convictions as to our Lord’s humanity, and to determine the lines on which our conception of the quality of his human nature must be filled out.

Extent of the Atonement
William Cunningham
Richard Muller on Amyraut
Richard Muller
A Tale of Two Wills: Calvin and Amyraut on Ezekiel
Richard Muller
Richard Muller on Hypothetical Universalism & the Reformed Tradition
Richard Muller
Smartphones and Fallen Natures
Doug Eaton
Discard Entanglements
Rev D Patrick Ramsey
An Impending Danger
Curated Resources
What Lewis Had Wrong about Hell
Curated Resources
The influence game
Janie B. Cheaney
Clinging to God and Grammar
Carl Trueman
The Hidden Harm of Gender Transition
Sharon James
Three Encouragements for a Courageous Life
Isaías Muñoz
Opening Blind Eyes to the Truth about Sex-Trafficking in America
Curated Resources
It Is Finished: Beholding the Cross of Christ from All of Scripture
David Schrock
God’s Love for the Believer is as. . .
Nicholas T Batzig
Proof of God?
Joseph Minich
A Complete Collection of Farewell Sermons (eBook)
Various Pastors
Calvinism and the Doctrine of Philosophical Necessity
William Cunningham
Man’s Creation in a Holy but Mutable State
John Howe
God’s Foreknowledge of Man’s Voluntary Actions does not Necessitate the Will of Man
Stephen Charnock
How Should We Respond to the Book of Revelation?
Dennis E Johnson
Bring Back Foxe’s
Darryl Dash
Fighting Human Trafficking in Your City
Curated Resources
Creeds and Confessions: What’s the Difference?
Curated Resources
Who Will ‘Stand in the Gap’?
D A Carson
Ten Words That Changed Everything About My Suffering
Joni Eareckson Tada
Gnosticism and Naturalism: Why We Must Reject Both!
Craig Carter
How do I read the Old Testament historical books devotionally?
Samuel Lee
The Family Expositor - Romans (docx)
Philip Doddridge
An Election of Particular Persons
Benjamin Keach
How Sins are Removed in Justification
Samuel Rutherford
Of the Conditionality of the New Covenant.
John Flavel
How Christians answer to the call of Christ, and so come to have Fellowship with him
John Ball
How Christ Doth Bring His People into Covenant with Himself
John Ball
A Treatise of the Covenant of Grace
John Ball
One Overlooked Danger in Christian Parenting
Trevin Wax
Christian Identity according to the Apostle Paul
Matthew Adams
The Effectual Truth of Identity Politics
Curated Resources
Concerning the One True God’ & ‘Of God the Father
Zacharias Ursinus
Propositions and Principles of Divinity
Curated Resources
The True God Opposed, Exclusively, To All the God's of the Heathen
John Calvin
Christian Liberty
Fred A Malone
What is Christian Liberty?
George Gillespie
Of Christian Liberty and Liberty of Conscience
Pastor Bob Burridge
Christian Liberty and Liberty of Conscience
Brian Schwertley
Christian Liberty and Liberty of Conscience
John Battle
Christian Liberty and Liberty of Conscience
Tom Nettles
Pastor, Defend Christian Liberty
Caleb Greggsen
What is Christian Liberty?
Mike Ratliff
Liberty vs. Law?
Burk Parsons