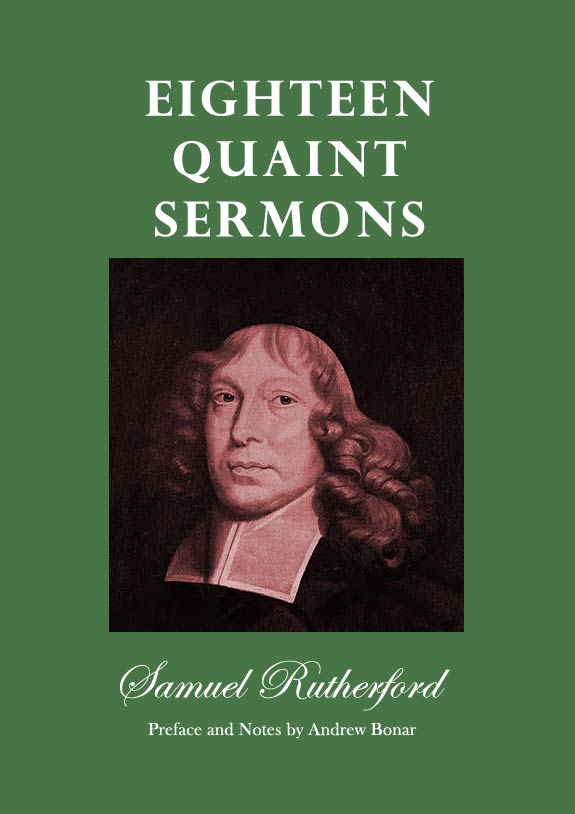 SAMUEL RUTHERFORD'S "Letters" are known in the churches everywhere; and here are notes of his preaching. These sermons, as quaint as his "Letters" in some respects, have never till now appeared in print. They form part of a manuscript volume in which are included other sermons of the same author that have already been published. They are carefully and neatly written in the old style of handwriting. Who it was who took down the notes of these sermons at the time, and who it was that gathered all together into the volume, we do not know. One thing is certain, viz., he was a most attentive hearer and a faithful attender on the minister's preaching; for at p. 232 he notes that he had the misfortune to miss one sermon in the course by absence. It is something of a guarantee for the authenticity of the whole to find, as we do on a close examination, that the first half of the MS. collection contains the discourses that have already been published, but in a much more archaic spelling, and with Scotch words that must have been modernised in the printed copies. Besides, the character of the somewhat peculiar penmanship suggests that it is quite possible the writer was a cotemporary of Rutherford, and not a mere transcriber of original notes.

This MS. volume of which we speak has been a sort of heirloom in the family of one who knew its value, viz., the Rev. David Russell, for fifty-seven years an earnest minister of Christ, first in Hawick and then at Errol, in Perthshire, in connection with the "Relief" and "United Presbyterian" Church. About six years ago his son, James Eccles Russell, Esq., London, was led to tell me of the manuscript volume, and to let me examine it. Other friends also became interested in it, and the result was that Mr. Russell kindly agreed, at the suggestion of these friends, that the portion of it which as yet had not appeared in print should be published. A greatly esteemed brother in the ministry, Mr. J. H. Thomson, of the Free Church, Hightae, skilled above many in deciphering such documents, and in fullest sympathy with the spirit of the author, was not loath to spend time and labour in preparing the work for the press.

The Discourses are throughout characteristic of the man. Try, for example, the lecture on John 20:1–9. Christian reader, you may glean many a sheaf of the finest of the wheat in these fields. Samuel Rutherford never fails to set Christ on high, for truly he had—

"A thirst no earthly stream could satisfy—

A hunger that must feed on Christ, or die." 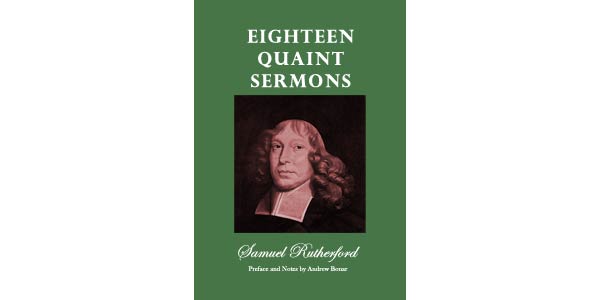 IN transcribing the sermons from the manuscript volume, a faithful reproduction has been the great aim. The proof sheets have also been carefully compared with the manuscript volume. In transcribing, it has not been thought necessary to reproduce the original spelling, which is plainly that of the first half of the seventeenth century, such as "behooved" for "behoved," "bot" for "but," "considder" for "consider," "heir" for "here," "lyke" for "like," "noblie" for "nobly," "sall" for "shall," "sould" for "should," "sweit" for "sweet," "whilk" for "which," "wold" for "would," &c.; but the Scotch, or Northern English words, amounting to about 400, have been carefully retained. Notes explanatory of their meaning are printed at the foot of each page.

Perhaps the most remarkable feature about the following sermons is the apparent correctness with which they have been taken down from the lips of Rutherford. The proper names, and the one or two Latin phrases that occur, are always correctly given, so that their writer must have been an educated man, and, from the skill with which he has caught the line of thought, in full sympathy with the preacher. There is no sign of abridgment throughout their pages. The student of Rutherford's letters and his other works will recognize in them a full transcript of what he must have said.

Dr. Bonar has kindly read my transcription, sheet by sheet, as it was made, and he has again read the proofs with me. Our common aim has been to reproduce the sermons in a form that will not in any way do discredit to their author, Samuel Rutherford.

V The Spouse's Longing for Christ.—SONG OF SOLOMON 5:3–6

VI The Church Seeking her Lord.—SONG OF SOLOMON 5:7–10