Discourses on the Lord's Supper (eBook) 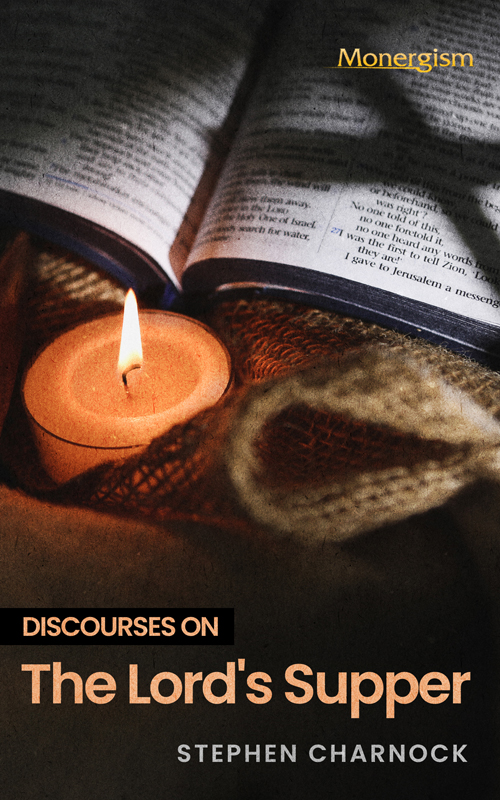 THE Corinthians were a church planted by Paul, watered by a long preaching among them; but notwithstanding all his pains, he receives news of some corruptions crept in and overspreading that church. Some that minded the welfare of the Corinthian church, had stirred it up to write to Paul for the decision of several cases, which were controverted among them. In this chapter the fifth case comes to be handled, about the ordering their public assemblies.

(1.) Concerning the carriage of men and women in the church. (2.) The celebration of the Lord's Supper. (3.) The use and exercise of spiritual gifts, chap. 12. In ver. 17, the apostle makes a transition from the first to the second, and taxeth them with their divisions, which were the ground of their other miscarriages.

Observe, Divisions in a church are usually attended with sad consequences. They despoil the church of its beauty and ornaments, and many times are an occasion of sullying the beauty of divine institutions; they here hindered a communion one with another. All communion is founded upon union. Divisions shook that, and brought in gross miscarriages about the Lord's Supper; a disorderly meeting, one taking before another, and making the Lord's Supper a scrambling feast; discovering more passion one against another than a mindfulness of the sufferings of Christ; and their unworthy receivings provoked God to send among them deadly diseases, ver. 30. For the reformation of those abuses, the apostle reduceth them to the consideration of the first institution.

Observe, In all reformations, we are not so much to mind what this or that custom of the church is, when there is a clear word to walk by. Christ overthrows polygamy by reducing the number of persons married to the first institution: Mat. 19:4, 9, 'God created male and female.' This miscarriage was chiefly in their ἀγάπαι, or banquets which they had before the supper, which were set up in imitation of Christ, who kept his last supper with his disciples, at the end whereof he instituted this sacrament. Now, in the eating of this, the rich brought their dainties, and ate to gluttony and excess, before the poor were met together, and left the scraps for the meaner sort, and thereby did shame them, ver. 22; i.e. did upbraid them with their poverty. Whence observe,

1. The community of goods, or a voluntary levelling, was not a standing institution in Paul's time; among the Corinthians you find it not in use. There were rich, and there were poor; distinctions among men; men were proprietors of their own goods.

2. How soon will corruptions creep into the best church! This mighty corruption, an epicurean carriage, crept into this knowing and well-gifted church betimes, while the great apostle was living, who had the conduct of them, and of all the churches of the Gentiles. The devil will sow his tares where God sows his wheat. As he opposed Christ at the very entrance into his office, to make his mediation insignificant, so he will endeavour to corrupt a church at the first entrance of the gospel, to make it altogether fruitless.

3. Human ceremonies are not to be urged, especially when they by abuse degenerate into superstition, carnality, and profaneness.* The apostle, when he explains what he had 'received from the Lord,' and 'delivered to' the Corinthians, makes no mention of a divine institution of those ἀγάπαι, love-feasts, which they used in those days, in imitation of the supper which preceded the first institution of this ordinance. He speaks nothing in the defence of this custom, nor urgeth it upon them, but only presseth the institution. Divine institutions, because of God's sanction, are not to be laid aside, though abuses creep in. What is man's must be discarded, what is God's must be preserved. Tares ought to be separated from the wheat. This human ceremony might claim precedency of all others that wanted the stamp of divine authority, and that by reason of its seniority, more ancient than all those of a later date in the church; yet it being but human in its original, is laid aside, and not practised (that I know of) in any church in the world. Paul proves here the divine institution, not any superaddition by the prudence of man.

A DISCOURSE OF THE END OF THE LORD'S SUPPER

A DISCOURSE OF THE SUBJECTS OF THE LORD'S SUPPER

A DISCOURSE OF THE UNWORTHY RECEIVING OF THE LORD'S SUPPER