Discerning the Beauty, the Excellence and Glory of Immanuel 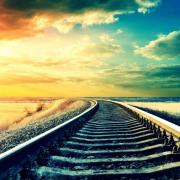 No man begins the journey to the heavenly home, until by the gracious influence of the Holy Spirit, his soul is attracted to Christ, the Living Way, the Truth, and the Life.

At that happy hour when the heart is opened, and the understanding enlightened to discern spiritual things, the Savior's love is the first to beam in mild, sweet, constraining influence upon the soul of the renewed man.

He wonders that he was not able before to discern the beauty, the excellence and glory of Immanuel. Now, Jesus appears to him as the chief among ten thousand, and altogether lovely. Now, he is ready to exclaim, "My beloved is mine, and I his. Whom have I in heaven but you? There is none upon earth that I desire besides you!"

Thus enlightened by divine grace, the pilgrim turns from the City of Destruction, to the Heavenly Mansions.

He leaves the crowded road which leads to eternal darkness and woe, and enters on the narrow pathway that conducts the weary traveler to realms of light and bliss.

His views are now elevated above the decaying objects around him. His affections are placed upon things above. He contemplates with rapturous delight the bleeding glories of Immanuel, and the shining abode of Zion's pilgrims in the celestial kingdom.

He has become a spiritually minded man.

He lives and walks by faith in the Son of God.

Though in the world, he is no longer of it; but belongs to the kingdom of Jesus Christ.

As an heir of glory, as a traveler to the skies, as an expectant of eternal bliss, he looks above and beyond the troublesome scenes of a fleeting pilgrimage.

He enjoys the charming and sublime prospect beyond the precincts of time! He beholds in that brighter world, an ocean of glory, without a shore, and without a storm!

As the Christian pursues his journey, with his eye fixed on the solemn realities of eternity, earth and sublunary grandeur appear to him as transitory as the morning cloud and early morning dew, compared with those immeasurable ages of bliss, which roll before his transported vision.

He who has been constrained, by the Savior's love, to begin the blessed journey from the wilderness of this world to the heavenly Canaan, will delight to meditate on the riches and glory of his Father's house, in the pure, unclouded realms of eternal day.

From The Devotional Works of David Harsha  - Wanderings of a Pilgrim