The Description, Rise, Growth, And Fall of Antichrist (eBook) 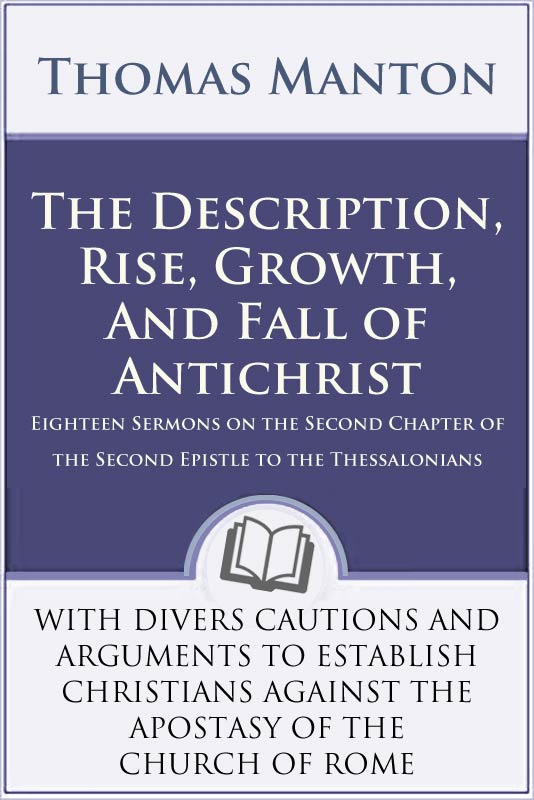 EIGHTEEN SERMONS on the SECOND CHAPTER OF THE SECOND EPISTLE TO THE THESSALONIANS, containing THE DESCRIPTION, RISE, GROWTH, AND FALL OF ANTICHRIST,
with DIVERS CAUTIONS AND ARGUMENTS TO ESTABLISH CHRISTIANS AGAINST THE APOSTASY OF THE CHURCH OF ROME

Dr Thomas Manton was not so unknown to London, nor is he so much forgotten, as that his name or writings should need any of my commendations. But booksellers expecting such an office, I have great reason to be willing to serve thee in serving the memorial of such a friend. What he was I need not tell even strangers, after the character truly given of him by his friend and mine in his funeral sermon. How sound in judgment against extremes in the controversies of these times, a great lamenter of the scandalous and dividing mistakes of some self-conceited men; how earnestly desirous of the healing of our present breaches, and not unacquainted with the proper means and terms, of which the author of his funeral sermon and I had more than ordinary experience; how hard and successful a student he was, and how frequent and laborious a preacher, and how highly and deservedly esteemed;—all this, and more, is commonly here known. The small distaste that some few had of him I took for part of his honour, who would not win reputation with any by flattering them in their mistakes or unwarrantable ways. He used not to serve God with that which cost him nothing, nor was of their mind who cannot expect or extol God's grace without denying those endeavours of man to which his necessary grace exciteth them. He knew that without Christ we could do nothing, and yet that by Christ's strengthening us we can do all things which God hath made necessary to be done by us. He was not of their mind that thought it derogatory to the honour of Christ to praise his works in the souls or lives of any of his servants, and that it is the honour of his grace that his justified ones are graceless; and that their Judge should dishonour his own righteousness if he make his disciples more righteous personally than scribes and pharisees, and will say to them, 'Well done, good and faithful servant; thou hast been faithful over a few things, enter thou into the joy of thy Lord.' He knew how to regard the righteousness and intercession of Christ, with pardon of sin and divine acceptance, instead of legal personal perfection, without denying either the necessity or assigned office of our faith, repentance, or evangelical sincerity in obeying him that redeemed and justifieth us. He knew the difference between a man's being justified from the charge of being liable to damnation as a Christless, impenitent unbeliever and ungodly, and being liable to damnation for mere sin as sin, against the law of innocency, which required of us no less than personal, perfect, perpetual obedience. He greatly lamented the wrong which the truth and church underwent from those that neither knew such differences, nor had humility enough to suspect their judgments, nor to forbear reviling those that had not as confused and unsound apprehensions and expressions as themselves.

But he hath finished his course, and is gone before us, and hath left here a dark, self-distracting world, and a church of such as Christ will perfect; but, alas! yet lamentably imperfect, as their errors, divisions, contentions, and scandals have these thirteen hundred years too publicly declared. Children of the light we are, while the world is in darkness; but, alas! yet how dim and clouded! With thousands it does not so much as convince them of their ignorance, nor maketh them humbly suspicious of an erring judgment; so that through the copulation of pride and ignorance, few cry out so loud of error as the erroneous, or of heresy as the heretical, or of schism as the schismatical; and false conceptions are so common among men, that I think with almost all mankind the number of false apprehensions in comparison of the true ones is far greater than unhumbled understandings will easily believe; and yet, while mankind doth swarm with error, those that least know their own cry down even the toleration of that which, alas! we cannot cure; and if a multitude of errors must not be tolerated, I know not the person that must be tolerated. And who then be they that shall be the avengers of other men's mistakes? Christ knew that none are so forward to reproach and so backward to bear with the motes in men's eyes as they that have beams in their own.

Among such, what sort of men on earth hath more cried down error, heresy, and schism, than the Papal tribe? AWAY WITH THEM, EXTERMINATE THEM, BURN THEM, hath long been their cry, their laws and practice, little thinking how they are polluted with error, heresy, and schism themselves. The revived attempts of this consuming fiery spirit hath made those that dispose of Dr Manton's papers take these against Popery as now most seasonable; and their plainness, suited to common capacities, may make them to many more useful than more argumentative disputations. They that would have such may see errors that are unanswerable (I should say unrefutable, for I find that men, and women too, can answer anything). I confess myself not thoroughly studied in these prophetical parts of the scriptures, and therefore none of the fittest to commend such writings, any further than they commend themselves. But I am hasting after this my dear departed brother to the world of light, where all divine mysteries are unveiled, and life, and light, and love are perfected; for which, even at the door, I am, though weak, a believing and desiring expectant.