Death Disarmed of Its Sting (eBook) 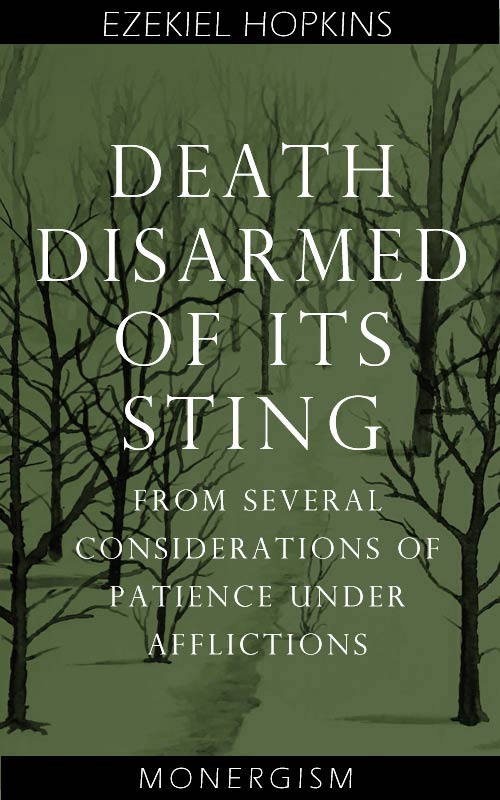 BUT LET PATIENCE HAVE HER PERFECT WORK, THAT YE MAY BE PERFECT AND ENTIRE, WANTING NOTHING. - JAMES 1:4

IF we consider the state and condition of those Jews, to whom the Apostle directs this Epistle, we shall find, that, as they were a dispersed, so they were an afflicted and persecuted people. There was always a most implacable hatred, in other nations, against the Jews; accounting them the most base, perverse, and infamous people under heaven. And, doubtless, though the whole body of them, which lived in Judea, were well enough secured from their affronts and injuries; yet, such parcels of them as were scattered into other countries sadly felt the effects of this natural aversion and antipathy. Yea, so low and despicable was their condition, that their own brethren, in scorn and contempt, call them the dispersed among the Gentles: John 7:35. Their ancient religion, which they had received from Moses, was so odious to the Heathen, among whom they lived, that they accounted it the most ridiculous and sordid superstition that ever was invented: and, because they firmly adhered to a way of worship, which was so contradictory to that gross idolatry which had generally obtained in the world, they both derided them as credulous, and hated them as stubborn and inflexible. There is no hatred so bitter and irreconcileable, as that, which ariseth from different religions: for, religion being avowedly the highest concern of mankind, those who differ in this cannot but mutually accuse one another of folly and madness: and this begets mutual contempt, and ends in malice and violence; whilst each seeks to take the part of his God, and to vindicate his own wisdom in choosing him, against those, who must needs he concluded to despise, because they do not worship him. And, therefore, as these scattered Jews were hated and persecuted upon the account of their own native religion, so much more, when divers of them were converted to the faith of Christ; because they then took up and professed a religion, more contrary to the Gentile impiety, than Judaism itself was. Yea, they were not only hated by the Gentiles, but by their own countrymen, the unbelieving Jews; who took all occasions to stir up the people against them, and to expose them, as the maintainers of a pestilent sect, to the fury of the enraged multitude: and we read frequently, in the Acts, what tumults, and uproars, and persecutions, were raised against them by this means.

1. Of Patience Under Afflictions: a Discourse on James 1:4

2. Of the Consideration of our Future State, as the remedy against Afflictions: a Discourse on 2 Cor. 4:18