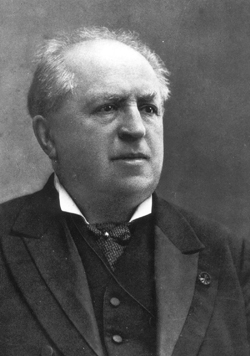 If we think that the earthly pathway of God’s children is for the most part pleasant and easy, with only an occasional cross, we are mistaken. The child of God who is new upon the way, and weathers his first storm, may think: This will soon be over and then the breezes will blow gently again. But as we go on, we learn by many a disappointment, as well as from the Word of the Lord, that such is not our lot. When one wave of the sea breaks, another follows close behind. So troubles continually roll over the heads of God’s children. The cross must be carried daily.

“All who would live a godly life shall suffer persecution.” And “without much tribulation ye shall not enter into the Kingdom of God.” Never can we escape the cross. And the proof of the genuineness of our endurance is just this, that we take up our cross daily, taking such burdens as God lays upon us, and bear the cross upon the way where He leads.

Only the child of God, he who is saved by the blood of the Son of God, is a cross bearer. For only such suffering may be counted cross-bearing which is borne for love of God, in the strength of Christ, and for His Name’s sake. None other deserves that title.

The Christian’s sorrows and burdens are not always obvious. The cross is not always one which the world can see. Indeed not. Bitterest of all the agonies which wring the human heart are often those that only God knows.

What, then, composes the cross?

It may be a weakness of the body; it may be a thorn in the flesh. It may also be the scorn you bear because of the church of God. It may be the miscarriage of plans you thought were very good, and the frustration of your highest hopes. Assuredly, it also includes the sins which beset you from without, from fellow-men. And, worst of all, the sins which dwell within your own heart, which pain you and trouble you.

For we must remember that, if the sins of others try our patience, the sins within our own hearts are even harder to bear. Yet we are called to endurance also in regard to them. Do not misunderstand — this does not and never can mean that you must let your sin have its way. Endurance is a holding fast to faith, whatever may come. And our own sins are a part of that “whatever.” Over against one’s sin endurance means that, though I prick and burn my fingers on it, I shall not let it shake my faith.

And that is the heaviest and bitterest burden.

For we are so prone to become impatient with that dreadful weed within the heart. How firmly we have resolved to root it out! We’ve tugged at it, passionately determined to cast it into the depths of hell. But in vain. It’s still there. It pricks us again and its poison gets under our skin once more. We have prayed, so often and so fervently, that God would take it away. But He does not! And we cry, “Why not?” Then we become impatient. In our impatience we tug at the weed again, only to tear our hands on its thorns once more. And our steadfastness wavers.

We ought not to deal with it thus.

God’s blessing does not rest upon such striving against the sins of the flesh.

When we were reborn of the Spirit, God saw fit to leave that thorny weed in our hearts. We cannot understand why. We cannot fathom the wisdom of God. But we must acknowledge it. And therefore we may not lose patience with this which He has deemed best for us. We are to endure it. And thus it will serve to drive us to Him the more often, that we may learn from Him how to avoid the thorns and the poison.

That weed will be there until you are called to glory. Then you shall lay down your earthly tabernacle, and with it at last be rid of all the thorns of sin.

But meanwhile God does not intend that it shall hurt you. On the contrary, it should bring you to a state of quietness before Him. You will learn to be careful lest you hurt yourself on the thorns, and you thus will learn to temper your impatience and curb your unhallowed restlessness. That weed will drive you to God, where you must learn patience, where you will find the calmness of endurance.

So the cross is multiform.

And for the bearing of this multiform cross there is abundant strength, even strength to triumph.

Flesh and blood protest against cross bearing and resent it. Human sinful nature cannot willingly bear such burdens. It is only by the gracious operation of the Holy Spirit that the Christian learns to take up his cross with eagerness, and at last even to glory in it.

But if you should take the attitude: I must be strong to bear this my cross; it will require all the effort I can muster: I shall exert myself and gradually develop the strength to endure — then, do believe it, then you are in a bad way. For then one of two results will ensue. Either the Lord will cause your self-dependent efforts to fail (which is by far preferable), or He will permit you to develop a sickly strength of your own by means of your own miserable efforts; and that will prove to be poison to your soul.

No, it must not be thus. I must not only admit, but also fully realize, that to bear the cross steadfastly day after day, to bear it when it tears my flesh and heart, to bear it as Jesus would have me bear it, is beyond my strength and endurance. Lord, thy servant cannot! Who among those born in sin is able to perform so gigantic a task?

If this is your sincere confession, if your inner heart thus truly feels its helplessness, then through prayer your “I cannot!” becomes “I can!” For he who feels utterly helpless seeks shelter in the Almighty. And never has anyone sought comfort with Jesus but that he was also given strength to endure.

Then you will not understand your own willingness to bear a cross against which your very nature protests. Your own flesh whispers, “Cast it off!” Friends around you say, “You cannot bear it!” Satan taunts, “You’ll have to give it up!” But you hold your head high and you do not cast it off.

Even though you may be nailed to the cross and men cry out, “If you are free in Christ, come down!” you remain steadfast. You endure unto death, unto the grave; not in your own strength but in the strength of your Lord.

This then is your endurance, that through all trials and temptations you keep the faith; you are upheld by faith; when the way is difficult and wearisome, you are found walking in the path of God’s will by faith.

If your wrestling is sincere, if cross-bearing is to you a serious matter, then Satan will place many a stumbling block in your way and bring about many a fall. That is to be expected. But no matter how often we fall, or how long the evil one may hold us dwn, we do again wrestle free and regain our feet. Though weary and well-nigh exhausted, we do not give up until the enemy slinks away in defeat once more.

Endurance does not imply that you never for a moment lose faith. It does imply that every struggle ends with the outcry, “More than conquerors through Jesus Christ who giveth me strength!”

Patience, then, is not submission but the exercise of strength. It is not indifference to, but keen awareness of suffering. It is the strength whereby we never let go but ever hold fast to that which was given us by God’s grace. Patience is that virtue granted God’s children, whereby Christ enables us to endure the cross, while we look for His coming again.

From The Practice of Godliness by Abraham Kuyper