The Covenant of Life Opened (eBook) 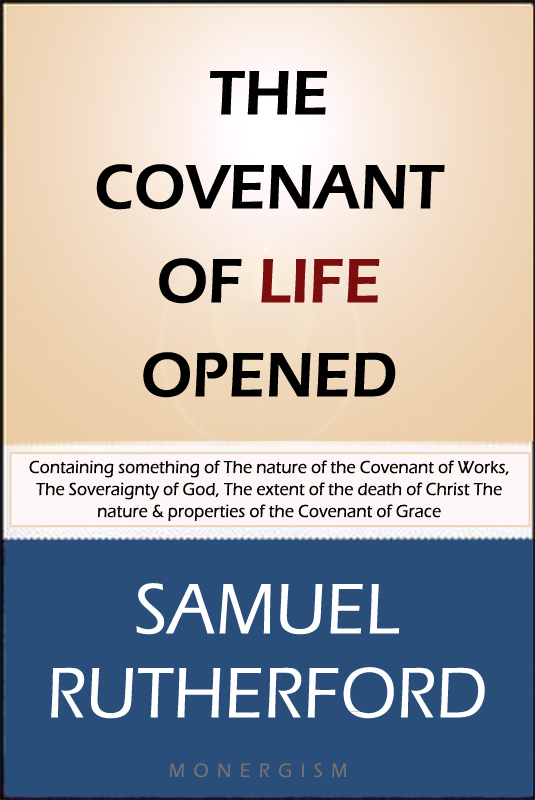 The Apostle, 1 Cor. 15:47. The first man is of the earth, earthie, the second man is the Lord from Heaven, speaking of the two eminently publick persons, the noble heads of great Families; makes the condition of the first Adam to be animal and earthly, & that of the second Adam to be spiritual and Heavenly. And without doubt, to be born of the house and seed of the second Adam, John 1:12, 13. must darken the glory of the first birth, so as there is no great ground to boast of the skin and empty lustre of Nobility and good blood; Although when the creature called (I) and (self) do creep in to lodge in a poor feeble piece of clay, that clay so lustred must be some God.

[2] The flower and choisest of Adam his Paradise-state, is an earthly condition, as is evidenced by his eating, Gen. 2:9, 16. sleeping, 21, his being placed in a Garden, to dresse it, 8, 16, 17, his marriage, 23, 24. his Lordship over birds, beasts, fishes, Gen. 1:28. But in the second Adam, besides all these, we are gifted with a life of more worth then many acres of Vineyards. They declare therefore that there is much of the first Adam in them, little of the second; Who would conquesse again the many lands, that our first father Adam sold, and joyn house to house, and lay field to field, till there be no place, and disinherit all others, as if they were bastard heirs, and themselves the only righteous heirs of Adam, that they may be placed alone in the midst of the earth, Isa. 5:8. And the more spiritual any be, the more are they above the nothing world.

[3] Mortality may be called supernaturall to the earthie part of Adam, since it is not naturally due to a body of earth, to claim life for ever. Though immortality be due to whole Adam consisting of soul and body and endued with the image of God. For the soul cannot die.

[4] But if we speak of such a life, to wit, of a heavenly communion with God as Adam was a comprehensor, or one who is supposed now to have runne well, and won the Gold, and the Crown, such a life was due to Adam, not by nature, but by promise.

[5] Adam in his first state was not predestinate to a law glory, and to influences of God to carry him on to persevere: Nor could he blesse God, that he was chosen before the foundation of the world to be Law-holy, as Eph. 1:3. What? Was not then Adam predestinated to life eternall, through Jesus Christ? He was: But not as a publick person representing all his sons, but as another single person, as Abraham, or Jacob: for Gospel predestination is not of the nature, but of this or that person: Therefore were we not predestinat to life eternall in him, but in Christ, Rom. 8:29, 30.

[6] Therefore Adam fell from the state of Law-life both totally and finally, but not from the state of Gospel election to glory. For the Lord had in the Law-dispensation a love designe, to set up a Theatre and stage of free grace. And that the way of works should be a time-dispensation, like a summer-house to be demolished again: As if the Lord had an aime that works and nature should be a transient, but no standing Court for righteousnesse: Hence it is now the reliques of an old standing Court, and the Law, is a day of assyse, for condemning of malefactors, who will acknowledge no Tribunall of grace, but only of works: And it is a just Court to terrifie robbers, to awe borderers and loose men, but to beleevers it is now a Court for a far other end. 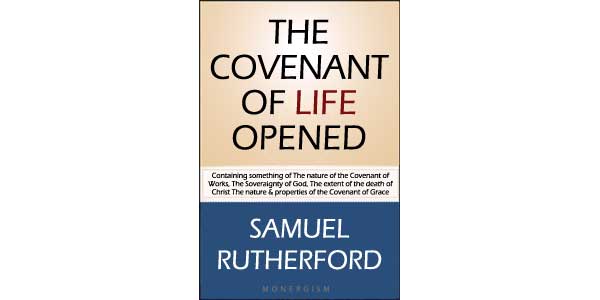 CHAPTER. I: What is to be spoken of the COVENANT of LIFE, shall be reduced to these Heads.

CHAPTER. IV: The Elect non-converted are not under Law-wrath.

CHAPTER. V: God intended a Law-dispensation but for a time.

CHAPTER. VI: It was condescension in the Lord to enter in Covenant with man.

CHAPTER. VII: Its not written in the heart of man by nature, that GOD should promise life eternall to man, upon condition of obedience.

CHAPTER. VIII: What place death hath in the Covenant.

CHAP. IX: What life is promised in the Covenant of Works

CHAPTER. X: The Arminians ground that God was in a maner compelled to appoint the New Covenant.

CHAPTER. XII: Self-searching to know under what Covenant We are, a spirituall condition, and why?

CHAPTER. XV: Other considerable differences between externall and internall Covenanting.

CHAPTER. XVII: Of the hypocrisie, of formall Covenanters.

CHAPTER. XVIII: The nature, characters, properties of the new heart and the new spirit of Covenanters

CHAPTER. XIX: The place of Evangelick works in the New Covenant

CHAPTER. XX: Whether or not suffered Christ for any sin against the Gospel only

CHAPTER XXI: Whether the Lord Mediator as Mediator command the same good Works in the Covenant of Grace which are commanded in the Covenāt of Works.

CHAPTER. XXII: No promise of perseverance to Adam

CHAPTER. XXIII: The Law of Works required not simplie doing, but doing to the end

CHAPTER. XXIV: Whether faith as true, or faith as continuing to the end, be the condition of the Covenant of Grace

CHAPTER. XXV: Whether is Christs Righteousnesse imputed and made ours

CHAPTER. XXVI: Of the perpetuity of the Covenant of Grace

CHAPTER. XXVIII: Christ died not to blot out all sense of sin, but rather to quicken a godly sense thereof

The Covenant of Life Opened II

CHAPTER. I: Christs roome in both Covenants.

CHAPTER. II: Wherein stands our right to Christ, and the satisfaction made for us by Christ?

CHAPTER. III: How Christ suffered for us in our room and place

CHAPTER. IV: How we are in Christ dying, and crucified in him.

CHAPTER. V: The Covenant of Suretyship or of Redemption between God and the Mediator Christ

CHAPTER. VI: That there is a Covenant of Suretyship between JEHOVAH and the Son

CHAPTER. VII: The Covenant of Redemption is explained in three eternal acts

CHAPTER. IX: The 13. Argument from the necessity of Gods call.

CHAPTER. X: Christ procures the Gospel to be Preached to Reprobates, but undertakes not for them.

CHAPTER. XI: Of the promises made to Christ in the Covenant of Mediation

CHAP. XII: The condition and properties of the Covenant of Redemption