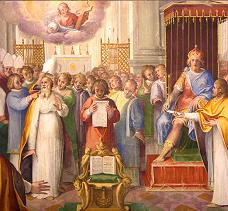 The Council of Chalcedon, the fourth ecumenical council of the church, was summoned by the Eastern Emperor Marcion. It was convoked specifically to establish ecclesiastical unity in the East, and its definitive formulation, the Chalcedonian Creed or Definition, became and remains the measure of orthodoxy for Christological statements concerning the two natures of Christ.

The work of Chalcedon can be understood only in the light of a series of Christological declarations beginning with the Council of Nicaea (325). The Nicene Creed declared that Christ is of the same divine substance with the Father, against Arius, who taught that Christ had a beginning and was only of similar substance. The Council of Constantinople (381) both ratified and refined the Nicene Creed, in opposition to continuing Arianism, and declared against Apollinarianism, which stated that Christ's human soul had been replaced by the divine Logos. Moreover, Constantinople declared that the Holy Spirit proceeds from the Father and the Son.

In the post-Constantinople period the heresies were Nestorianism and Eutychianism. The former posited a dual personality in Christ, whereas the latter, reacting to Nestorianism, declared that the incarnate Christ had only one nature. Nestorianism was defeated at the Council of Ephesus in 431, but Eutychianism was upheld by the so-called Robber Council held in Alexandria in 449. This set the stage for the Council of Chalcedon two years later.

Marcion ascended the imperial throne in 450 and immediately sought to bring about church unity, which was imperiled by dissension concerning the two natures of Christ. Pope Leo I wished a general council to be held in Italy, but settled for Chalcedon in Asia Minor as nearer the capital.

The Council of Chalcedon met in October, 451, with more than five hundred bishops and several papal legates in attendance. There existed a general consensus among the bishops simply to ratify the Nicene tradition interpreted by Constantinople along with the letters of Cyril of Alexandria to Nestorius and John of Antioch and Pope Leo's letter to Flavian (the so-called Tome, or Epistola Dogmatica). Had majority opinion prevailed there would have existed no need for further defining the faith. Nevertheless, the imperial commissioners deemed it necessary, in the interest of unity, to define the faith as it related to the person of Christ.

The council proceeded in three steps to its work of unification. First, it reaffirmed the Nicene tradition; second, it accepted as orthodox the letters of Cyril and Leo; and third, it provided a definition of the faith.

There existed two overarching concerns, maintenance of the unity of Christ's person and establishment of the two natures of Christ. Use was made of letters of both Cyril and Leo along with a letter of Flavian. The first draft of the definition, which is not extant, was deemed deficient in not clearly allowing for two natures. With much effort the council passed a definition which both negated the one-nature incarnational theory of Eutyches and affirmed the two-nature declaration as orthodox. Mary was declared to be the "God-bearer" (Theotokos) of God the Son, who at the incarnation became "truly man." Thus Christ was declared as to his deity "consubstantial with the Father," and as to his humanity "consubstantial with us in manhood."

Thus the Chalcedonian Creed safeguarded both the divine and human natures of Christ existing in one person in unchangeable union. Since salvation was uppermost in the minds of the framers of this definitive creed, they knew that only a Christ who was truly God and man could save men.

Although the Chalcedonian Creed became, and continues to be, the standard for Christological orthodoxy, it did not prevent continuing opposition from those seeking to coalesce the two natures into one, such as the monophysite and monothelite heresies in the succeeding two centuries.