The Common Principles of the Christian Religion (eBook) 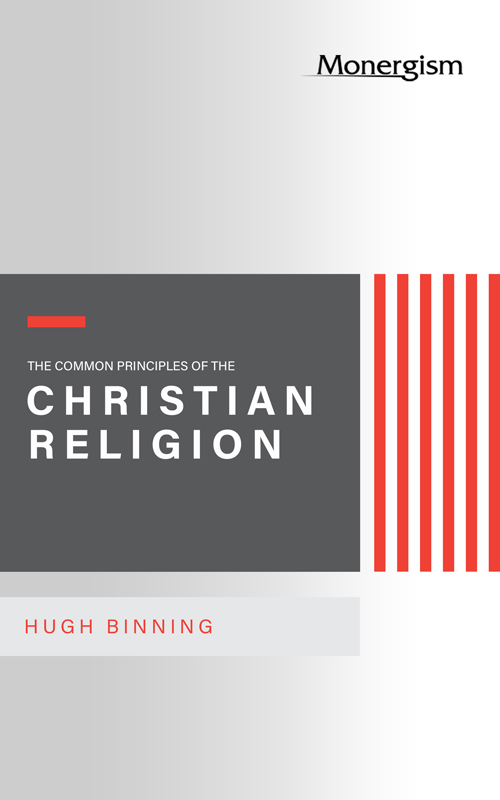 CHRISTIAN READER,—The holy and learned author of this little book, having outrun his years, hastened to a maturity before the ordinary season, insomuch that ripe summer-fruit was found with him by the first of the spring: for before he had lived twenty-five years complete, he had got to be Philologus, Philosophus, Theologus eximius; whereof he gave suitable proofs, by his labours, having first professed in philosophy three years, with high approbation, in the university of Glasgow, and thence was translated to the ministry of the gospel in a congregation adjacent, where he laboured in the work of the gospel near four years, leaving an epistle of commendation upon the hearts of his hearers. But as few burning and shining lights have been of long continuance here, so he ('after he had served his own generation by the will of God,' and many had rejoiced in his light for a season) was quickly transported to the land of promise, in the 26th year of his age. He lived deservedly esteemed and beloved, and died much lamented by all discerning Christians who knew him. And, indeed, the loss which the churches of Christ, in these parts, sustained in his death, was the greater upon a double account: first, that he was a person fitted with dexterity to vindicate school-divinity and practical theology from the superfluity of vain and fruitless perplexing questions wherewith latter times have corrupted both; and had it upon his spirit, in all his way, to reduce that native gospel simplicity, which, in most parts of the world where literature is in esteem, and where the gospel is preached, is almost exiled from the school and from the pulpit,—a specimen whereof the judicious reader may find in this little treatise. Besides, he was a person of eminent moderation and sobriety of spirit, (a rare grace in this generation,) whose heart was much drawn forth in the study of healing-ways and condescensions of love among brethren; one who longed for the recovering of the humanity of Christianity, which hath been well near lost in the bitter divisions of these times, and the animosities which have followed thereupon.

That which gave the rise to the publishing of this part of his manuscripts, was partly the longing of many who knew him after some fruit of his labours for the use of the church; and partly the exceeding great usefulness of the treatise, wherein, I am bold to say, that some fundamentals of the Christian religion, and great mysteries of faith, are handled with the greatest gospel-simplicity and most dexterous plainness; and are brought down to the meanest capacity and vulgar understanding, with abundant evidence of a great height and reach of useful knowledge in the author; who, had he lived to have perfected the explication of the grounds of religion in this manner—as he intended, in his opening the catechism unto his particular congregation—he had been, upon this single account, famous in the churches of Christ. But now, by this imperfect opus posthumum, thou art left to judge ex ungue leonem.

The author's method was his peculiar gift, who, being no stranger to the rules of art, knew well how to make his method subserve the matter which he handled; for, though he tell not always that his discourse hath so many parts, thou mayest not think it wants method, it being maximam artis celare artem. That the same Spirit which enabled him to conceive, and communicate to others, these sweet mysteries of salvation, may help thee with profit to read and peruse them, is the desire of him who is,

Thine in the service of the Gospel,

LECTURE I. - GOD'S GLORY THE CHIEF END OF MAN'S BEING.

LECTURE II. - UNION AND COMMUNION WITH GOD THE END AND DESIGN OF THE GOSPEL.

LECTURE III. - THE AUTHORITY AND UTILITY OF THE SCRIPTURES.

LECTURE V. - OF THE SCRIPTURES.

LECTURE VI. - WHAT THE SCRIPTURES PRINCIPALLY TEACH: THE RUIN AND RECOVERY OF MAN: FAITH AND LOVE TOWARDS CHRIST.

LECTURE VII. - OF THE NAME OF GOD.

LECTURE VIII. - THE ETERNITY AND UNCHANGEABLENESS OF GOD.

LECTURE XII. - THE UNITY OF THE DIVINE ESSENCE, AND THE TRINITY OF PERSONS.

LECTURE XIII. - OF THE UNITY OF THE GODHEAD AND THE TRINITY OF PERSONS.

LECTURE XIV. - OF THE DECREES OF GOD.

LECTURE XIX. - OF THE CREATION OF MAN.

LECTURE XXI. - OF THE FIRST COVENANT MADE WITH MAN.

LECTURE XXII. - OF THE FIRST COVENANT.

LECTURE XXIII. - OF THE STATE WHEREIN MAN WAS CREATED, AND HOW THE IMAGE OF GOD IS DEFACED.

LECTURE XXIV. - OF SIN BY IMPUTATION AND PROPAGATION.

LECTURE XXV. - OF THE WAY OF MAN'S DELIVERY.