Come and Welcome to Jesus Christ 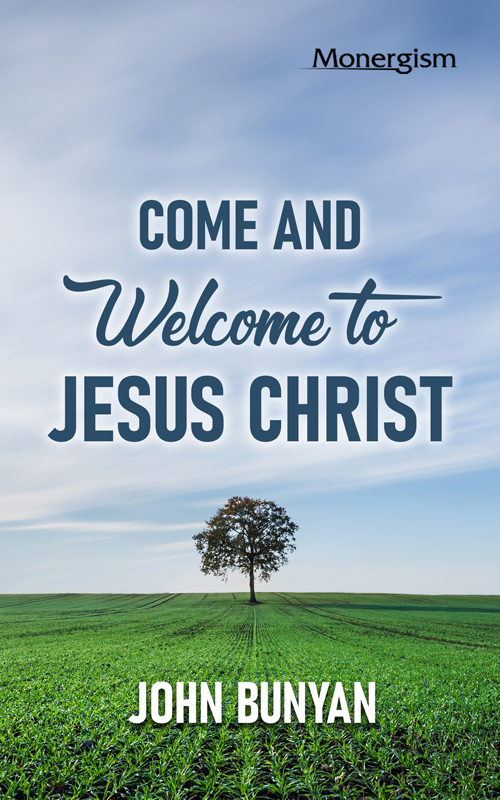 A Plain and Profitable Discourse on John 6:37. Showing the cause, truth, and manner of the coming of a sinner to Jesus Christ; with his happy reception and blessed entertainment.

Written by John Bunyan, author of “The Pilgrim’s Progress”

“All that the Father giveth me shall come to me; and him that cometh to me I will in no wise cast out” - John 6:37

A little before, in this chapter, you may read that the Lord Jesus walked on the sea to go to Capernaum, having sent his disciples before in a ship, but the wind was contrary; by which means the ship was hindered in her passage. Now, about the fourth watch of the night, Jesus came walking upon the sea, and overtook them; at the sight of whom they were afraid.

Note, When providences are black and terrible to God’s people, the Lord Jesus shows himself to them in wonderful manner; the which sometimes they can as little bear, as they can the things that were before terrible to them. They were afraid of the wind and the water; they were also afraid of their Lord and Saviour, when he appeared to them in that state.

Note, That the end of the appearing of the Lord Jesus unto his people, though the manner of his appearing be never so terrible, is to allay their fears and perplexities.

Then they received him into the ship, and immediately the ship was at land whither it went.

Note, When Christ is absent from his people, they go on but slowly, and with great difficulty; but when he joineth himself unto them, oh! how fast they steer their course! how soon are they at their journey’s end!

The people now among whom he last preached, when they saw that both Jesus was gone and his disciples, they also took shipping, and came to Capernaum, seeking for Jesus. And when they had found him, they wonderingly asked him, “Rabbi, when camest thou hither?” but the Lord Jesus, slighting their compliment, answered, “Verily, verily, ye seek me, not because ye saw the miracles, but because ye did eat of the loaves, and were filled.”

Note, A people may follow Christ far for base ends, as these went after him beyond sea for loaves. A man’s belly will carry him a great way in religion; yea, a man’s belly will make him venture far for Christ.

Note again, They are not feigning compliments, but gracious intentions, that crown the work in the eye of Christ; or thus, it is not the toil and business of professors, but their love to him, that makes him approve of them.

Note again, When men shall look for friendly entertainment at Christ’s hand, if their hearts be rotten, even then will they meet with a check and rebuke. “Ye seek me, not because ye saw the miracles, but because ye did eat of the loaves, and were filled.”

Yet observe again, He doth not refuse to give, even to these, good counsel: he bids them labour for the meat that endureth to eternal life. Oh! how willingly would Jesus Christ have even those professors that come to him with pretences only, come to him sincerely, that they may be saved.

The text, you will find, is, after much more discourse with and about this people, and it is uttered by the Lord Jesus as the conclusion of the whole, and intimateth that, since they were professors in pretence only, and therefore such as his soul could not delight in, as such, that he would content himself with a remnant that his Father had bestowed upon him. As who should say, I am not like to be honoured in your salvation; but the Father hath bestowed upon me a people, and they shall come to me in truth, and in them will I be satisfied. The text, therefore, may be called Christ’s repose; in the fulfilling whereof he resteth himself content, after much labour and many sermons spent, as it were, in vain. As he saith by the prophet, “I have laboured in vain, I have spent my strength for nought, and in vain” (Isa 49:4).

But as there he saith, “My judgment is with the LORD, and my work with my God;” so in the text he saith, “All that the Father giveth me shall come to me; and him that cometh to me I will in no wise cast out.” By these words, therefore, the Lord Jesus comforteth himself under the consideration of the dissimulation of some of his followers. He also thus betook himself to rest under the consideration of the little effect that his ministry had in Capernaum, Chorazin, and Bethsaida: “I thank thee, O Father,” said he, “Lord of heaven and earth, because thou has hid these things from the wise and prudent, and hast revealed them unto babes; even so, Father, for so it seemed good in thy sight” (Matt 11:25; Luke 10:21).

The text, in the general, standeth of TWO PARTS, and hath special respect to the Father and the Son; as also to their joint management of the salvation of the people: “All that the Father giveth me shall come to me; and him that cometh to me I will in no wise cast out.” The first part of the text, as is evident, respecteth the Father and his gift; the other part the Son and his reception of that gift.

These things might be spoken to at large, as they are in this method presented to view: but I shall choose to speak to the words, FIRST, BY WAY OF EXPLICATION. SECOND, BY WAY OF OBSERVATION.

Advertisement By The Editor

First, The Text Treated By Way Of Explication

-- The Extent Of The Gift

-- The Person Giving, The Father

-- The Father's Intent In Giving

-- The Son's Reception Of The Gift

-- What It Is To Come To Christ

-- The Promise To Those Coming To Christ

-- The Power Of Christ To Save, Or To Cast Out

Second, The Text Treated By Way Of Observation

-- Coming To Christ Not By The Power Of Man, But By The Drawing Of The Father

-- Comers Ofttimes Afraid That Christ Will Not Receive Them