A Collection of the Promises of the Gospel (eBook) 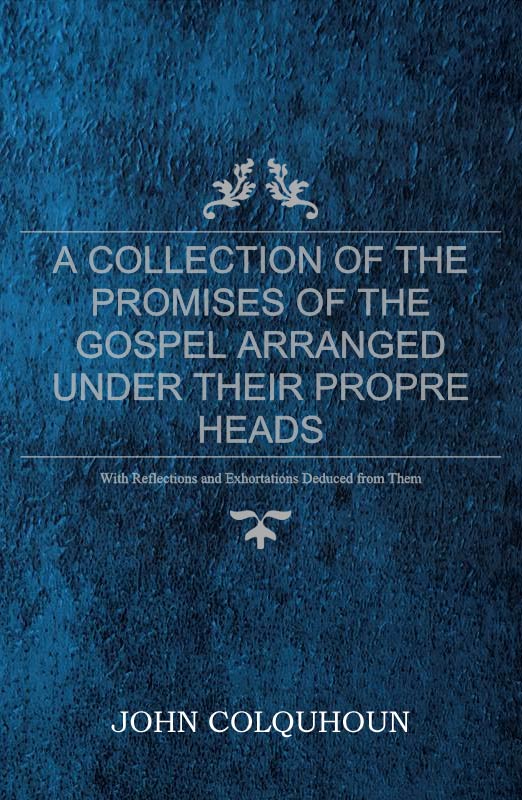 © 2020 All rights reserved. No part of this e-book may be reproduced or modified in any form, including photocopying, recording, or by any information storage and retrieval system, without permission in writing from the publisher. Mary Knoblock: [email protected]

As the absolute Promises of the covenant of grace which comprehend all its other promises, are directed in the offers of the gospel, to sinners of mankind indefinitely, in order that any convinced sinner, trusting cordially in Jesus Christ for all his salvation, may warrantably apply and trust them; and as the restricted Promises are, in the dispensation of the gospel, addressed only to true believers; the Author has endeavoured, under distinct chapters and sections, to distinguish the one sort from the other. Although he has done this as exactly as he could; yet he doubts not, that the intelligent and judicious reader may detect inaccuracies in the distinction.

His design in framing this distinction, is, to teach those exercised Christians who are often disquieted with doubts of their union and communion with Christ, to discern, notwithstanding, their Divine and ample warrant for coming as sinners to Him, and for relying on the absolute promises, directed in offer to them as sinners of Adam's race, as if this were but their first acting of faith, or the beginning of their confidence; and to direct those who are assured of their personal interest in the Saviour, to embrace also and trust the restricted promises, as their security for all the blessings contained in them.

If the following Pages, under the illuminating influences of the Holy Spirit of Promise, shall prove useful but to one humble believer, the Author's labour will be more than remunerated.

CHAP. 1. ABSOLUTE PROMISES OF THE INCARNATION, OBEDIENCE, AND DEATH OF CHRIST, FOR THE REDEMPTION OF SINNERS. .....

CHAP. 2. ABSOLUTE PROMISES OF THE GLORIOUS EXALTATION, AND UNIVERSAL DOMINION OF CHRIST, . .

CHAP.3. ABSOLUTE PROMISES OF CHRIST'S COMING AT THE LAST DAY, TO JUDGE THE WORLD, . .

CHAP. 4. ABSOLUTE PROMISES OF SPIRITUAL BLESSINGS, IN THIS WORLD, .....

CHAP. 5, ABSOLUTE PROMISES OF THE CONVERSION AND RESTORATION OF THE JEWS, . . . .

CHAP. 6 ABSOLUTE PROMISES OF THE CONVERSION OF THE GENTILES, THROUGHOUT THE WORLD, . .

CHAP. 1. DEFINITE PROMISES OF SPIRITUAL BLESSINGS TO BELIEVERS, IN THIS LIFE,
.
Sect. 1. Of general Promises to Believers,
2. Of Pardon and Acceptance as Righteous in the sight of God,
3. Of Reconciliation to God,
4. Of Adoption,
5. Of Access to God, and of the Acceptance of their spiritual sacrifices,
6. Of Converting Grace,
7. Of Sanctifying Grace,
8. Of Saving Faith,
9. Of Evangelical Repentance,
10 Of Spiritual and Saving Knowledge,
11. Of Spiritual Wisdom,
12. Of Divine Guidance, ...
13. Of Grace to Mortify indwelling Sin,
14. Of Grace to Overcome Temptation,
15. Of Victory over the World,
16. Of Victory over the devil,
17. Of Spiritual Strength and Courage,
18. Of Spiritual Fruitfulness,
19. Of Increase of Grace,
20. Of Perseverance in Grace,
21. Of a continued Interest in God, as their God,
22. Of a continued Interest in God as their Portion,
23 Of his redeeming Love to them,
24. Of his gracious Presence with them,
25. Of his Mercy,
26. Of his tender Care,
27. Of his present Help,
28. That He will never Forsake them,
29. Of Life from Christ,
30. Of Redemption by Christ,
31. Of all Supplies of Grace from the fulness of Christ,
32. Of his Love to his Redeemed,
33. Of his unwearied Care of them,
34. Of his making Intercession for them,
35. Of his Comforting Presence with them,
36. Of the Influences of his Spirit,
37. Of the Spirit's Teaching,
38. Of his Sealing of Believers,
39. Of his Help in Prayer,
40. Of God's Hearing of Prayer,
41. Of Peace of Conscience,
42. Of Spiritual Comfort,
43. Of Joy in God as their own God,
44. Of the Means of Grace,
45. Of Ability for edifying Discourse,
46. Of a Blessing upon the Ordinances, .
47. Of Sanctified Affliction, . , .
48. Of Grace to the offspring of believers,
49. Of their being made Kings and Priests,
50. Of the Ministration of Angels to them,
51. Of their Union and Communion with the Church,
52. Of Support and Safety to them in dying,

CHAP.4. DEFINITE PROMISES BOTH OF TEMPORAL AND SPIRITUAL BLESSINGS,
TO THOSE WHO EVIDENCE THEIR UNION WITH CHRIST, BY YIELDING SINCERE OBEDIENCE TO ALL HIS COMMANDS.

Chapter 5. DEFINITE PROMISES OF BLESSINGS IN THE WORLD TO COME.

CHAP.6. DEFINITE PROMISES RESPECTING THE STATE OF THE CHURCH,

That God who is infinitely faithful, will Fulfil all his Promises, ......