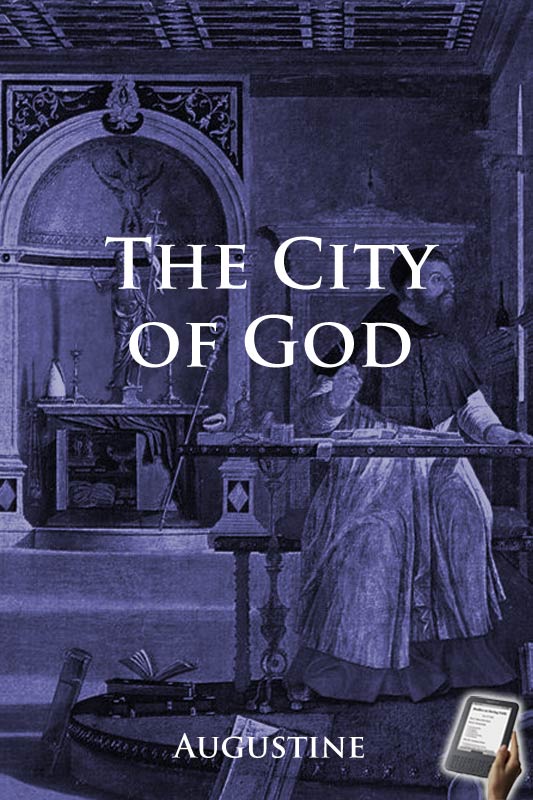 The “City of God” is the masterpiece of the greatest genius among the Latin Fathers, and the best known and most read of his works, except the “Confessions.” It embodies the results of thirteen years of intellectual labor and study (from A.D. 413–426). It is a vindication of Christianity against the attacks of the heathen in view of the sacking of the city of Rome by the barbarians, at a time when the old Græco-Roman civilization was approaching its downfall, and a new Christian civilization was beginning to rise on its ruins. It is the first attempt at a philosophy of history, under the aspect of two rival cities or communities,—the eternal city of God and the perishing city of the world.

BOOK I.
Augustine censures the pagans, who attributed the calamities of the world, and especially the sack of Rome by the Goths, to the Christian religion and its prohibition of the worship of the gods,


BOOK II.
A review of the calamities suffered by the Romans before the time of Christ, showing that their gods had plunged them into corruption and vice,


BOOK IV.
That empire was given to Rome not by the gods, but by the One True God,


BOOK V.
Of fate, freewill, and God's prescience, and of the source of the virtues of the ancient Romans,


BOOK VI.
Of Varro's threefold division of theology, and of the inability of the gods to contribute anything to the happiness of the future life,


BOOK VII.
Of the "select gods" of the civil theology, and that eternal life is not obtained by worshipping them,


BOOK VIII.[Pg vi]
Some account of the Socratic and Platonic philosophy, and a refutation of the doctrine of Apuleius that the demons should be worshipped as mediators between gods and men,

Of those who allege a distinction among demons, some being good and others evil,

BOOK XI.
Augustine passes to the second part of the work, in which the origin, progress, and destinies of the earthly and heavenly cities are discussed.—Speculations regarding the creation of the world,


BOOK XII.
Of the creation of angels and men, and of the origin of evil,


BOOK XIII.
That death is penal, and had its origin in Adam's sin,

BOOK XIV.
Of the punishment and results of man's first sin, and of the propagation of man without lust,


BOOK XV.
The progress of the earthly and heavenly cities traced by the sacred history,


BOOK XVI.
The history of the city of God from Noah to the time of the kings of Israel,


BOOK XVII.
The history of the city of God from the times of the prophets to Christ,


BOOK XVIII.
A parallel history of the earthly and heavenly cities from the time of Abraham to the end of the world,


BOOK XIX.
A review of the philosophical opinions regarding the Supreme Good, and a comparison of these opinions with the Christian belief regarding happiness,


BOOK XX.
Of the last judgment, and the declarations regarding it in the Old and New Testaments,


BOOK XXI.
Of the eternal punishment of the wicked in hell, and of the various objections urged against it,

BOOK XXII.
Of the eternal happiness of the saints, the resurrection of the body, and the miracles of the early Church,