The Church and its Polity (eBook) 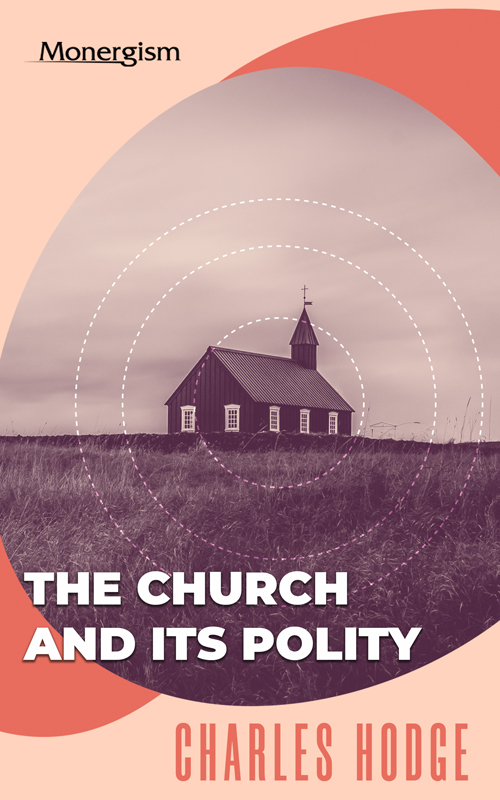 In 1835 my father began to write a series of annual articles, in review of the action of each successive General Assembly, in which he furnished a brief narrative of the proceedings, and discussed the doctrinal and ecclesiastical principles involved. He contributed each of the articles of this series which appeared in the Princeton Review from 1835 to 1868, with the exception probably of that of 1841. They, therefore, contain an exposition of his views of the fundamental principles underlying the constitution of the Church and its administration, and of the practical application of these principles to the various historical conditions experienced by the American Presbyterian Church during that long period

In 1845 he began to lecture to his classes in the Seminary on the topics embraced under the general head of Ecclesiology, and eventually lectured over the whole ground embraced in this department. At that time it was apparently his purpose to prepare for publication an exhaustive treatise on the subject, defending Presbyterian Church order in view of the present attitude of its Prelatic and Independent opponents. His manuscripts disclose the fact that these lectures were more than once rewritten, and articles substantially identical with several of them were published in the Princeton Review in successive years from 1846 to 1857. After the publicatoin of his Systematic Theology, he often expressed the desire that he might be permitted to complete that work by the addition of a fourth volume embracing the department of Ecclesiology; but he was prevented by the infirmities incident to his advanced age. And it is with reluctance that his representatives now relinquish the hope of publishing these papers in a connected form, from the conviction that they have no right to publish in his name that which his own judgment regarded as too imperfectly elaborated

In the meantime, the Rev. William Durant, of Albany, N. Y., an intelligent and enthusiastic pupil of my father, was struck with the vast amount of valuable discussion of Church principles and their practical applications, contained in these articles. He believed that if selections from these discussions were judiciously made and systematically grouped, a work of great value might be offered to the ministry, and to those intelligent laymen who are interested in the administration of ecclesiastical affairs. He consequently accomplished this work with the cordial approval of my father. After its completion, at the request of Mr. Durant, I subjected his work to a general review, and have now entire confidence in thus publicly testifying to my conviction that in the selection and arrangement of extracts, the reader of this work will have a fair, and, as far as the circumstances admit, an adequate exposition of my father's views, expressed in his own language, on all the subjects set forth in the table of contents. This table of contents itself discloses the wide range and the thorough analysis embraced in these discussions; and hence the very considerable contribution made in this volume to the elucidation of the subject set forth on its title page

CHAPTER I: IDEA OF THE CHURCH

CHAPTER II: THEORIES OF THE CHURCH

CHAPTER III: VISIBILITY OF THE CHURCH

CHAPTER IV: PERPETUITY OF THE CHURCH

CHAPTER VI: PROVINCE OF THE CHURCH

CHAPTER VII: RELATION OF THE CHURCH AND STATE

CHAPTER IX: THE CHURCH OF ENGLAND AND PRESBYTERIAN ORDERS

-- 1. The Session says who are Church Members
-- 2. Validity of Romish Baptism
-- 3. Infant Members Subjects of Discipline
-- 4. Terms of Communion
---- a. The Lord's Table for the Lord's People
---- b. Credible Evidence of Conversion alone required
---- c. Temperance Question
---- d. Marriage Question
-- 5. Dismission of Members to other Churches
-- 6. Withdrawal from the Communion

-- 1. Title of Bishop
-- 2. Who may vote in the Election of a Pastor
-- 3. Support of the Clergy
-- 4. Warrant and Theory of Ruling Eldership
-- 5. Rights of Ruling Elders
-- 6. Whether Ruling Elders may join in the Imposition of Hands when Ministers are ordained
-- 7. Significance of Laying-on of Hands
-- 8.—Installation not essential to Validity of Eldership
-- 9. Right of Elders to exhort and expound the Scriptures
-- 10.—Relative Powers of Elders and Deacons

-- 1. Quorum of Presbytery
-- 2. Ordination by less than three Ministers
-- 3. Presbytery judges the Qualifications of Members
-- 4. Length of Study before Ordination
-- 5. Ordination sine titulo
-- 6. Reordination
-- 7. Adoption of the Confession of Faith
---- a. In Reply to certain Strictures
---- b. In View of the Reunion
-- 8. Church Membership of Ministers
-- 9. Ministers without Pastoral Charge
-- 10. Demission of the Ministry
-- 11. Commissions of Presbyteries and Synods
-- 12. Supervision of vacant Churches

-- 1. Commissioners:
---- a. Assembly judges the Qualifications of its Members
---- b. Disputed Elections
---- c. Irregular Commissions
---- d. Case of an Elder who had ceased to act
---- e. Commissioners excluded pending Investigation
---- f. Reduction of Representation
-- 2. Manner of Conducting Business
-- 3. Power to act by Commission
-- 4. Decisions and Deliverances on Doctrines
---- a. General Remark
---- b. Testimony against Erroneous Publications
---- c. Church Commentary on the Bible
-- 5. Superintendence
---- a. Disposal of the Members of a dissolved Presbytery
---- b. Exclusion of the Synod of Western Reserve
---- c. Report on the Presbytery of Louisville
---- d. Power to remove Sentence
-- 6. General Agencies
---- a. Voluntary Societies and Church Boards
---- b. Warrant for the Boards
---- c. Relations of Boards to Presbyteries
---- d. Board of Education may condition Aid on Length of Study
---- e. Parochial Schools
-- 7. Correspondence with other Churches

-- 1. Revision of the Book
---- a. Need of Revision
---- b. Effective Methods for Revision
-- 2. Citation of Judicatories
-- 3. Appeals and Complaints:
---- a. Appeals in Cases not Judicial
---- b. Review of a Decision that Appeals cannot lie except in Judicial Cases
---- c. Legitimate Grounds of Complaint
---- d. In favor of a Commission to try Appeals and Complaints
-- 4. Decisions may confirm or reverse in part
-- 5. Finality of the Assembly's Judicial Decisions