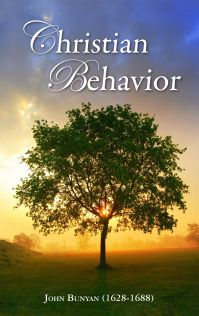 This valuable practical treatise, was first published as a pocket volume about the year 1674, soon after the author's final release from his long and dangerous imprisonment. It is evident from the concluding paragraph that he considered his liberty and even his life to be still in a very uncertain state; not from the infirmities of age, for he was then in the prime of life; but from the tyranny of the government, and probably from the effects of his long incarceration in a damp, unhealthy jail. It is the best and most scriptural guide that has ever appeared to aid us in the performance of relative duties: written with originality of thought and that peculiar and pious earnestness which so distinguishes all his works.

No one can read this book, without finding in it his own portrait truly and correctly drawn to the life. Many have been the hearers of the word in its public ministration, who have been astonished that a faithful minister has not only opened their outward conduct, but the inward recesses of their hearts and have inquired with wonder, 'Where could he get such a knowledge of my heart?' The usages and feelings of every part of the human family the rich and poor outward professors or openly profane God fearers or God defiers are displayed in the following pages as accurately as if the author had been present in every family upon earth, and had not only witnessed the conduct of the happy and of the miserable in every grade; but he goes within and unvails that mystery of iniquity the human heart, its secret springs, feelings, and machinations.

What mysterious power could this uneducated man have possessed, thus to dive into the most subtle of all secret repositories, the human heart! Could he have left his body at times and his invisible spirit have entered all chambers, as was said of an ancient philosopher, [1] still time would have been too short even to have transiently surveyed outward conduct; and then he could not have entered into the thoughts of others. Reader, the fountain of all hidden things was open to him. Shut up for many years in prison, with the key in his possession which unlocks all the mysteries of earth, and heaven, and hell he diligently used his time and all was revealed to him. He makes the source of his knowledge no secret, but invites you to search, as he did, this storehouse of things new and old. It was the Bible which unfolded to him all the great events of time and of eternity all the secret springs of states, and families, and individuals wonderous book! It made an uneducated artizan wiser than all the philosophers who have been contented with Plato, Aristotle, Pliny, Plutarch, and the most renowned of human writers. Not only is the real state of human nature revealed with unerring truth, as suffering under a cruel malady, strangely diverse in its operations, but all tending to the downward, dark, dreary road to misery temporal and eternal: but it also displays the antidote; an infallible remedy against all the subtilties of this tortuous disease. Reader, this treasure is in our hands. How great is the responsibility.

How blessed are those who with earnest prayer for divine illumination, read, ponder, and relying upon the aid of the Holy Spirit, understand and instantly obey the sacred precepts which its pages unfold. Weigh well their nature and tendency, as Bunyan opens them in this invaluable treatise. They lead step by step from darkness to light. It may be a tempestuous passage in the dim twilight, as it was with him, but it is safe and leads to the fountain of happiness the source of blessedness the presence and smiles of God and the being conformed to his image. In proportion as we are thus transformed in our minds, we shall be able to fulfil all our duties and behavior as becometh Christians. We dare not seek to avoid these duties because they are full of anxieties. Blessed are those who know and feel the ties of church fellowship or the nearer union of husband and wife, that type of the mystical union of Christ and his church. Happy are those who piously discharge parental and filial duties, that figure of the relationship which the Almighty, in infinite condescension, owns between him and his fallen but renewed creatures.

... we are bound, in the expectation of the divine approbation, not to shrink from duties, but to seek wisdom to fulfil them; and in this little work we have a scriptural guide to which we shall do well to take heed. It is a peculiarly solemn legacy the author's ardent desire is thus expressed; 'Before I die [as the greatest of all the duties he had to perform] let me provoke you to faith and holiness.' Be it our duty and privilege to examine our conduct faithfully by those portions of holy writ, with which this treatise is beautifully adorned. It was written in the prospect of sufferings and death, and yet how serene was his soul. No cloud, no doubts or fears are seen; his legacy to us as well as to those who survived him is, 'Love one another when I am deceased.' My labours of love to you are limited to this world. 'Though there I shall rest from my labours, and be in paradise, as through grace, I comfortably believe; yet it is not there but here I must do you good.' Consider what he has advanced, and the scriptures by which every sentence is confirmed, and may his concluding and fervent prayer be answered to our souls: 'The Lord give us understanding in all things. Farewell.' GEO. OFFOR.