Christ and His Church in the Book of Psalms (eBook) 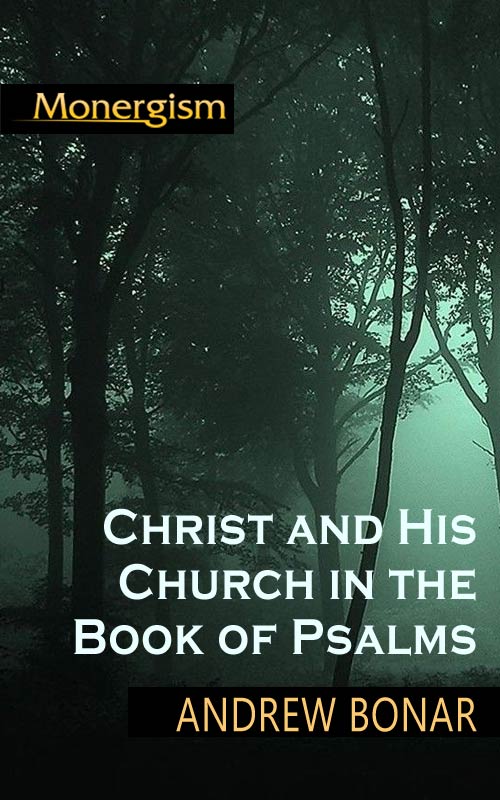 FEW of the Books of Scripture are richer than the Book of Psalms, that "Hymn-book for all times," as it has been called. "There," says Luther, "you look right down into the heart of saints, and behold all manner of joys and joyous thoughts toward God and his love springing lustily into life! Again, you look into the heart of saints as into death and hell! How gloomy and dark their mournful visions of God." Another has said, "The Psalms teach me to prize a much tried life." And Tholuck (who gives these quotations) remarks, "Songs which, like the Psalms, have stood the test of three thousand years, contain a germ for eternity."

The Psalms are for all ages alike—not more for David than for us. Even as the cry, "It is finished!" though first heard by the ear of John and the women from Galilee, who stood at the cross, was not meant for them more truly than for us; so with the Psalms.

The writers were prepared by God, through personal and public circumstances, for breathing forth appropriately the mind of Him who used them. Irving, in his preface to Horne on the Psalms, has spoken some most valuable truths on this subject. He remarks that the Psalms, like the prophetic writings, "arose by the suggestion of some condition of the Church, present in the days of the prophets, as the particular case. But passing beyond this in time, and passing beyond it in aggravation of every circumstance, they give as it were a consecutive glance of all the like cases and kindred passages in the history of the Church, and bring out the general law of God's providence and grace in the present, and in all the future parallel cases." The Psalmist, however, was not to be an automaton, nor his readers mere lookers on or listeners to what the automaton gives forth. "Therefore, God moulded his man to his purpose, and cast him into the conditions that suited his ends. And still he was a man, acted on by course of nature, and manifest to the people as a fellow-man, through whom, indeed, they heard soul-stirring truths, uttered with ear-piercing words, but suited to their case, and thrust in their way, and spoken to their feelings, and pressed on their consciences, and riveted there by the most mighty sanctions of life and death, present and eternal." "And as THE WORD which was in the beginning took not voice, nor intelligence, but flesh, human flesh, and the fulness of the Godhead was manifested bodily; so when that same Word came to the fathers by the prophets, and discovered a part of his fulness, it was through their flesh, or their humanity—that is, through their present condition of spirit, and mind, and body, and outward estate."

It was for this end that God led David the round or all human conditions, that he might catch the spirit proper to every one, and utter it according to the truth. "He allowed him not to curtail his being by treading the round of one function; but by a variety of functions he cultivated his whole being, and filled his soul with wisdom and feeling. He found him objects of every affection. He brought him up in the sheep-pastures, that the groundwork of his character might be laid through simple and universal forms of feeling. He took him to the camp, that he might be filled with nobleness of soul, and ideas of glory. He placed him in the palace, that he might be filled with ideas of majesty and sovereign might. He carried him to the wilderness and placed him in solitudes, that his soul might dwell alone in the sublime conception of God and his mighty works. And he kept him there for long years, with only one step between him and death, that he might be well schooled to trust and depend upon the providence of God. And in none of these various conditions and vocations of life did He take from him His Holy Spirit. His trials were but the tuning of the instrument with which the Spirit might express the various melodies which He designed to utter by him for the consolation and edification of spiritual men. John the Baptist, having to be used for rough work, was trained in the desert.… Every one hath been disciplined by the providence of God, as well as furnished in the fountains of his being, for that particular work for which the Spirit of God designed him."

The literal and historical sense is in the highest degree profitable; as Calvin, and Venema, and Matthew Henry, and others, have shewn. But our principle is, that having once found the literal sense, the exact meaning of the terms, and the primary application of the Psalm, we are then to ask what the Holy Spirit intended to teach in all ages by this formula. Bishop Horne speaks of such study as being like a traveller's ascent to an eminence, "neither unfruitful nor unpleasant," whence he gets an extensive prospect lying beyond, and stretching away to the far distance. Bishop Horsley quotes 2 Sam. 23:3, "The Spirit of Jehovah spake by me, and His word was in my tongue"—and adds, "If David be allowed to have had any knowledge of the true subject of his own compositions, that subject was nothing in his own life, but something put into his mind by the Holy Spirit of God." This is so far true; but at the same time let us hold (as stated above) that what the Spirit put into David's mind, or the mind of any other writer, was done not abruptly, but in connection with the writer's position. Even as our Lord's sayings for all ages were not uttered at random in any circumstances, but were always connected naturally with some present passing event or incident. "Jesus answered and said," is true of them all: he strang his pearls on the thread of passing occurrences or conversations. And even so is it with the Psalms. They take their rise in things local and temporary, but they pass onward from the present into the ages to come.

Now, in the early ages, men full of the thoughts of Christ could never read the Psalms without being reminded of their Lord. They probably had no system or fixed theory as to all the Psalms referring to Christ; but still, unthinkingly we might say, they found their thoughts wandering to their Lord, as the one Person in whom these breathings, these praises, these desires, these hopes, these deep feelings, found their only true and full realization. Hence Augustine (Psa. lviii.) said to his hearers, as he expounded to them this book, that "the voice of Christ and his Church was well-nigh the only voice to be heard in the Psalms"—"Vix est ut in Psalmis inveniamus vocem nisi Christi et Ecclesiae;" and on another occasion (Psa. xliii.), "Everywhere diffused throughout is that man whose Head is above, and whose members are below. We ought to recognise his voice in all the Psalms, either waking up the psaltery or uttering the deep groan—rejoicing in hope, or heaving sighs over present realities." Tertullian (quoted by Horne) says, "Omnes pocne Psalmi Christi personam sustinent."

We set out with laying down no other principle of interpretation in regard to the speakers in these sacred songs, than this one,—viz., we must consider this book as "not of private interpretation," (2 Peter 1:20). Its utterances did not originate with the authors themselves. It is one of those writings which "holy men of God spake as they were moved by the Holy Ghost;" and therefore it is decidedly erroneous to suppose, that because David, or any other, was the author, that therefore nothing is spoken of, or sung, but matters in which they were mainly or primarily concerned. "Not unto themselves, but unto us they did minister," is true here also, (1 Pet. 1:12). We cannot err far, therefore, if with Amyrauld we keep "our left eye on David, while we have our right eye full on Christ." In some instances, the Head exclusively speaks, or is spoken of, and in a few others the Members alone; but generally, the strain is such in feeling and matter, that the Head and Members together can use the harp and utter the song. And so important are these holy songs, that nearly fifty of them are referred to in the New Testament, and applied to Christ.

Hengstenberg has evidently felt, in spite of his dread of admitting Messiah into the Psalms too often, that one individual was very generally present to the writer's mind. He is constrained to admit that reference is made to some ideal perfect one, or some ideal righteous one, who is the standard.* Unwittingly he thus grants the fact, that none can read those songs of Zion without being led to think upon some one individual as the ever-recurring theme. And as the Scriptures do not speak in the style of philosophy, we may safely say, that the reference in all these cases is not to any abstract ideal person, but to the real living One, in whom all perfections meet, and against whom all the plots and malice of hell have ever been directed—Messiah, the Righteous One.

There is in almost every one of all these Psalms something that fitted them for the use of the past generations of the Church, and something that fits them admirably for the use of the Church now; while also there is diffused throughout a hint for the future. There is, we might say, a past, a present, and a future element.* Few of them can be said to have no prophetic reference, no reference to generations or events yet to arise,—a circumstance that gives them a claim upon the careful study of every one who searches into the prophetic records, in addition to the manifold other claims which they possess.

The substance of these Notes (for they are no more than notes) appeared originally in the "Quarterly Journal of Prophecy." They are meant to help those who delight to search the Scriptures. There are also gleanings from many fields here and there presented to the reader; for the Author has consulted writers on the Psalms of all different shades of opinion, even where he simply states the conclusion at which he has arrived as to the true sense of the passage.