The Canons of Dort (eBook) 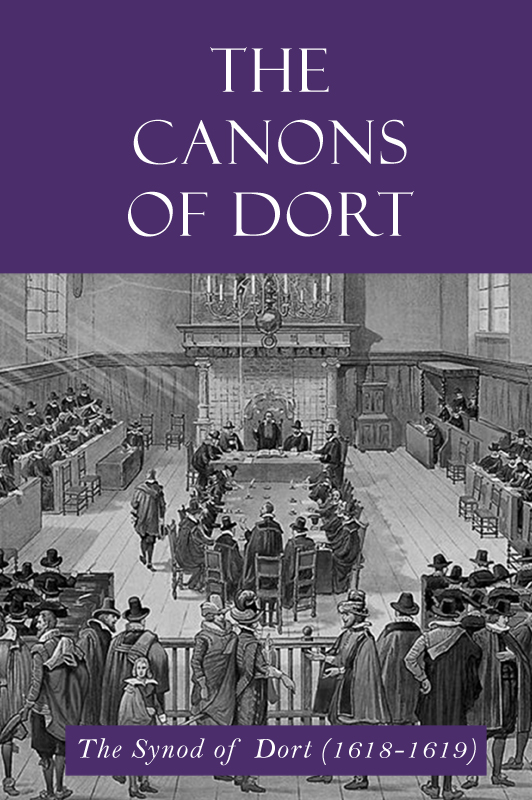 I don’t remember anymore the precise moment I encountered the Canons of Dort. I do remember it was while in college in my dorm’s computer lab. More importantly, I remember instantly falling in love with the Canons as I discovered the roots of my faith and of the holy catholic church. As my mind was enlightened with truth, my heart was enlivened with awe, humility, and praise to the Triune God who saved me by his grace.

As a pastor I’ve taken many notes on the beloved Canons, read anything I could find on them, taught them to inquirers in my congregation, to my church family in Sunday school settings, and even used them as guides for preaching the doctrines of the Word. Knowing the four hundredth anniversary of this 1618–19 Synod (a gathering of church and political leaders from across Europe in the Dutch town of Dordrecht) was around the corner, I wanted to put something together like I had done several years previous for another Reformation confession of faith: the Belgic Confession. I’m grateful to The Davenant Institute for deciding to partner with me in bringing my study and research to print. As this book has its public “launch” (and hopefully not a push over the precipice!), let me give you four reasons why I love the Canons of Dort, which encapsulate what Grace Worth Fighting For is all about.

First and foremost, I love the Canons of Dort because they express God’s grace to sinners. When you read them for yourself you’ll see that they do not merely describe from afar static doctrines; they profess God’s personal grace to personal sinners. One of the reasons I wrote this book is because of how prevalent these caricatures and misperceptions of “Calvinism” are in evangelical Christian circles. I cannot tell you how often I get asked by visitors to our congregation or by members trying to explain to their friends, what is “predestination” all about? I like to encourage them to take a step back and talk about the God of predestination so that it is personal. As you read the Canons for yourself, you’ll see that, contrary to populist opinion, “double predestination” (which itself needs to be carefully defined) is not behind every corner, controlling every other doctrine. You’ll see that predestination is not a central dogma to the Reformed theological system; it’s there, but only because God reveals it as an expression of his grace.

Second, I love the Canons of Dort because they express and apply catholic theology to a particular controversy. In other words, if you come to the Canons having just read your daily devotional of Boettner, Hoeksema, Sproul, or Steele & Thomas hoping for confirmation of these exponents of “the Reformed view” of one of the petals on the TULIP, you’re in for a few surprises. Do you think that the Reformed made a clean break with medieval versions of election and reprobation? Think again. Do you think “Christ died for the elect, period,” is the Reformed view of so-called “limited atonement?” Keep reading. What about the Canons’ article on “irresistible grace?” The Reformed at the time of Dort abhorred that word “irresistible.” “Once saved, always saved” is the Reformed view on perseverance, right? Like I said; surprises abound. This is one of the areas I’ve grown in over the years as I’ve read, studied, and taught through the so-called “doctrines of grace.” It seems human nature gravitates to extremes, as we see in our national political discourse; sadly we do the same in our theology. The Canons, as the definition of various aspects of God’s grace, ironically lay out a catholic and consensus view and not fire-breathing, cage-phase Calvinism.

“What you’ll see as you read through the Canons is that real men wrote them. These were men who were professors of young, immature students; men who pastored in rural, lowly educated parishes.”

Third, I love the Canons of Dort because they express a realistic view of human nature and of the Christian life. Like I said above, the Canons are no mere 35,000-foot view of philosophical Calvinism; they’re all about a personal God’s grace to persons. What you’ll see as you read through them is that real men wrote them. These were men who were professors of young, immature students; men who pastored in rural, lowly educated parishes; men who pastored in cities where the slogan could very well have been, “What happens in Dordrecht, stays in Dordrecht.” The Canons are full of pastoral insight: there are all kinds of people who respond in all kinds of ways to God’s grace in Jesus Christ. Even within the community of Christians, there are strong believers, there are weak believers, there are those prone to stumble and fall, and everything in between. Because of our variegated human experience of sin and grace, pastors are not to deal with everyone in precisely the same way. This theme comes up again and again in the Canons’ discussion of assurance of faith.

Fourth, I love the Canons of Dort because they express so much more than TULIP. “Don’t you believe in the TULIP thing?” That’s one of the common things I hear when I tell people I’m a Reformed pastor. TULIP is the acronym for Total depravity, Unconditional election, Limited atonement, Irresistible grace, and Perseverance (or Preservation) of the saints. It’s supposedly what the Synod of Dort decided on contra the Arminians. Yet, this is a nineteenth-century American over-simplification, actually re-orders the order of the Canons, and would’ve been an impossible acronym for a seventeenth-century Dutchman since his word for “tulip” would have been tulp. As I’ve said, the Canons of Dort are about God’s grace, not detached and distant doctrines. And even when they discuss those doctrines as aspects of God’s amazing grace, they do so in well-rounded biblical ways, mindful of the catholic Christian past, and with plenty of practical application throughout. For example, if you read a modern introduction to TULIP you’re more than likely not going to read anything about the practical problem predestination poses to the Christian mom and dad whose infant daughter or son has just died. But the Canons do!

I encourage you to take up and read the Canons of Dort and be enraptured in the love (even again) of the God they proclaim.

Introduction: Why I Love the Canons of Dort

Doctrine I : Divine Election and Reprobation

Doctrine II: Christ's Death and Human Redemption Through It

Doctrines III & IV: Human Corruption, Conversion to God, and the Way It Occurs

Doctrine V: The Perseverance of the Saints