Practical Religion (eBook)
God "Remembers" His Covenant
Purgatory is a Deadly Fiction
Ten Simple Things You Can Do To Get More Out of Worship
The Privileges of the True Christian
A Concise Exegetical Defense of "Particular Redemption" in the Book of John
Good Works and the Justified Christian
Conversion, and God's Responsibility of It
Rome Vs. Augustine on Free Will
Thoughts on Religious Experience (eBook)

A Body of Doctrinal Divinity (eBook) 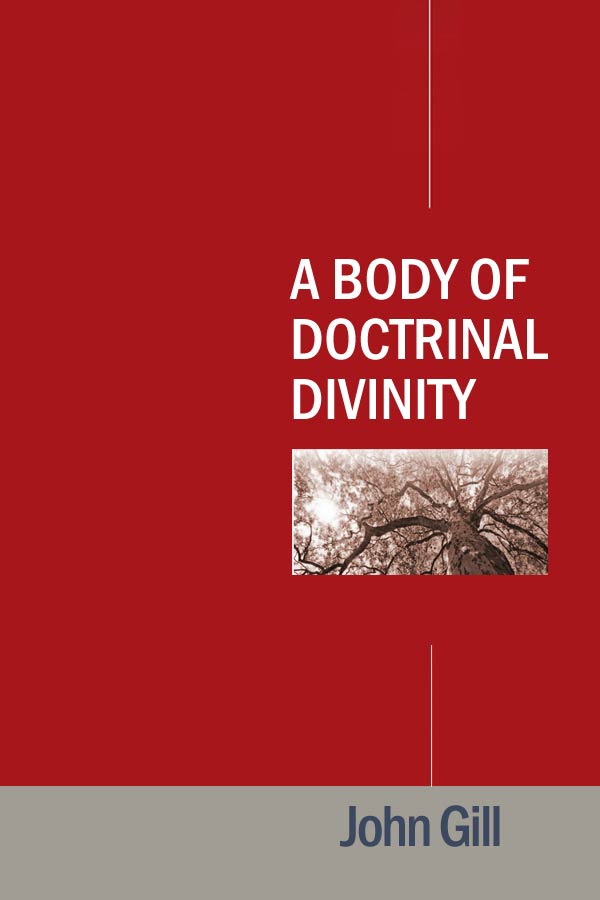 Having completed an Exposition of the whole Bible; I considered with myself what would be best next to engage in for the further instruction of the people under my care; and my thoughts led me to enter upon a Scheme of Doctrinal and Practical Divinity. Doctrine has an influence upon practice, especially evangelical doctrine, spiritually understood, affectionately embraced, and powerfully and feelingly experienced. Where there is not the doctrine of faith, the obedience of faith cannot be expected.

John Gill (23 November 1697 – 14 October 1771) was an English Baptist, biblical scholar, "Jehovist", and held to a staunch Calvinistic Soteriology. Born in Kettering, Northamptonshire, he attended Kettering Grammar School where he mastered the Latin classics and learned Greek by age 11. He continued self-study in everything from logic to Hebrew, his love for the latter remaining throughout his life.

BOOK I: Of God, His Words, Names, Nature, Perfections, and Persons.

BOOK II: Of the Acts and Works of God.

BOOK III: Of the Eternal Works of God.

1. Of Creation in General.
2. Of the Creation of Angels.
3. Of the Creation of Man.
4. Of the Providence of God.
5. Of the Confirmation of the Elect Angels, and the Fall of the Non-Elect.
6. Of the Honour and Happiness of Man in a State of Innocence.
7. Of the Law Given to Adam, and the Covenant made with Him in the State of Innocence...
8. Of the Sin and Fall of our First Parents.
9. Of the Nature, Aggravations, and Sad Effects of the Sin of Man.
10. Of the Imputation of Adam's Sin to all His Posterity.
11. Of the Corruption of Human Nature.
12. Of Actual Sins and Transgressions.
13. Of the Punishment of Sin.

BOOK IV: Of the Acts of the Grace of God, Towards, and Upon His Elect in Time.

BOOK V: Of the Grace of Christ in His States of Humiliation and Exaltation, and in the Offices Exercised by Him in Them.

BOOK VI: Of the Blessings of Grace, and the Doctrines of It.

BOOK VII: Of the Final State of Man.

1. Of the Death of the Body.
2. Of the Immortality of the Soul.
3. Of the Separate State of the Soul Until the Resurrection, and Its Employment in that State.
4. Of the Resurrection of the Body.
5. Of the Second Coming of Christ, and His Personal Appearance.
6. Of the Conflagration of the Universe.
7. Of the New Heavens and Earth, and the Inhabitants of Them.
8. Of the Millennium, or Personal Reign of Christ with the Saints on the New Earth a Thousand Years.
9. Of the Last and General Judgment.
10. Of the Final State of the Wicked in Hell.
11. Of the Final State of the Saints in Heaven.

Forgiving One Another
J C Ryle
The Rich Young Man
J C Ryle
Christ's Transfiguration
J C Ryle
Little Screens and Corporate Worship
H.B. Charles Jr.
The Lord’s Supper Is Not Penance
R Scott Clark
Are You Unintentionally Joining the Pride Parade?
Erik Raymond
How Not to Correct a Fellow Christian
John Piper
How social media can impede our witness: The disconnect of the digital life
Jason Thacker
Practical Religion (eBook)
Christ Mended What Adam Broke (YouTube)
Michael Reeves
The Works of Thomas Adams (eBook)
Thomas Adams
What the Book of John Says About Eternal Life
Jim Elliff
Book Hoarding
Jim Elliff
Why Our Secular Age Needs Ecclesiastes
Kevin Halloran
God’s singular sovereign agency
Scott Swain
Why Did God Allow Polygamy?
Samuel Emadi
Work, Rest, Repeat
Curated Resources
When Critical Theory Took on Race
Matthew Neilsen
The Context of The Great Commission is a Miracle
Erik Raymond
Feed My Sheep
Greg Bahnsen
God’s Glorious Answer to the Evil of Our Present Day
Scott Christensen
The Salami Tactics that lead to a Church Without Christianity
David Robertson
Does Romans 7 depict a Jew under the law or a believer struggling with sin?
Steven J Lawson, Derek Thomas
Four Ways to Teach Children How to Work
Curated Resources
What Is Spiritual Watchfulness and Why Does It Matter?
Wilhelmus a Brakel
The Reality of Human Trafficking
Rev David P Murray
The Fear of Death and God’s Grip
Jim Elliff
The Logic of Westminster's Confession
Jeffrey Stivason
What Does the Death of Cultural Christianity Cost?
Andrew Walker
Is the Old Testament Unintelligible without the New? Important Considerations on the Relationship between the Testaments
Brad Klassen
Five Suggested Guidelines for Pastors and Church Staff on Social Media
Thom S Rainer
The Most Notable Effects of the First and Second Great Awakenings
Thomas Kidd
We Seek a Better City: The Liberating Power of Christian Hope
David Mathis
Assume the Best of Others: Resilient Love in an Age of Suspicion
Greg Morse
Watson’s Wisdom on Prayer
Donald K McKim
On Masks, Vaccines, and Church Unity
Adam Parker
Martin Luther on Christian Friendship
Austin Hobbs
Michael Youssef’s Views on Woke Pastors; Biblical Liberalism All Over Again
Dr Harry L Reeder III
Explaining Biblical Inerrancy
R C Sproul
Is Critical Race Theory Leading to Catastrophe in the Church?
Voddie Baucham
Trouble of Mind and the Disease of Melancholy (YouTube Audio Book)
Timothy Rogers
A Discourse Concerning Trouble of Mind, and the Disease of Melancholy (eBook)
Timothy Rogers
How to Learn Contentment
J R Miller
Adoption: Meeting a Desperate Need
Dan Cruver
The Deity of Christ
Kim Riddlebarger
Hear Anything Lately About the Wrath of God? The Silence Is Deafening
Kim Riddlebarger
Joseph's Faith in the Face of Death
Kim Riddlebarger
God will not Forsake His Saints
Mike Ratliff
Why I Left The Mormon Church
Curated Resources
Think Small for Big Improvements in Preaching
Jonathan T Pennington