To Will Well is of Grace 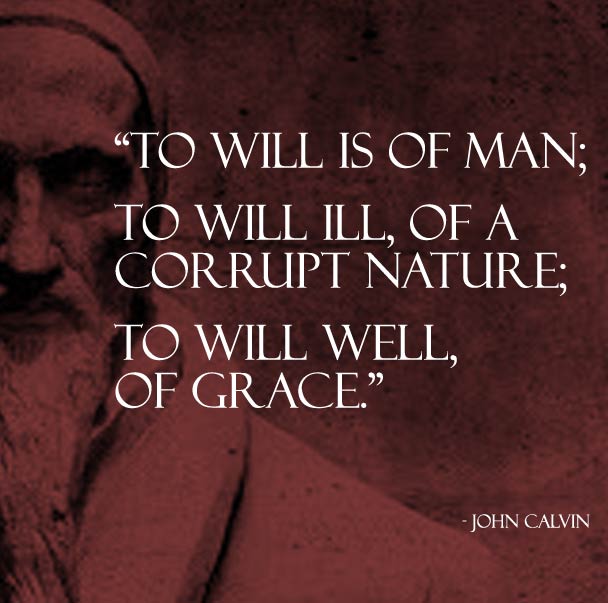 "Because of the bondage of sin by which the will is held bound, it cannot move toward good, much less apply itself thereto; for a movement of this sort is the beginning of conversion to God, which in Scripture is ascribed entirely to God’s grace. So Jeremiah prayed to the Lord to be 'converted' if it were his will to 'convert him' [Jer. 31:18, cf. Vg.]. Hence the prophet in the same chapter, describing the spiritual redemption of the believing folk, speaks of them as 'redeemed from the hand of one stronger than they' [v. 11 p.]. By this he surely means the tight fetters with which the sinner is bound so long as, forsaken by the Lord, he lives under the devil’s yoke. Nonetheless the will remains, with the most eager inclination disposed and hastening to sin. For man, when he gave himself over to this necessity, was not deprived of will, but of soundness of will. Not inappropriately Bernard teaches that to will is in us all: but to will good is gain; to will evil, loss. Therefore simply to will is of man; to will ill, of a corrupt nature; to will well, of grace.

"Now, when I say that the will bereft of freedom is of necessity either drawn or led into evil, it is a wonder if this seems a hard saying to anyone, since it has nothing incongruous or alien to the usage of holy men. But it offends those who know not how to distinguish between necessity and compulsion. Suppose someone asks them: Is not God of necessity good? Is not the devil of necessity evil? What will they reply? God’s goodness is so connected with his divinity that it is no more necessary for him to be God than for him to be good. But the devil by his fall was so cut off from participation in good that he can do nothing but evil. But suppose some blasphemer sneers that God deserves little praise for His own goodness, constrained as He is to preserve it. Will this not be a ready answer to him: not from violent impulsion, but from His boundless goodness comes God’s inability to do evil? Therefore, if the fact that he must do good does not hinder God’s free will in doing good; if the devil, who can do only evil, yet sins with his will—who shall say that man therefore sins less willingly because he is subject to the necessity of sinning? Augustine everywhere speaks of this necessity; and even though Caelestius caviled against him invidiously, he did not hesitate to affirm it in these words: “Through freedom man came to be in sin, but the corruption which followed as punishment turned freedom into necessity.” And whenever he makes mention of the matter, he does not hesitate to speak in this manner of the necessary bondage of sin.

"The chief point of this distinction, then, must be that man, as he was corrupted by the Fall, sinned willingly, not unwillingly or by compulsion; by the most eager inclination of his heart, not by forced compulsion; by the prompting of his own lust, not by compulsion from without. Yet so depraved is his nature that he can be moved or impelled only to evil. But if this is true, then it is clearly expressed that man is surely subject to the necessity of sinning.

"Bernard, agreeing with Augustine, so writes: 'Among all living beings man alone is free; and yet because sin has intervened he also undergoes a kind of violence, but of will, not of nature, so that not even thus is he deprived of his innate freedom. For what is voluntary is also free.' And a little later: 'In some base and strange way the will itself, changed for the worse by sin, makes a necessity for itself. Hence, neither does necessity, although it is of the will, avail to excuse the will, nor does the will, although it is led astray, avail to exclude necessity. For this necessity is as it were voluntary.' Afterward he says that we are oppressed by no other yoke than that of a kind of voluntary servitude. Therefore we are miserable as to servitude and inexcusable as to will because the will, when it was free, made itself the slave of sin. Yet he concludes: 'Thus the soul, in some strange and evil way, under a certain voluntary and wrongly free necessity is at the same time enslaved and free: enslaved because of necessity; free because of will. And what is at once stranger and more deplorable, it is guilty because it is free, and enslaved because it is guilty, and as a consequence enslaved because it is free.' Surely my readers will recognize that I am bringing forth nothing new, for it is something that Augustine taught of old with the agreement of all the godly, and it was still retained almost a thousand years later in monastic cloisters. But Lombard, since he did not know how to distinguish necessity from compulsion, gave occasion for a pernicious error."

Universally Binding Standards
Let Go of Lies About Heaven: Eight Myths Many Believe
Randy Alcorn
What Billions Say in Silence: The Deafening Sermons of the Stars
Jon Bloom
How can we defend the doctrine of Sola Scriptura using Scripture?
R C Sproul
Ethics and the Conscience
R C Sproul
The Strange Language of Classical Theism
Keith Mathison
The God Who Sings
Keith Mathison
Canceled: How the Eastern Honor-Shame Mentality Traveled West
Abdu Murray
How Church History Can Help You Defend the Faith
Michael Haykin
Irreconcilable Views of Reconciliation
Voddie Baucham
America’s Newest Religion
Eric Davis
The Sin of Discontent
Jeremiah Johnson
Where Have You Placed Your Hope?
Total Substitution (YouTube)
John Samson
A Prayer for Mercy
Kevin DeYoung
Why Expository Preaching?
H.B. Charles Jr.
Why Do (Modern) Christians Rarely Talk about Rewards in Heaven?
Michael J Kruger
Group of PCA Coordinators and Presidents Issues Statement on “Heinous Killings”
PCA News
How Should Christians respond to Racism
Adriel Sanchez
What You Need to Know about the Devil's Tricks
Andrew Menkis
God’s Glory In His Presence
Daniel Hyde
God’s Glory In The Tabernacle
Daniel Hyde
Protest and Anarchy in Black and Blue
Carl Ellis
Discussing Ken Wilson’s Work on Augustine (Multipart Series)
James White
Top Myths about Reformed Theology (YouTube)
Kim Riddlebarger
The Universe Shouldn’t Exist, CERN Scientists Announce
Philip Perry
Millionalism and Transformationalism Should be Abandoned
S.M. White
The Church’s Central Role in the Coming of the Kingdom of God
Kevin DeYoung
Prayer as a Means of Grace
Christopher Gordon
The Witness of the Communion of Saints
A Craig Troxel
Homiletics and Pastoral Theology (eBook)
W. G. T. Shedd
Handling Trials; Rebuking Pride
Joel R Beeke
How Did Paul Understand ‘Faith’?
Guy Waters
How Do I Find Peace in the Midst of Fear?
Ed Welch
Why Expository Preaching Is Jesus Centered
Josh Buice
How Could a Sovereign, Good God Allow Suffering?
Jerod Gilcher
The Peace of the Cross
Nicholas T Batzig
What Is a Means of Grace?
Nicholas T Batzig
The Sacraments as Means of Grace
Dr William Barcley
The Word of God as a Means of Grace
Ligonier Ministries
The Heart of the Matter for Secularists. How Do You Know that Racism is Wrong?
Hebrews (Sermon Series)
J. A. Medders
The Hard Sayings of Jesus (Sermon Series)
J. A. Medders
First John: God is Light, God is Love
J. A. Medders
Galatians: Radical Grace (Sermon Series)
J. A. Medders
Be Content in God's Providence
Cameron Buettel
God’s Glory In The Tabernacle Entrance
Daniel Hyde
How Patient Is God With Us?
Nicholas T Batzig
American Gospel: Christ Alone (Netflix Video)
Reformed Study
A History of Christian Doctrine (eBook)
W. G. T. Shedd