The Necessity of Word & Spirit in Conversion

The following is an expression of the extraordinarily balanced understanding of John Calvin with regards to the work of the Holy Spirit in bringing persons to faith through the preaching of the gospel. Commenting on Acts, it shows the outworking of God's plan through the agency of men in casting forth the seed of the gospel, which, the Bible testifies, can only be responded to when germinated (so to speak) by the Holy Spirit. The Scripture testifies that that the word alone is not enough to enter and change the heart of natural man (who is hostile to God's word) but that the heart must be opened and the mind illumined by the concurrent work of the Spirit. An biblical example of this can be found in 1 Thes 1:4, 5. "For we know, brothers loved by God, that he has chosen you, 5because our gospel came to you not only in word, but also in power and in the Holy Spirit and with full conviction..." 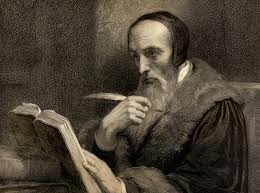 “One who heard us was a woman named Lydia, from the city of Thyatira, a seller of purple goods, who was a worshiper of God. The Lord opened her heart to pay attention to what was said by Paul.” Acts 16:14-15

Now when in fact only one hears attentively and effectively, could it not have appeared that the way was blocked for Christ to make an entry? But afterwards from that frail shoot a famous church sprang up, whose praises Paul sings in splendid terms. Yet it is possible that Lydia had some companions, of whom no mention is made, because she herself far surpassed them. Yet Luke does not attribute the cause for this one woman having shown herself docile, to the fact that she was sharperwitted than the others, or that she had some preparation by herself, but says that the Lord opened her heart, so that she gave heed to Paul’s words. He had just praised her piety; and yet he shows that she could not understand the teaching of the Gospel without the illumination of the Spirit. Accordingly we see that not only faith, but also all understanding of spiritual things, is a special gift of God, and that ministers do not accomplish anything by speaking, unless the inward calling of God is added at the same time.

By the word heart Scripture sometimes means the mind, as when Moses says (Deut. 29:4), ‘until now the Lord has not given you a heart to understand.’ So also in this verse Luke means not only that Lydia was moved by the inspiration of the Holy Spirit to embrace the Gospel with a feeling of the heart, but that her mind was illuminated to understand. We may learn from this that such is the dullness, such the blindness of men, that in hearing they do not hear, or seeing they do not see, until God forms new ears and new eyes for them.

But we must note the expression that the heart of Lydia was opened so that she paid attention to the external voice of a teacher. For as preaching on its own is nothing else but a dead letter, so, on the other hand, we must beware lest a false imagination, or the semblance of secret illumination, leads us away from the Word upon which faith depends, and on which it rests. For in order to increase the grace of the Spirit, many invent for themselves vague inspirations so that no use is left for the external Word. But the Scripture does not allow such a separation to be made, for it unites the ministry of men with the secret inspiration of the Spirit. If the mind of Lydia had not been opened, the preaching of Paul would have been mere words; yet God inspires her not only with the mere revelations but with reverence for His Word, so that the voice of a man, which otherwise would have vanished into thin air, penetrates a mind that has received the gift of heavenly light.

Therefore let us hear no more of the fanatics who make the excuse of the Spirit to reject external teaching. For we must preserve the balance which Luke established here, that we obtain nothing from the hearing of the Word alone, without the grace of the Spirit, and that the Spirit is conferred on us not that He may produce contempt of the Word, but rather to instill confidence in it in our minds and write it on our hearts.

Sharp Tongues And Angry Tweets
Darryl Dash
Let Your Heart Take Courage
Jon Bloom
Against Every Accusation: What to Say When Satan Whispers
Scott Hubbard
Hell's Hotbed of Hatred - John 8:48-59
Steven J Lawson
The Most Provocative Message Ever Given - John 8:21-30
Steven J Lawson
Why God Makes You Wait
Tim Challies
The Grace of Waiting
Nicholas T Batzig
Waiting Upon the Lord - Isaiah 40:12-41
David VanDrunen
God’s School of Waiting
Jeff Robinson
Waiting, Wasting, Wandering
Kevin DeYoung
5 Reasons Why God Calls Us to Wait
Paul D Tripp
God’s Will for Your Wait
Paul D Tripp
The Strength of Waiting
James Faris
Waiting on the Lord
Christina Fox
Waiting for God Alone
Jon Bloom
4 Life Changing Ways To Wait On The Lord (and 3 Huge Blessings)
Stephen Altrogge
The Waiting Is the Hardest Part
David Mathis
What does it mean to wait on the Lord?
Got Questions
Encouragements to Patient Waiting
John MacDuff
Today's Cancel Culture
The Excellency of Christ (eBook)
John Owen
The Just Shall Live by His Faith (eBook)
John Owen
The Just Shall Live by His Faith: Faith in a Time of Public Calamity - Hab 2:4
John Owen
Jesus, Satan and the New Age
Steven Bancarz
The Surprising Transformation of the Disciples of Jesus
Ryan Higginbottom
Daniel’s Vision of the Son of Man
Keith Mathison
What Is an Evangelical?
W Robert Godfrey
Arrogance
Mike Ratliff
Blog Share What Is Self-Discipline?
Steven J Lawson
The Fear of the Lord . . . for today?
Ed Welch
Cheap knockoffs: Five Christian heresies that made the modern world
Janie B. Cheaney
God’s Beauty for the Bored, Busy, and Depressed
Tony Reinke
Does Science Really Disprove God?: Open Letter to an Atheist Loved One
Mitch Stokes
Augustine's Four-fold State of Humanity
Third Mill
What is the Fourfold State of Man?
Rev Joseph R Nally
Do not Let the Algorithm Control You
Wyatt Graham
The Mark of an Educated Mind
Andrew Doyle
Resurrection Life in the Age to Come
Alan W Gomes
Gregory of Nyssa: The Father of Fathers
Shawn J. Wilhite
Hilary of Poitiers: The Hammer of the Arians
Peter Barnes
Why Read Early Christian Authors?: Examining the Modern Life with Help from the Past
Michael Haykin
Augustine of Hippo: A Life Marked by a Deep Commitment to Orthodoxy and Sovereign Grace
Dr William VanDoodewaard
The State of Glory - WCF 9.5
Curated Resources
The State of Innocency (Resources)
Reformed Study
The Will of Man - WCF 9.1
Reformed Study
The State of Glory
Dr Sinclair B Ferguson
The State of Grace
Cornelis P Venema
The State of Nature
Dr William VanDoodewaard
The State of Innocence
Richard Belcher
Who Am I?
Burk Parsons