Doing Math with Dice and Atheism’s Destruction of Knowledge 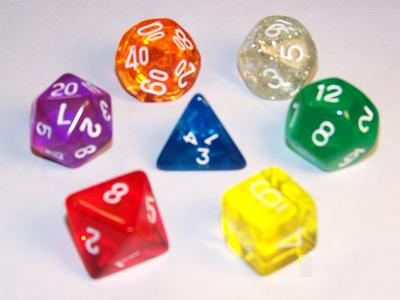 The issue between believers and non-believers in Christian theism cannot be settled by a direct appeal to “facts” or “laws” whose nature and significance is already agreed upon by both parties to the debate. The question is rather as to what is the final reference-point required to make the “facts” and “laws” intelligible. The question is as to what the “facts” and “laws” really are. Are they what the non-Christian methodology assumes that they are? Are they what the Christian theistic methodology presupposes they are?” (Source)

So hopeless and senseless a picture must be drawn of the natural man’s methodology based as it is upon the assumption that time or chance is ultimate. On his assumption his own rationality is a product of chance. On his assumption even the laws of logic which he employs are products of chance. The rationality and purpose that he may be searching for are still bound to be products of chance. So then the Christian apologist, whose position requires him to hold that Christian theism is really true and as such must be taken as the presupposition which alone makes the acquisition of knowledge in any field intelligible, must join his “friend” in his hopeless gyrations so as to point out to him that his efforts are always in vain. (Source: Cornelius Van Til, The Defense of the Faith (P&R, 1972), p. 102.)

Van Til’s own illustration in the famous quote was the following:

Suppose we think of a man made of water in an infinitely extended and bottomless ocean of water. Desiring to get out of water, he makes a ladder of water. He sets this ladder upon the water and against the water and then attempts to climb out of the water. (Source)

But I think the following illustration below would be a helpful supplement to explain why a chance ultimate universe makes knowledge irrational and unintelligible.

Imagine a middle school kid doing his class work in his math class.  He has a lot of math problems.  His method of finding out the solution?  He uses some dice that he rolls out and whatever the number lands on is what he writes down as his answer.  Would anyone think the child truly is learning?  No, his answer is a product of chance.

Now let’s say the child has an exercise that asks what is four multiplied by four.  Of course we know the answer is sixteen.  Remember the child is using his dice to find out the answer.  He rolls two dice and the answer is sixteen. Would anyone say the child truly “know” that sixteen is the solution?  No, again, his answer is a product of chance.  It just happened to land on “sixteen.” Here we see that one of the important aspect of truly knowing something is that one came to the conclusion according to proper methods as oppose to mere chance.  This is an illustration of how methods based upon chance destroys knowledge.  How much more problematic is a worldview that assert that behind every aspect of attaining knowledge is the fury of chance.  Chance melts away knowledge like a bright sun to an ice cube.  Even if it so happen that the right conclusion was reached, chance has reduce every method of knowledge to a game of dice.

POSSIBLE SCENARIO FOR EMPLOYING THIS ILLUSTRATION DURING APOLOGETIC EVANGELISM

NON-CHRISTIAN: Can you explain to me why you keep on thinking an atheistic worldview destroys knowledge?

CHRISTIAN: Let me try.  You don’t believe the universe is the result of God creating it right?

CHRISTIAN: So the universe therefore was not purposely created by a Person in your view.  That is, the universe’ ultimate explanation is chance, in that it is unguided, and non-purposeful.  Now let me mention a scenario.  <INSERT ILLUSTRATION>.  Do you think the child who uses dice to solve his math problem truly know the answer he writes down?

CHRISTIAN: Why is that?

NON-CHRISTIAN: The answer he got was arrived by chance.

Source: The Domain for Truth