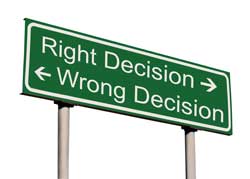 If the concepts of right and wrong are simply a matter of personal choice, we must abandon any idea of declaring moral judgments on the ideas and actions of others. A relativist cannot rationally object to genocide, torture, rape, female circumcision, racism, sexism or slavery if those actions are consistent with another person's moral understanding of what is right and good. When they declare some action as wrong we must honestly ask them, what standard is he/she appealing to that makes it binding on anyone else?

Telling others that it is "best for society" to reject these practices is, at best, a personal preference, and therefore it is wildly inconsistent to bind others to a personal standard by stigmatizing their practices as wrong or evil. While relativists can personally believe others are wrong, but such a belief can only be lived out consistently in silence, even though ironically, like a drumbeat or the drip of a leaky faucet, we hear relativists day after day speaking out about the immorality and bigotry of others as if they really believed it were wrong. We are not declaring that it is wrong to make moral pronouncements, or that relativists are somehow less moral people than others... on the contrary, we are demonstrating with clear and irrefutable reason that they cannot account for the morality they wish to make others live by.

To be consistent, a relativist would "celebrate diversity" when, for example, they hear that Muslims, in other countries, practice female circumcision. But since we all know such silence can not be consistently lived out, relativism is incoherent and cannot stand up under the weight of its own system. Either there is an ultimate standard by which we all need to yield, and all are accountable to, or there is no standard and we should all keep silent until we fade away into the empty abyss from which we came.

"Without absolutes revealed from without by God Himself, we are left rudderless in a sea of conflicting ideas about manners, justice and right and wrong, issuing from a multitude of self-opinionated thinkers" --John Owen

Related Resources
Relativism and the Nature of Truth by Roger L. Smalling, D.Min

No Tolerance in Relativism by Greg Koukl

True for You But Not for Me by Paul Copan