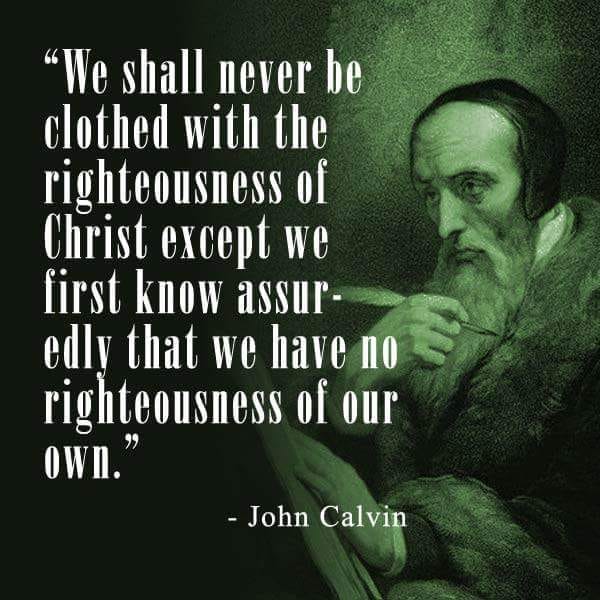 Paul clearly declares that our sins were expiated by the death of Christ, because it was impossible for the law to confer righteousness upon us. It hence follows, that more is required by the law than what we can perform; for if we were capable of fulfilling the law there would have been no need to seek a remedy elsewhere. It is therefore absurd to measure human strength by the precepts of the law; as though God in requiring what is justly due, had regarded what and how much we are able to do.

Because it was weak etc. That no one might think that the law was irreverently charged with weakness, or confine it to ceremonies, Paul has distinctly expressed that this defect was not owing to any fault in the law, but to the corruption of our flesh; for it must be allowed that if any one really satisfies the divine law, he will be deemed just before God. He does not then deny that the law is sufficient to justify us as to doctrine, inasmuch as it contains a perfect rule of righteousness: but as our flesh does not attain that righteousness, the whole power of the law fails and vanishes away. Thus condemned is the error or rather the delirious notion of those who imagine that the power of justifying is only taken away from ceremonies; for Paul, by laying the blame expressly on us, clearly shows that he found no fault with the doctrine of the law.

But further, understand the weakness of the law according to the sense in which the Apostle usually takes the word ασθενεια, weakness, not only as meaning a small imbecility but impotency; for he means that the law has no power whatever to justify.  241 You then see that we are wholly excluded from the righteousness of works, and must therefore flee to Christ for righteousness, for in us there can be none, and to know this is especially necessary; for we shall never be clothed with the righteousness of Christ except we first know assuredly that we have no righteousness of our own. The word flesh is to be taken still in the same sense, as meaning ourselves. The corruption then of our nature renders the law of God in this respect useless to us; for while it shows the way of life, it does not bring us back who are running headlong into death.

God having sent his own Son, etc. He now points out the way in which our heavenly Father has restored righteousness to us by his Son, even by condemning sin in the very flesh of Christ; who by cancelling as it were the handwriting, abolished sin, which held us bound before God; for the condemnation of sin made us free and brought us righteousness, for sin being blotted out we are absolved, so that God counts us as just. But he declares first that Christ was sent, in order to remind us that righteousness by no means dwells in us, for it is to be sought from him, and that men in vain confide in their own merits, who become not just but at the pleasure of another, or who borrow righteousness from that expiation which Christ accomplished in his own flesh. But he says, that he came in the likeness of the flesh of sin; for though the flesh of Christ was polluted by no stains, yet it seemed apparently to be sinful, inasmuch as it sustained the punishment due to our sins, and doubtless death exercised all its power over it as though it was subject to itself. And as it behoved our High-priest to learn by his own experience how to aid the weak, Christ underwent our infirmities, that he might be more inclined to sympathy, and in this respect also there appeared some resemblance of a sinful nature.

Even for sin, etc. I have already said that this is explained by some as the cause or the end for which God sent his own Son, that is, to give satisfaction for sin. Chrysostom and many after him understood it in a still harsher sense, even that sin was condemned for sin, and for this reason, because it assailed Christ unjustly and beyond what was right. I indeed allow that though he was just and innocent, he yet underwent punishment for sinners, and that the price of redemption was thus paid; but I cannot be brought to think that the word sin is put here in any other sense than that of an expiatory sacrifice, which is called אשם, ashem, in Hebrew,  242 and so the Greeks call a sacrifice to which a curse is annexed κάθαρμα, catharma. The same thing is declared by Paul in 2Co 5:21, when he says, that

“Christ, who knew no sin, was made sin for us, that we might become the righteousness of God in him.”

But the preposition περὶ peri, is to be taken here in a causative sense, as though he had said, “On account of that sacrifice, or through the burden of sin being laid on Christ, sin was cast down from its power, so that it does not hold us now subject to itself.” For using a metaphor, he says that it was condemned, like those who fail in their cause; for God no longer deals with those as guilty who have obtained absolution through the sacrifice of Christ. If we say that the kingdom of sin, in which it held us, was demolished, the meaning would be the same. And thus what was ours Christ took as his own, that he might transfer his own to us; for he took our curse, and has freely granted us his blessing.

Paul adds here, In the flesh, and for this end, — that by seeing sin conquered and abolished in our very nature, our confidence might be more certain: for it thus follows, that our nature is really become a partaker of his victory; and this is what he presently declares.