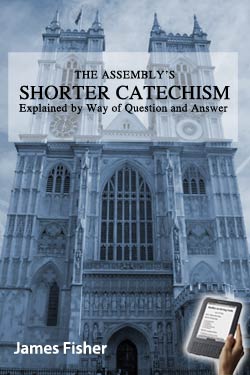 The Westminster Assembly's Shorter Catechism Explained by Way of Questions and Answer: This work on the Westminster Shorter Catechism was originally written together with Ebenezer Erskine of whom he was the son-in-law.  It's usually called Fisher's Catechism. It was begun by Ebenezer Erskine but it was continued and completed by Fisher. Unlike other commentaries on the WSC this one is done in a helpful question and answer format.

Nothing tends more to the advantage and well-being of the church than sound standards of doctrine, worship, and government, because, as they are a strong bulwark against contrary errors and opinions, so they tend to preserve truth in its purity, and the professors of it in unity and harmony among themselves. On the other hand, there is nothing more galling to the adversaries of truth than such public standards, because they are a very severe check and curb upon their unbounded and licentious liberty, being directly levelled against their erroneous schemes and plainly discovering the harmonious chain of scripture truth in opposition to them.

The divine warrant for such composures is abundantly clear from 2 Tim. 1:13, where we read of the "form of sound words," wherein Paul instructed Timothy; and Heb. 5:12, of "the first principles of the oracles of God;" and chap. 6:1, of "the principles of the doctrine of Christ." -- Besides, there are several summaries, or compendious systems of divine truth, recorded in scripture; such as Exod. 20:2-18; Matt. 6:9-14; 1 Tim. 3:16; and Tit. 2:11-15, with many others, which are the examples, or patterns, upon which the Christian churches, both in ancient and latter times, have deduced, from the pure fountain of the word, the principal articles of their holy religion, as a test and standard of orthodoxy amongst them.

The Shorter Catechism sets forth the principles of Christianity in the most excellent method and order. It would be tedious to give a particular analysis or division of the several heads of divinity, according to the order of the Catechism. But, in general, the method of it may be taken up under these four comprehensive articles, namely, the chief end, the only rule, the glorious object, and the great subject of the Christian religion.

I have employed my spare time for several months, in studying to make this Edition as correct and useful to the public as I could; and now I leave it in the hands of the God of Truth, that he may use it for the purposes of his own glory, in edifying the body of Christ, till they all come, in the unity of the faith, and of the knowledge of the Son of God, unto a perfect man, unto the measure of the stature of the fulness of Christ. (James Fisher)