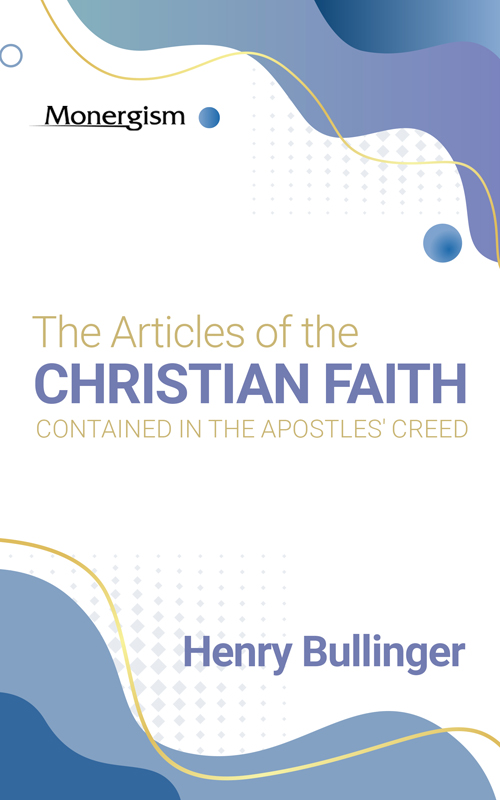 I think it is not beside the purpose now, and it is part of my duty, to lay before you those TWELVE ARTICLES of our belief. For they are the substance and matter of true faith, in which faith is exercised. Because it is the ground of things hoped for, it is plainly and briefly declared in these articles, what things are to be hoped for. But let no man at present look for the busy and full discourse of the articles of our faith from my hand. I will go through them only briefly, touching only the most necessary points. They are handled more at large in another place, by its several parts. Pray with me to the Lord, that he will grant to show to us his ways, to guide and preserve us in them, to the glory of his own name, and to the everlasting salvation of our souls.

First, I have to say something touching the common name by which the articles of our faith are usually called the Symbol or Creed of the Apostles. A symbol is the same as a conferring together, or a badge. The articles are called a conferring together because, by laying together the apostles' doctrine, they were made and written to be a rule and an abridgement of the faith preached by the apostles, and received by the catholic or universal church. But what he was, who first disposed and wrote these articles, is not known, nor is it left in writing by the holy scriptures. There are some who attribute it to the apostles themselves and therefore they call it by the name of the Apostles' Creed. St. Cyprian, the martyr, in his exposition of the Apostles' Creed, says,

"Our ancestors have a saying that, after the Lord's ascension, when by the coming of the Holy Ghost the fiery tongues sat upon every one of the apostles — so that they spoke both diverse and sundry languages, whereby there was no foreign nation nor barbarous tongue to which they did not seem sufficiently prepared to pass by the way — they had a commandment from the Lord to go to all nations to preach the word of God.

When they were therefore ready to depart, they laid down among themselves a platform of preaching for them all to follow, lest perhaps, being severed from one another, they preached different things to those who were converted to the faith of Christ. Therefore, being there all together, and replenished with the Holy Ghost, they gathered everyone's several statements in one, and made that breviary (as I said) to be a pattern by which to frame all their preachings, appointing it as a rule to be given to those who would believe."

This is what Cyprian says. But whether they were of the apostles' own making or not, or others made them (the apostles' disciples), it is yet very well known that the very doctrine of the apostles is purely contained and taught in them. These twelve articles are also called a badge, because by that sign, as if it were a badge, true Christians are discerned from false.

Now I will declare what order I will use in expounding them to you. This whole breviary, or abridgement of faith, may be divided into four parts; so that the three first parts make manifest the mysteries of the three Persons in one Godhead; and the fourth part lays out the fruits of faith, that is to say, what good things we look for by faith, and what good things God bestows on those who put their trust in Him.

And yet, notwithstanding, I will proceed orderly in this, so that the twelve articles are placed or set down.

Article 1 - I believe in God, the Father Almighty, maker of heaven and earth.

Article 2 - And in Jesus Christ, his only Son, our Lord.

Article 3 - Which was conceived by the Holy Ghost; born of the virgin Mary.

Article 4 - He suffered under Pontius Pilate, was crucified, dead, and buried: he descended into hell.

Article 5 - The third day he rose again from the dead.

Article 6 - He ascended into heaven, and sits at the right hand of God, the Father Almighty.

Article 7 - From there he shall come to judge the quick and the dead.

Article 8 - I believe in the Holy Ghost.

Article 9 - The holy catholic church, the communion of saints

Article 10 - The forgiveness of sins.

Article 11 - The resurrection of the flesh.