Are There Two Peoples of God or One? (eBook) 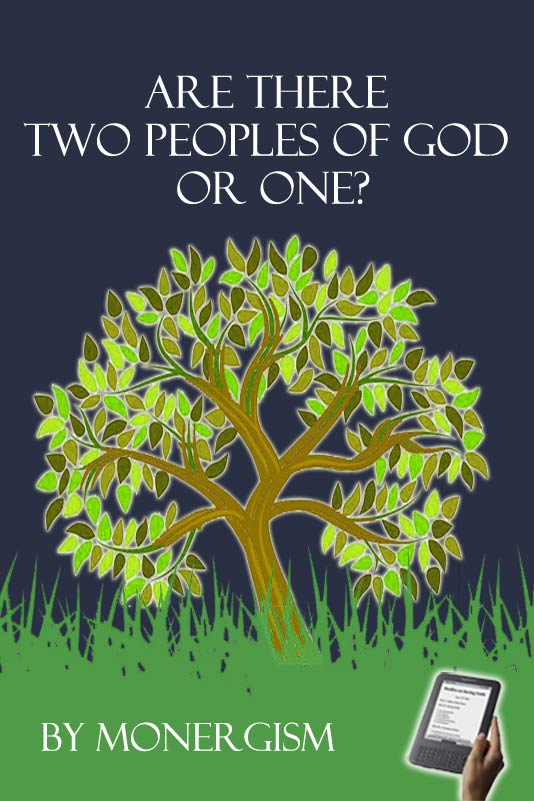 in ePub, mobi and HTML formats

Are there two peoples of God or one?

We believe the bible teaches there is one people of God with different roles in redemptive history - the Jews occupying preeminence since they are the first-born (Exodus 4:22) - the title (first-born) also given to Jesus (Col. 1:15-21; Rom 8:29; Heb 1:6; Rev 1:5). But the New Testament Church is simply a continuation and expansion of the people of God in the Old Testament (John 12;32), and though they are wild olive shoots they are grafted into the same tree whose roots are in Christ. The Apostle Paul declares that though Gentiles "WERE at one time ...alienated from the commonwealth of Israel and strangers to the covenants of promise [but in Christ they] are no longer strangers and aliens [to the covenants], but are fellow citizens [of the commonwealth] with the saints and members of the household of God, built on the foundation of the apostles and prophets, Christ Jesus himself being the cornerstone...fellow heirs, members of the same body, and partakers of the promise in Christ Jesus through the gospel." (Eph 2:12, 19; 3:6). (emphasis mine)

Likewise, the covenant of grace which God once made with Abraham to ethnic Israel was not abolished (but fulfilled in Christ), and there remains in that covenant a seed of blessing to ethic Israel (Rom. 11: 25-29). Though the Jews are now (due to a partial hardening) mostly alienated from the gospel, yet as Calvin says, "God is not unmindful of the covenant He made with their fathers" (fulfilled in Christ) which testifies that "He loves that nation" (Deut 29:4, 30:6) and in Romans 11: 27, 29 declares "that the grace of divine calling cannot be made void." After "the fullness of the Gentiles has come in" He will deliver on this promise by pouring out His Spirit upon ethnic Israel and restoring them en masse by joining many of them to Christ making them partakers of all His redemptive blessings.

One of the finest Reformed scholars of 20th century said,

"If we keep in mind the theme of this chapter [ Rom. 11] and the sustained emphasis on the restoration of Israel, there is no other alternative than to conclude that the proposition, 'all Israel shall be saved' is to be interpreted in terms of the fullness, the receiving, the in-grafting of Israel as a people, the restoration of Israel to gospel favour and blessing and the correlative turning of Israel from unbelief to faith and repentance. . . . In a word, it is the salvation of the mass of Israel that the apostle [Paul] affirms … While it is true that in respect of the privileges accruing from Christ's accomplishments there is now no longer Jew or Gentile and the Gentiles "are fellow-heirs, and fellow-members of the body, and fellow-partakers of the promise in Christ Jesus throughout the gospel" (Eph. 3:6), yet it does not follow that Israel no longer fulfills any particular design in the realization of God; worldwide saving purpose ... Israel are both “enemies” and “beloved” at the same time, enemies as regards the gospel, beloved as regards the election. . . “Beloved” thus means that God has not suspended or rescinded his relation to Israel as his chosen people in terms of the covenants made with their fathers. -- John Murray (1898-1975) in The Epistle to the Romans, Grand Rapids, Eerdmans, p. 99

In contrast to Dispensationalism, covenant theologians do not believe the Bible teaches a literal millennium where the temple will be rebuilt, nor will there be a re-establishment of the Law under the reign of the Davidic king over other nations. That language in apocalyptic literature is meant, rather, to be read Christocentrically, as symbols and types pointing to Christ (John 5:9, 33-47; Luke 24:27; Matt 5:17-18; 2 Cor 1:20; Heb 9:12; 7:23-24). We believe, rather, in the age to come when Jesus returns,  He will resurrect the dead,of both good and evil, there will be judgment and there a new heaven and a new earth prepared for his bride, which Jesus purchased by his blood and consists of both Jews and Gentiles. But note (and I quote) "There will be no temple in the city for its temple is the Lord God Almighty and the Lamb." (Rev 21:22.) In the coming age, Jesus will be our all in all, and He will reign forever.

The idea that law and sacrifice is re-established, clearly seems to not only go backwards in redemptive history but also reminds us of the warning the Father delivers on the mount of transfiguration where Jesus glorious appearance was like the sun. Jesus was talking to Moses and Elijah about his departure and what he would soon accomplish in Jerusalem (Luke 9:28-36) Suddenly the disciples wanted to make tents for these Old Testament prophets but the Father broken in to speak, diverting the gaze of the disciples from Moses (who represented the law) and Elijah (who represented the prophets) and said, "this is my Son, listen to him" why? because Jesus is the source of all Old Testament revelation - a revelation which he says bears witness about him (Luke 24:27; John 5:39) and who fulfilled every particular of it (Matt 5:17; 17:1-12; Luke 9:28:36). In Christ, God has not just spoken to us in portions or increments but in these last days has spoken to us by his Son (Heb 1:1-2) who is the radiance of God's glory...and "in him are hidden all treasures of wisdom and knowledge" (Col 2:3) so that all may honor the Son even as they honor the Father (John 5:23) The idea that the temple sacrifice will be reestablished the in millennium (aside from the strong warning in the Epistle of the Hebrews against this) is placing our eyes back on the shadows when they ought to be on Christ, who fulfilled every particular of the law, the prophets and the sacrifice. If eschatology takes our eyes off of Christ then there is, in my estimation, something dreadfully wrong with that eschatology.**

Does this mean we forget the Old testament? Not at all. Lord forbid. Rather, we read the Law and the prophets Christocentrically, not Israeleocentrically. Old Testament prophesy and types were mere shadows, signs pointing to the substance who is Christ. He brings out all truth out into the open like the noonday sun.

Consider that Hosea declared that God's anger against Israel would not last forever; that He would provide a renewed Israel who would serve the Lord faithfully (2:14–23). Matthew tells us that Jesus fulfills Hosea 11 (Matt. 2:13–15). That He is the true Israel, the faithful Israel who served the Lord completely and who succeeds where old covenant Israel failed. Where Israel fails to keep the Law, Jesus fulfilled it. Like ancient Israel, He came up out of Egypt, passed through the waters, and was tested in the wilderness  and chose twelve disciples (2:13–15; 3:13–4:11; see Ex. 12:40–42; 14:1–31; 16:4). Unlike old covenant Israel, however, Jesus did not sin and passed the test (Hebrews 5:7-9).

Are there one people of God or two?  Jesus is said to have laid down his life for His bride, the Church (Eph 5:25; Acts 20:28), which includes His people from all time. Jesus has only one bride. Any blessings that either ethnic Israel or the New Testament Church have, they have because of Christ. Israel has always been His bride, the Church, and the New Testament Church is said to be engrafted into the same body, the same covenant and the same commonwealth with Israel (Eph 2). All the promises of God in the Old Testament are yes and Amen in Him (2 Cor 1:20). All of the curses that God promised in the Old Testament for disobedience, Christ bore on the Cross. And all the obedience God commanded Israel, Jesus bore full burden Himself.

There will be great diversity of peoples on the new earth (without the division and sin) and our various callings we can only now imagine... but Israel's role as prophet, priest and king are fulfilled in Christ. Done. Christ is our King, our High Priest our Prophet. Shall we get our light and warmth from the planets that merely reflect the sun's light or from the sun itself? Shall we go to the prophets without the fullness of light that is in Christ to further illumine those prophets? The Old Testament greatly increases our faith because in light of what Christ has done, and there is an almost infinite number of things to read in those Scriptures which shine greater light on Christ and His ministry.

From my understanding of Dispensationalism, their view of the eternal state after the Millennium (where sacrifices have ceased) is what the world will actually look like when Jesus returns the first time.

Note: The work of Christ is the fulfillment and underlying essence of all previous covenants. So the promise made to Abraham is yes in Christ. We strongly oppose the idea of Replacement theology or supercessionism. We stand with the reformed theology of Westminster standards ( note Larger Catechism. Q. 191).We do not speak of the Church as 'New Israel'. Believing Jews we commonly refer to as 'remnant Israel'. Gentiles were unnaturally grafted in, and are children of Abraham by faith (Gal. 3:7). The 'Church' (invisible), is a spiritual body comprised of both Jews and Gentiles. The Church (visible) cannot be said to be spiritual or new Israel. Paul's sorrow, and Paul's hope expressed in Romans 9-11 reveals that God is not done with ethnic Israel. So, Westminster Divines, and many countless reformed and puritan theologians since 1600s longingly prayed for and were intentionally involved in Jewish missions. Here is a list of Noted Theologians in History Who Believed in a Future Conversion of National/Ethnic Israel.

* The majority of Covenant theologian scholars hold to this view of a mass conversion of Jews but there are exceptions.
** According to Ezekiel 43:18–27 & Ezekiel 43:18–46:24 (which dispensationalists point to) these animal sacrifices are not anywhere described as memorials but are for making atonement.

What Dispensationalists Say About the People of God

What the Bible Says About the People of God: Categorized Scripture List

The People of God

The Fulfillment of Prophecy

The Faith of Old Testament believers

The Kingdom of God