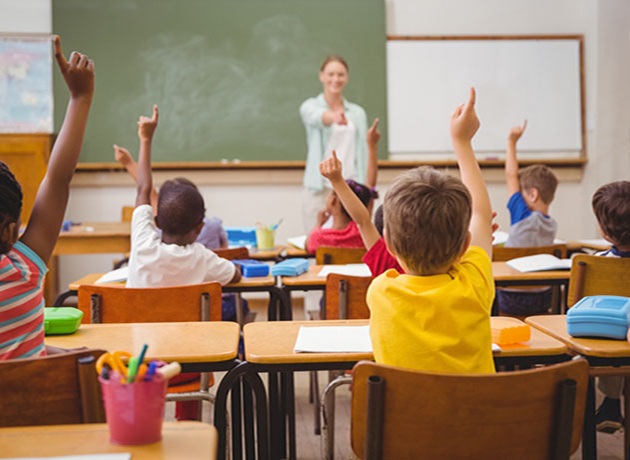 Did you ever notice that the persons who love to claim that Christians are out to quash everyone's freedom; and want to oppress everyone, are the same persons who have so strenuously and forcefully fought to have a monopoly on what our children learn in public schools? i.e.. to push their views of sexuality and the origin of humanity as the only ones allowed to be taught, etc The irony should not be missed.

Why not allow open debate?, critiques of textbook views? and alternate views in our textbooks? Let the children ultimately decide which ideas sound most reasonable. If the secularist view of the world is right and true, what is there to be afraid of in debate and presenting alternate views? Secularists have become so defensive about the truth of their own views that, instead of debate, other views are either ridiculed or outlawed. It is the nature of human beings to think of themselves as unbiased, neutral bystanders, so totalitarian tendencies often sneak in without notice.. It is awfully convenient to declare that one's own view is "not religious" and thereby give yourself the right to monopolize the dialog in education.

A stock argument for abortion rights is that outlawing abortion violates a woman's bodily integrity. There are, however, problems with that argument:
i) By that logic, an abortion violates the bodily integrity of the baby. So the argument is self-refuting.
ii) Is bodily autonomy absolute? If a depressed teenager is about to commit suicide, and I'm in a position to stop it, should I intervene, or does that violate his (or her) freedom to do whatever he wants with his own body?
iii) Do I have a right to get high or get drunk, then get behind the wheel of a car? That's what I want to do with my body. Is it wrong for government to infringe on my bodily integrity in that situation?
iv) Historically, governments haven't hesitated to draft men to fight wars. What about the bodily autonomy of men? What if they don't want their bodies to be used in war? Tough luck!
Suppose you oppose conscription. But what if it's a war of national survival, like England was facing in WWII?
v) Traditionally, women were exempt from the draft. So the charge of sexism backfires. In this case, men were having to assume a burden that women were not. The risk of death or injury in battle. The risk of capture and torture by the enemy.
Related Essay
Justice Alito Just Sounded The Alarm On Religious Liberty by By Bre Payton
The truth about Planned Parenthood  by Ben Shapiro 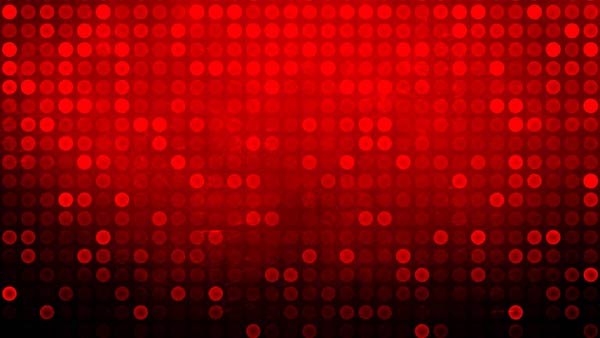 Subvert: to undermine the power and authority of (an established system or institution).

Today we are going to discuss the presuppositions of secular postmodern social progressives. If you are unsure what I am talking about, a presupposition is an implicit assumption every person holds about the world or a background belief relating to an utterance whose truth is taken for granted in discourse with others. It is something which people assume to be true even before they make a point. But in many, if not most, instances people's presuppositions about the nature of reality and how the world works are unprovable; they simply cannot be demonstrated to be true ... and in many cases because they are inconsistent or self-contradictory, can clearly be shown to be false. Why is that important?  Revealing someone's presuppositions also gives us a great opportunity to test the truth claims of those who hold them.

ok so ... what are some unproven and unprovable assumptions and presuppositions with which social liberals identify?: 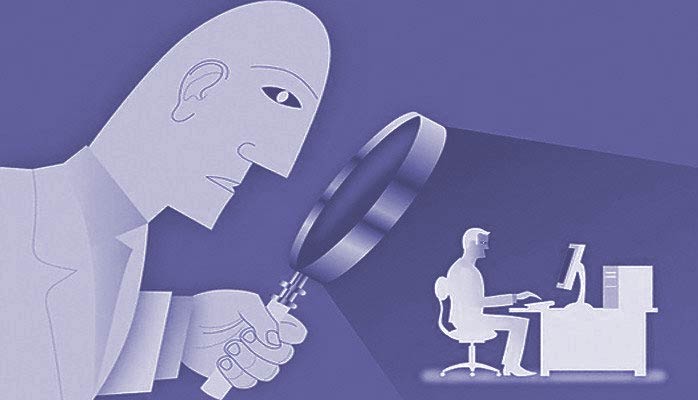 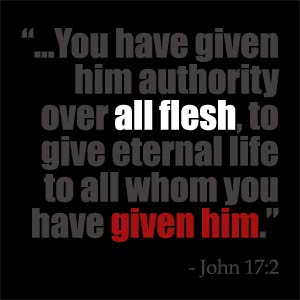 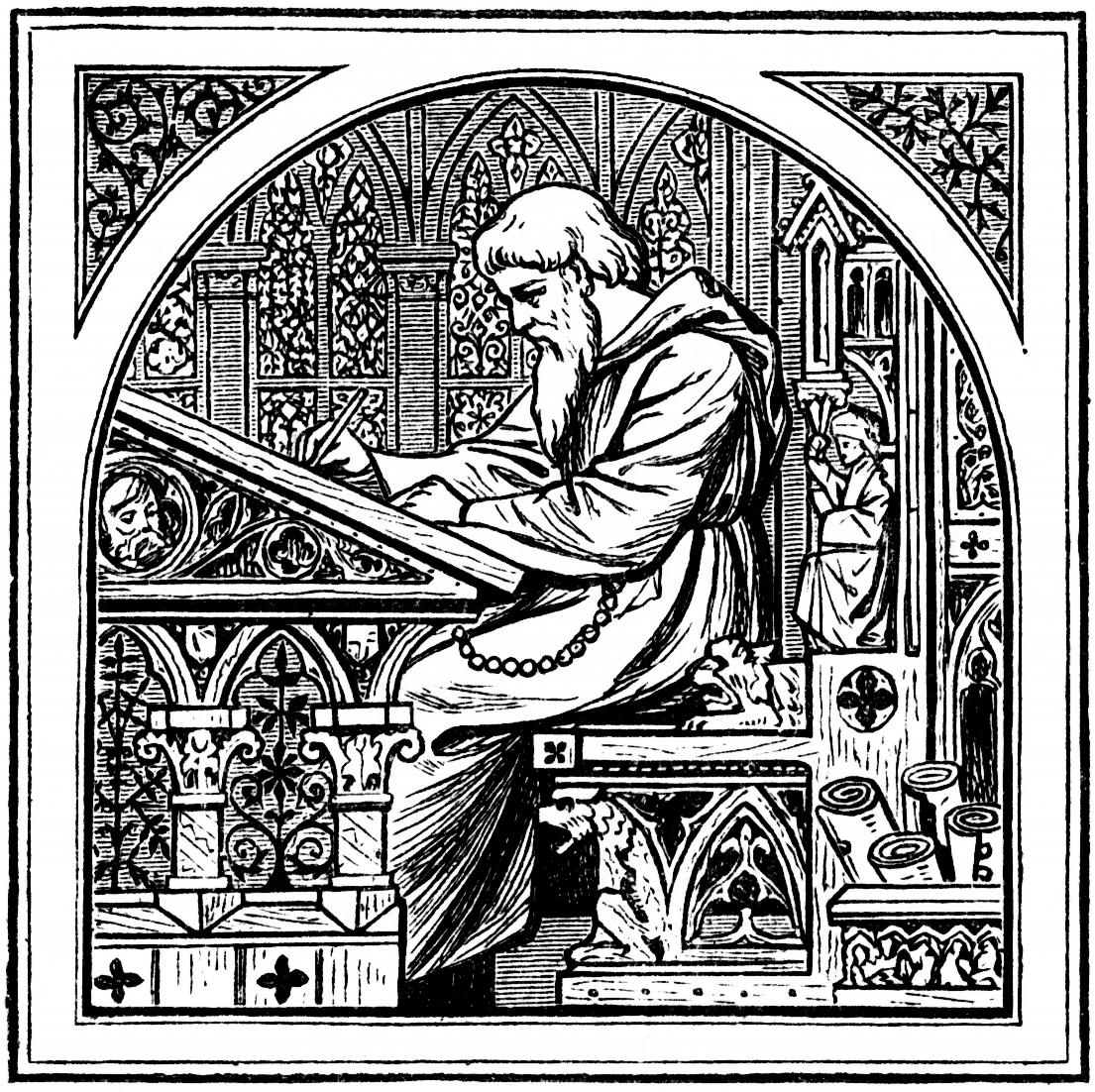 In a recent conversation, among other things, you made the claim that Christians are complicit in the tragic Orlando shootings by arguing that "you weren't the gunman, but you think gay people are sinful and need saving so you're part of the culture that built him."  While it is understandable why someone might make this statement during their pain in the face of such grief, but ... aren't we all sinful people desperately in need of saving?. Those in the LGBT community are not unique in this. I am no better. My sins, no doubt, easily equal or far exceed the sins of most of the souls who died in the nightclub. I certainly do not deserve God's favor or forgiveness and that could have just as easily been me die in there.  I cannot boast in anything - no merit, "no gifts, no power, no wisdom - I can only boast in Jesus Christ His death and resurrection."

The gospel is not "I am saved because I am better than you." The Bible has always taught "I am saved because while I have no righteousness of my own but Christ, the righteous one - He alone is my hope." Jesus came into this world to save sinners, like me ... He was a human being who was uniquely without sin and died the death I deserve, and it was MY sin that held him there on the cross. Jesus, now risen from the dead, declares freedom for the captives. 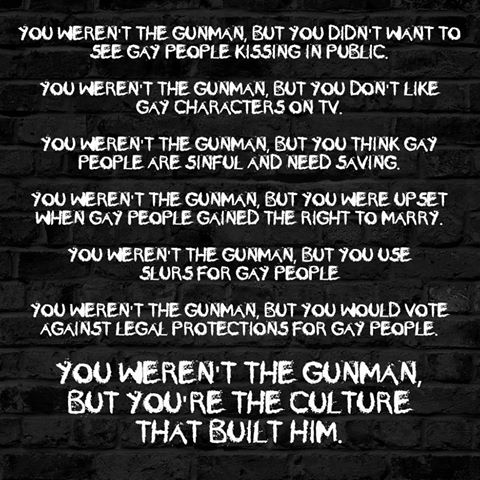 The image on the right was a recent meme posted on Facebook shortly after the horrible tragedy killing 50 people in Orlando, carried out by a lone Muslim gunman who had declared his allegiance to ISIS.  The ACLU and many progressive secularists were eager find a way to blame Christians for the massacre.

The rhetoric dished out by progressive secularists defining anyone who disagrees with them as a "bigot" has now been stepped up a notch. Not only are you a bigot if you disagree with them but now it somehow follows that if you disagree with their ideas you must want them to suffer a horrible death. Huh? Excuse me. That is an inexcusable leap of prejudicial logic. If anything this reveals the hearts of the persons making the declarations. The whole argument is based on the idea (false in my estimation) that if you disagree with LGBT politically then you must want them dead. So I am simply taking the same logic and turning it back on them. If that argument has any validity then it follows that you must want people dead if you oppose them politically. Since I disagree with making POLYGAMY legal (for example), your leap of logic is that somehow I want them dead. So if you likewise opposed polygamy then it would follow you wanted them dead, according to your own logic. This is a self defeating argument that cancels itself out.

Not only his this irrational thinking  but it is demonizing a whole group of persons of horrible intentions and is creating perhaps one of the widest wedges between people this land has ever seen  Isn't THAT the very definition of prejudice? Let's live in peace together with our diverse ideas, allowing liberty of conscience(1) and stick to changing people's minds through persuasion, not bullying or fear tactics. 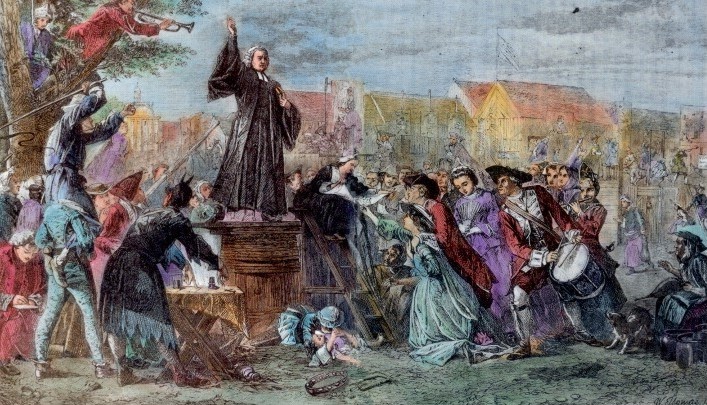 Have you considered that those who are unregenerate already know God, but they know Him as an enemy, not as a friend. Romans 1 declares although they "knew God" they "suppressed the truth in unrighteousness". So they are guilty for rejecting what they KNOW. When they hear us preach the gospel they reject it outright and will not believe because they "love darkness" and "hate the light" (John 3:19). Then the truth that they know and hate is changed altogether by God to a truth that they know and loves. Before that time, unless God opened their eyes and ears, they could neither see nor hear (Deut 29:4, 30:6) because they would not. It is a matter of their love and hate, not a matter of simply having no conception whatsoever of what is being said. They understand the concepts being communicated well enough, they just hate it. How could they be "hostile to God" (Rom 8:7) if they knew nothing about Him?

So if the unregenerate cannot understand God, what is the use of declaring the gospel? When we proclaim the law (and gospel) to unbelievers we do not preach it thinking they will want it, or believe it on their own. No Paul says the purpose of the law is not to show their ability, but to reveal sin.(Rom. 3:19) But we do so always with an eye to God that the things we say will be used by God to convict them as He changes their heart of stone to a heart of flesh, so they will flee to Christ as their only hope. People are not saved in a void but through the gospel. James says, “He chose to give us birth through the word of truth” (James 1:18).

Part of a comment by Patrick Korseck I think will be helpful here: 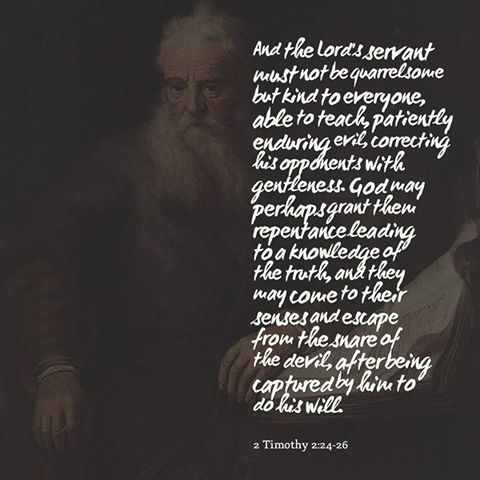 "And the Lord's servant must not be quarrelsome but kind to everyone, able to teach, patiently enduring evil, correcting his opponents with gentleness. God may perhaps grant them repentance leading to a knowledge of the truth, and they may come to their senses and escape from the snare of the devil, after being captured by him to do his will." -Tim 2:24-26

"And the Lord said to Paul one night in a vision, “Do not be afraid, but go on speaking and do not be silent,  for I am with you, and no one will attack you to harm you, for I have many in this city who are my people.” Act 18:9

"...brothers, pray for us, that the word of the Lord may speed ahead and be honored, as happened among you,  and that we may be delivered from wicked and evil men. For not all have faith." 2 Thess 3:1

Let these Texts soak in deeply and remind us who is sovereign over the whole of creation and over the hearts of men ...  For certain, it isn't me and it isn't you and it isn't those who hear the gospel. It is God and God alone. 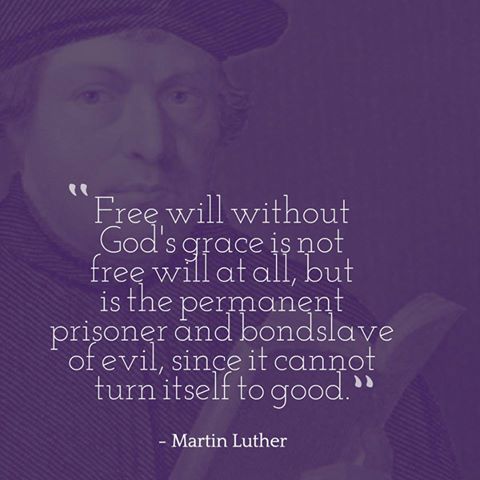 Recently, I received a comment from someone who suggested that we should still teach "free will" because it practically helps encourage people to behave ethically. This was the statement:

The belief that one can choose to do good freely... significantly impacts upon the idea that the Golden Rule is worthy of practice ... and will significantly help to lead one to behave accordingly.... and to encourage treatment of others with the dignity of self-determination. It is better to promote the idea of free will ... the belief is important. Hopefully, whatever one defines as "good" is in agreement.

How do we respond to this? The truth is, freedom entirely depends on which side of grace we are on. There is no biblical concept of free will before grace. Better to be as biblical as we can and explain freedom the way Jesus does: "whoever practices sin is a slave to sin ... [but] if the Son sets you free you will be free indeed." (John 8:34, 36)  To teach that the natural man has a free will, therefore, is to overthrow the gospel. That our will and affections were in bondage to sin (as natural men) is precisely why we needed the gospel in the first place. But now that we have been set free by Christ, we are free to obey and live according to the principles like the golden rule that the comment mentions.

When we give God's commands to an unbeliever, however, it is not because he is able to obey them. Paul rather says the purpose of divine commands is to reveal sin (Rom. 3:19) - and when men and women despair of themselves then they are in a perfect position to receive grace.