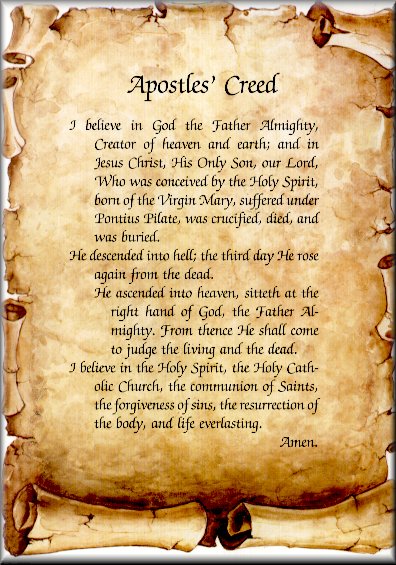 For hundreds of years Christians believed that the twelve apostles were the authors of the widely known creed that bears their name. According to an ancient theory, the twelve composed the creed with each apostle adding a clause to form the whole. Today practically all scholars understand this theory of apostolic composition to be legendary. Nevertheless, many continue to think of the creed as apostolic in nature because its basic teachings are agreeable to the theological formulations of the apostolic age.

The full form in which the creed now appears stems from about 700 AD. However, segments of it are found in Christian writings dating as early as the second century. The most important predecessor of the Apostles' Creed was the Old Roman Creed, which was probably developed during the second half of the second century.

The additions to the Apostles' Creed are clearly seen when its present form is compared to the Old Roman version:

I believe in God the Father Almighty. And in Jesus Christ his only Son our Lord, who was born of the Holy Spirit and the Virgin Mary; crucified under Pontius Pilate and buried; the third day he rose from the dead; he ascended into heaven, and sits at the right hand of the Father, from thence he shall come to judge the quick and the dead. And in the Holy Spirit; the holy Church; the forgiveness of sins; the resurrection of the flesh.

Still earlier fragments of creeds have been discovered which declare simply:

"I believe in God the Father Almighty, and in Jesus Christ his only Son, our Lord. And in the Holy Spirit, the holy Church, the resurrection of the flesh."

The Apostles' Creed functioned in many ways in the life of the church. For one thing, it was associated with entrance into the fellowship as a confession of faith for those to be baptized. In addition, catechetical instruction was often based on the major tenets of the creed. In time, a third use developed when the creed became a "rule of faith" to give continuity to Christian teachings from place to place and to clearly separate the true faith from heretical deviations. Indeed, it may well have been that the main factor involved in adding clauses to the Old Roman Creed to develop the Apostles' Creed was its usefulness in these varied ways in the life of the church. By the sixth or seventh century the creed had come to be accepted as a part of the official liturgy of the Western church. Likewise, it was used by devout individuals along with the Lord's Prayer as a part of their morning and evening devotions. The churches of the Reformation gladly gave their allegiance to the creed and added it to their doctrinal collections and used it in their worship.

The Trinitarian nature of the Apostles' Creed is immediately evident. Belief in "God the Father Almighty, Maker of heaven and earth" is affirmed first. But the heart of the creed is the confession concerning "Jesus Christ, his only Son, our Lord," with special attention given to the events surrounding his conception, birth, suffering, crucifixion, resurrection, ascension, exaltation, and coming judgment. The third section declares belief in the Holy Spirit. To this Trinitarian confession are added clauses related to the holy catholic church, communion of saints, forgiveness of sins, resurrection of the body, and life everlasting.

The polemical nature of the Apostles' Creed is likewise evident. Emphasizing the unity of God's fatherhood and sovereignty disputed Marcion's rejection of the same. The affirmation of the reality of Christ's humanity and historicity denied the contention of Marcionite and docetic heretics that he was not a fully human person who could be born, suffer, and die. His conception by the Holy Spirit and birth of the Virgin Mary as well as his exaltation after resurrection affirmed Jesus' deity over against those who denied it. Other clauses may well have been added to deal with particular crises faced by the church. For example, the confession regarding forgiveness of sins may have related to the problem of postbaptismal sins in the third century. Likewise, affirming the holy catholic church may have dealt with the Donatist schism.

The Apostles' Creed continues to be used today much as it was in the past: as a baptismal confession; as a teaching outline; as a guard and guide against heresy; as a summarization of the faith; as an affirmation in worship. It has maintained in modern times its distinction as the most widely accepted and used creed among Christians.