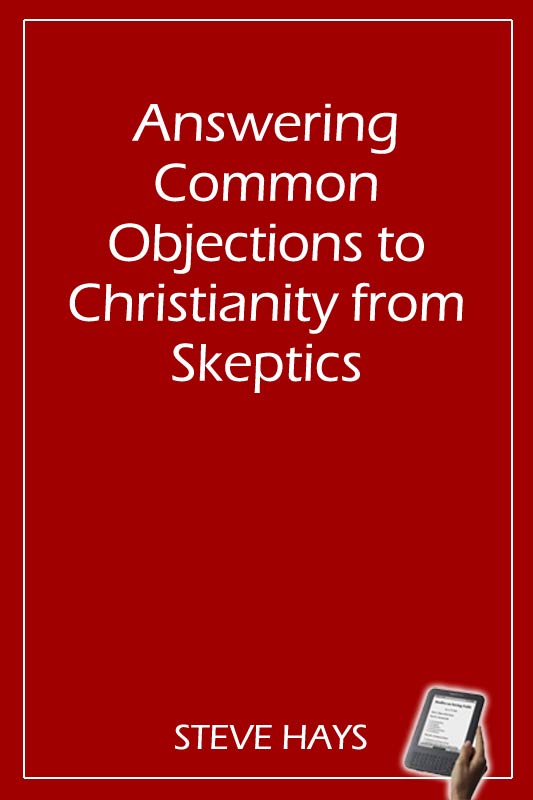 A generation ago, when people argued against the existence of God they would argue mostly asking for objective evidence for His existence.  These days, in the postmoden era, it seems like the main arguments against God have more to do with painting God as a moral monster, or the like.  The following are questions we frequently hear asked with an answer by apologist Steve Hays for each one.  Hope you find this useful.

1. Why Does the Bible Condone Genocide?

2. Does the Old Testament Endorse Slavery?

3. If God truly loves people why has he slaughtered so many of them throughout the history of the world?

4. No One Religion can Know the Fullness of Spiritual Truth, Therefore all Religions are Valid. It is Arrogant to Say Otherwise.

5. Christians Only Want Power Over Others - To Establish a Theocracy by Taking Over the State Mechanism

6. God is just a man made fairy tale. There is NO god period. There never was, and there never will be. If you take some time to do some critical thinking you will reach the same conclusion.

7. If God really cares about people and is all-powerful, why doesn't he create food for all the starving people in the world? Why doesn't he stop the earthquakes and tsunamis?

8. If God really cares for all people equally, how can he have a special "chosen" people?

9. If God created everything, why did he create AIDS, the ebola virus, etc.?

10. How can it be just to consign people to eternal torment in hell for sins committed in a relatively brief time on earth?

11. How can it be just to send people to hell when they have never had the opportunity to believe in Jesus?

12. If God truly wants people to believe in him, why does he not simply show himself to them like he did to Paul?

13. If the Christian faith is false or based on fabricated source documents, how would you be able to detect the error given your belief that the bible is the only admissible, authoritative evidence?

14. Why do Christians refuse to accept the scientific evidence for an old earth, evolution, etc., when they have no problem enjoying thousands of modern conveniences which are the result of this same science?

15. Why do Christians refuse to accept the historical and archaeological evidence that much of the bible was plagiarized from ancient near eastern sources?

16. If the bible has all the answers, why are there literally hundreds of Christian denominations that all think they alone are right and all the other Christians are wrong?

17. Why are Christians always the first to support the rights of greedy corporations, unrestricted gun ownership, invasion of foreign countries, the death penalty, etc., but the first to oppose helping the needy through welfare, foodstamps, and so on? Doesn't the bible teach mercy, the "Golden Rule," peace and non-violence?

18 .If God loves men and women both equally, why does the largest Christian Church (and many other denominations) refuse to allow any women, however gifted, to have any place of authority in the church?

19. If God loves all people, why does he condemn gays just because they were born with a different sexual orientation than heterosexuals?

20 . If Jesus died on the cross for the sins of the whole world, then how can God send people to hell to pay for their sins again? Was Jesus' payment not good enough for him?

21. How can you trust God's plan to bring you to a perfect heaven when he has a track record of failures? He created angels in a perfect place, but they rejected him and are now doomed to suffer forever; he put Adam and Eve in a perfect place and they lost it; he had to destroy the whole world in Noah's day; he had to confuse the languages at the Tower of Babel; he started the Church, and it ended up with Crusades, bigotry, division, etc. If he has failed to accomplish his plan of giving people a perfect place to live so many times, what makes you think he will actually get it right this time?

22. If Christians are really supposed to love others, how can they be happy for all eternity knowing that the majority of humans, and even some of their own friends and family, are in conscious, endless torment?

22. If Christianity is the only true religion, how come so many other religions are just as successful at making people good, ethical, and moral, and making them feel fulfilled and happy?

The Doctrine of the Incarnation
J. K. Mozley
An Aberration or Standard in Progressive Covenantalism? Issues about Covenant Conditions
R Scott Clark
Holiness Means More Than Killing Sin
Dr Sinclair B Ferguson
The Network of False Teachers - New Apostolic Reformation Connections
John Henry
The Saints and The Mark of The Beast
Voddie Baucham
From Predestination to Glorification: Defining Twelve Words Every Christian Should Know
David Schrock
Spiritual Swashbuckling – Dealing with Demons
Clint Archer
What Is Grace?
R C Sproul
Jonathan Leeman on Exhaustion with Division and Discourse in Today’s Evangelicalism
Jonathan Leeman
Living By the Book
H.B. Charles Jr.
Life is Worth It
Curated Resources
Refreshed In Chains
Chris Thomas
What the Genesis Text Really Says About Creation (5-Part Video Series)
Douglas F Kelly
The History of Baptism
Douglas F Kelly
And Yet It Was Not Consumed - Exodus 3:1-10
Douglas F Kelly
Prayer and the Holy Spirit
Douglas F Kelly
What is the Trinity?
Douglas F Kelly
If God Already Knows Why Pray
Douglas F Kelly
Creation and Change
Douglas F Kelly
What Does It Mean To Be “Confessional” (E.g., In The PCA)?
R Scott Clark
Dictionary of Deities and Demons in the Bible
Scripture References
The Well-Trained Theologian: Essential Patristic Texts for Retrieving Classical Christian Theology
Matthew Barrett
The Summation of the Gospel
B B Warfield
Handling Our Differences Redemptively, Not Destructively
Scotty Smith
Think About Such Things: Whatever Is Excellent
J. A. Medders
The Deep Places
Adam Parker
You Can Know God
William Boekestein
What Did the Cross Achieve? Seven Truths and Sixteen Quotes from John Murray
David Schrock
Who and what defines what heresy is?
Curated Resources
The Good, Chief, and Great Shepherd
Nicholas T Batzig
Liberty from Captivity
C H Spurgeon
Obstacles to Coming to Christ
A W Pink
Understanding Death: ‘Why does God allow bad things to happen?’
Curated Resources
A Definite Atonement: John Murray’s Case for a Disputed Doctrine
David Schrock
How does the second coming of Christ change how we live now?
Dr J Ligon Duncan III
Christ's Incarnation: The Foundation of Christianity (eBook)
C H Spurgeon
Against Rebellion
Ezekiel Hopkins
A Discourse on Perseverance in Prayer
Ezekiel Hopkins
Christ's Eternal Deity Proved
Thomas Brooks
John Calvin: A Lecture on the Occasion of his 400th Birthday
Herman Bavinck
Death
Herman Bavinck
How to Handle Divisive Persons in the Church
Chris Gordon
Another Reason Why The Covenant Of Works Matters
R Scott Clark
If Christ Is Not Savior, He Cannot Be Liberator: A Response to Ibram Kendi
Curated Resources
Does Mathematics = Western Imperialism?
Nancy Pearcey
The Counterfeit, Anti-Biblical Epistemologies of Postmodernism and Critical Theory
Dr Mark Coppenger
Sociology as Theology: The Deconstruction of Power in (Post)Evangelical Scholarship
Neil Shenvi
Body, Soul, and Gender Identity: Thinking Theologically About Human Constitution
Robert Smith
The Counsel of History
Michael Haykin
Do We Really Want Everything That Technology Can Give Us?
Gene Veith