The Acceptable Sacrifice or the Excellency of a Broken Heart (eBook) 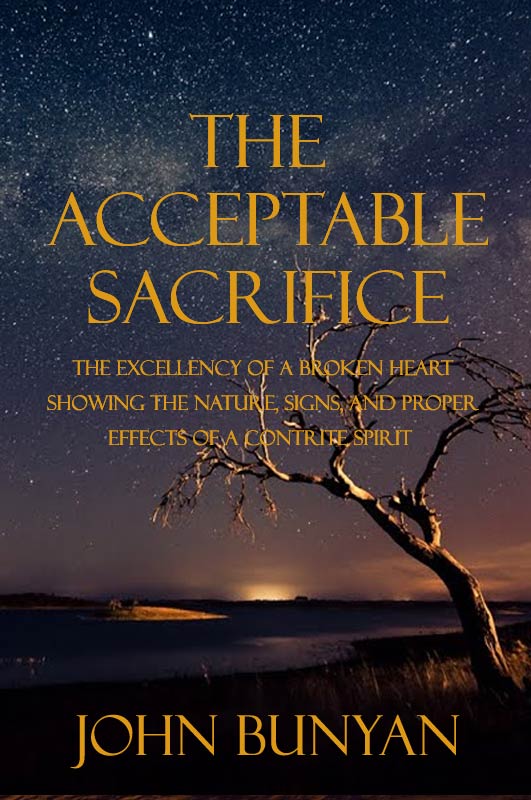 Responding to David's words in Psalm 51:17, "The sacrifices of God are a broken spirit: a broken and a contrite heart, O God, Thou wilt not despise," Bunyan addresses the proper condition of the human heart as an acceptable sacrifice, the broken heart.

John Bunyan of Elstow and Bedford, is important to the Reformed tradition, since his famous allegory is one of the chief avenues by which the Puritan spirit entered the mainstream of the English Reformation. With Calvinism as foundational, Bunyan’s prolific writings and fervent preaching embodied a vibrant awareness of Reformed theological thought and its implication for Christian living. The author of more than sixty books, he gained a unique place in history through Grace Abounding (1666), The Pilgrim’s Progress (pt. 1, 1678; pt. 2, 1684), The Life and Death of Mr. Badman (1680), and The Holy War (1682). Other works were primarily expository, doctrinal, and practical.

Bunyan joined the Bedford Baptist Church (1654) and soon began preaching in nearby villages. Prosecuted under an Elizabethan act against nonconformity, he was imprisoned for three months, which was extended to twelve years, with a brief respite during the sixth year.Bunyan emphasized the centrality of the Bible as the foundation for belief and conduct, stressing the grace of God as the basis of predestination, the focal point of eternal salvation. Initiative in the salvation of sinners belonged to God, since God elected, within God’s purpose and framework of grace, certain individuals to eternal life. Subscribing to the doctrine of “effectual calling,” Bunyan believed it was impossible to resist the call because of the power with which the Holy Spirit accompanied and illuminated the sinner’s understanding. None of the elect could fall from grace.

Though Bunyan was primarily an adherent of the Calvinist tradition, his view of God as Savior, providing salvation from divine wrath rather than God as sovereign ruler, and his belief in the necessity of justification through grace alone showed influence of Luther. The separatist tradition shaped his view of the sacraments. He strongly opposed teachings of the Quakers and the Arminians.

—taken from The Encyclopedia of Reformed Faith

A PREFACE TO THE READER

THE SACRIFICES OF GOD ARE A BROKEN SPIRIT

I. THE TEXT OPENED IN THE MANY WORKINGS OF THE HEART

II. THE DOCTRINE, ASSERTION, DEMONSTRATION, AND CONCLUSION, THAT A BROKEN AND TRULY CONTRITE HEART IS AN EXCELLENT HEART

III. WHAT A BROKEN HEART, AND WHAT A CONTRITE SPIRIT IS

IV. THE NECESSITY THERE IS THAT THE HEART MUST BE BROKEN

V. THE REASONS WHY A BROKEN HEART IS ESTEEMED BY GOD SUCH AN EXCELLENT THING

VI. ADVANTAGES THAT A CHRISTIAN GETS BY KEEPING HIS HEART TENDER

How to keep the heart tender