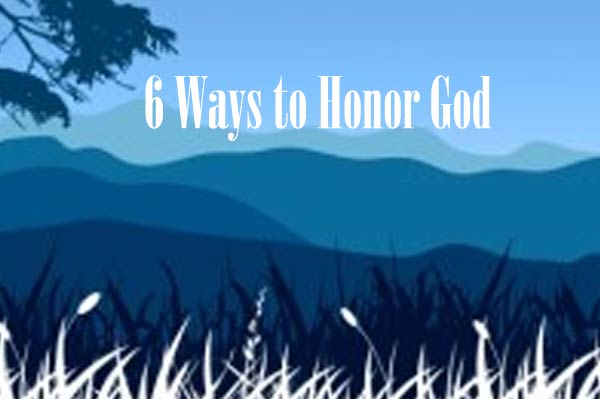 Those words were addressed unto Eli after he had failed lamentably in his duty both as a father and as the high priest of Israel. His sons were wild and wayward, and he "restrained them not" (1 Samuel 3:13) — no, not even when they "made themselves vile," and by their evil example, "made the LORD'S people to transgress" (1 Samuel 2:22-24). Interpretatively, Eli had "honored his sons above Jehovah" (1 Samuel 2:29); and therefore, a terrible judgment from heaven fell upon himself and his house.

Therein we behold a most striking contrast. When Israel committed idolatry at Shittim and one of them was caught in the act, the grandson of Aaron took a javelin and slew the man of Israel and his heathen paramour. In consequence, the Lord said, "Phinehas…has turned my wrath away." But more, "Behold, I give unto him my covenant of peace: And he shall have it, and his seed after him, even the covenant of an everlasting priesthood; because he was zealous for his God" (Num 25:10-13). Phinehas the priest had honored God — and God highly honored him and his family. Eli had dishonored Him — and he and his sons brought down condign judgment onto themselves (1 Samuel 2:31-36).

What has been pointed out above illustrates a fundamental principle in the governmental ways of God — namely, that He regulates His providences — according to our conduct. Those who give Him His proper place in their lives — are richly rewarded here, as well as hereafter. God's dealings with us in this life — are largely determined by the manner and measure in which we esteem and magnify Him.

What is signified by "honoring" the Lord is clearly exemplified by the case of Phinehas: he put the glory of God's name above all personal and sentimental considerations, being zealous in promoting and protecting His interests here on earth. Conversely, what is meant by not "honoring" the Lord, appears in the sad failure of Eli and his sons, who thought more of personal and family concerns — than of hallowing God. In what follows, we seek to show some of the most important things that are included in this expression, "those who honor me."

1) God Himself. This requires that we have right views of Him. Unless our thoughts about Him are shaped by what Scripture reveals concerning God's being, character, and perfections — we shall entertain the most erroneous and degrading ideas of Him. Such, alas, is the case with the great majority today even in Christendom: to them the Deity of Holy Writ is "the unknown God." The popular conception now prevailing is that God is fickle, sentimental, and weak — so that He has much cause to complain "you thought that I was altogether such an one as yourself!" (Psalm 50:21). His absolute sovereignty, His ineffable justice, His awe-inspiring majesty, His ineffable holiness — are unperceived by multitudes of professing Christians!!

God is to be honored, by ascribing to Him the glory of His matchless excellency (Exo 15:11; Psalm 104:1). He is to be honored by sanctifying Him in our hearts (Isa 8:13). By trusting, adoring, and obeying Him. He is to be honored in our public worship: "God is greatly to be feared in the assembly of the saints" (Psalm 89:7). "Sing forth the honor of his name: make his praise glorious" (Psalm 66:2).

2) His Son. Nothing is so dear unto God, as the honoring of Christ. No sooner was He laid in the manger than a multitude of the heavenly host was sent over Bethlehem's plains to proclaim, "Glory to God in the highest, and on earth peace, good will toward men" (Luke 2:14). When in Servant form, He was baptized in the Jordan, the heavens were opened, and the voice of the Father was heard saying, "This is my beloved Son, in whom I am well pleased" (Mat 3:17). When suffering unspeakable humiliation upon the cross, He moved the centurion to testify, "Truly this was the Son of God!" (Mat 27:54). After His mission on earth was completed, God highly exalted Him by seating Him at His own right hand. It is His express will, "that all men should honor the Son, even as they honor the Father" (John 5:23): all manner of worship which is due to the Father is due to the Son (Rev 5). We honor Christ by resting on His finished work, by taking His yoke upon us, by obeying His precepts, by following the example He has left us, by showing forth His praises.

3) His Word. God has "magnified his word above all his name" (Psalm 138:2), that is above every other medium through which His perfections are revealed. His wisdom and power are displayed in creation and providence — but His will and the way of salvation are made known in His Word. Our reverence for the Word indicates the measure in which we truly honor God. Our reverence for God's Word is manifested by . . .
receiving it without question or qualification as the inspired and infallible communication from God;
yielding unreservedly thereto, subordinating reason and all natural inclinations to its divine authority;
taking it as our sole Rule and Standard in all matters of faith and practice, so that the determining question is not how others believe and act — but by what the Scriptures say; meditating upon it day and night, making it the food of our souls;
our characters being formed and conduct regulated by its teachings — obeying its statues, heeding its warnings, drawing strength and comfort from its promises.

4) His Gospel. It is in the proclamation of the same, as a revelation of divine grace through Christ unto sinners, that the churches most honor God. The Law must indeed be preached, yet in subserviency to the Gospel. The sinner requires to hear what the Law charges him with, that he may learn his need of fleeing to Christ for discharge from its curse and condemnation. While "by the law is the knowledge of sin" (Rom 3:20), nevertheless, it is not by the preaching of the Law that sinners are delivered from its penalty. No, it is the Gospel of Christ which is "the power of God unto salvation to every one that believes" (Rom 1:16). Now the triune God is honored by the churches when the Gospel is preached in its unadulterated purity and its unfettered freeness; as it is slighted and insulted by the pulpit when displaced by any other substitute.

5) His Spirit. We must confine ourselves now to a single aspect. He is honored by the evangelist and by the church when He is looked unto and counted upon for His blessing on the preaching of the Gospel. It needs to be clearly recognized that neither the faithfulness nor the earnestness — still less the logic or the rhetoric — of the preacher will or can quicken a single soul. "Not by [human] might, nor by power — but by my spirit, says the LORD Almighty" (Zechariah 4:6). Alas that the churches, in their desire to "appeal to the young people," now have more faith in worldly methods and musical attractions; and in consequence, the Spirit is quenched. To our knees, in supplication to Him, is the great need and call of the hour.

6) His Cause. "Honor the Lord with your substance, and with the first fruits of all your increase" (Proverbs 3:9). Remember that He it is who "gives you power to get wealth" (Deuteronomy 8:18). And do you think that He does so — in order that we may gratify selfish lusts and indulge extravagant tastes? No, God's bounty unto us is to be used in works of piety and charity — and not wasted upon luxuries and vanities! Christ still sits near the offering box, beholding how we drop in our money! (Mark 12:41).

Our "substance" must not be limited unto money — but understood as including all the talents which God has given us: given, for the express purpose of honoring Him, and not for magnifying ourselves. All that we are and have — is to be dedicated to His glory.

"Those who honor me — I will honor" (1 Samuel 2:30). All history attests it. Those nations which have honored God, and circulated His Word, have been most blessed by Him. Those churches which have preached His Gospel and depended on His Spirit have been the fruitful and flourishing ones. Those individuals who have honored His Son and been regulated by the Scriptures have enjoyed most peace and joy in their souls.