Device Against the Learned and Wise 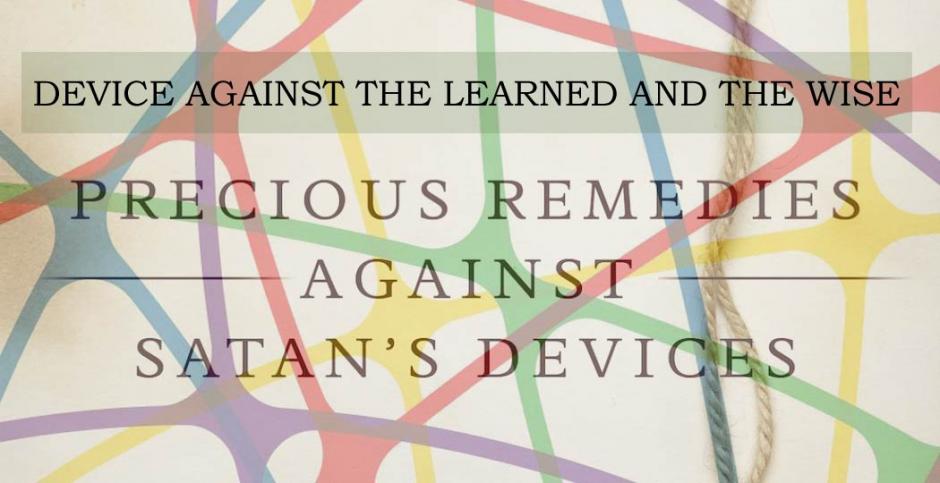 Remedy (1). The first remedy against this device of Satan is, seriously to consider, That you have nothing but what you have received, Christ being as well the fountain of common gifts as of saving grace. 'What have you,' says the apostle, 'that you have not received? And if you have received it, why do you boast as though you had not received it?' (1 Cor. 4:7). 'Whatever you are, you owe to him who made you; and whatever you have, you owe to him who redeemed you' (Bernard).

There are those who would hammer out their own happiness, like the spider climbing up by the thread of her own weaving. Of all the parts and abilities that are in you, you may well say as the young man did of the axe, 'Alas, master! it was but borrowed' (2 Kings 6:5). Alas, Lord! all I have is but borrowed from that fountain that fills all the vessels in heaven and on earth. My gifts are not so much mine as yours: 'Of your own have we offered unto you,' said that princely prophet (1 Chron. 29:14).

Remedy (2). The second remedy against this device of Satan is, solemnly to consider, That men's learning and trusting to their own wits, parts, and abilities, have been their utter overthrow and ruin; as you may see in Ahithophel, and those princes that engaged against Daniel, and in the scribes and Pharisees. God loves to confute men in their confidences. He who stands upon his parts and abilities, does but stand upon a quicksand that will certainly fail him. There is nothing in the world which provokes God more to withdraw from the soul than this; and how can the soul stand, when his strength is departed from him? Everything which a man leans upon—will be a dart that will certainly pierce his heart through and through! Ah! how many in these days have lost their estates, their friends, their lives, their souls, by leaning upon their admired parts and abilities! The saints are described by their leaning upon their beloved, the Lord Jesus (Cant. 8:5). He who leans only upon the bosom of Christ, lives the highest, choicest, safest, and sweetest life. Miseries always lie at that man's door that leans upon anything below the precious bosom of Christ; such a man is most in danger, and this is none of his least plagues, that he thinks himself secure. It is the greatest wisdom in the world to take the wise man's counsel: 'Trust in the Lord with all your heart, and lean not to your own understanding' (Prov. 3:5).

Remedy (3). The third remedy against this device of Satan is, to consider, That you do not transcend others more in parts and abilities, than they do you in grace and holiness. There may be, and often is, great parts and abilities, where there is but little grace, yes, no grace. And there may be, and often is, a great deal of grace, where there is but weak parts and abilities. You may be higher than others in gifts of knowledge, utterance, and learning, and those very souls may be higher than you in their communion with God, in their delighting in God, in their dependence upon God, in their affections to God, and in their humble, holy, and unblameable walking before God. Is it folly and madness in a man, to make light and slight of another, because he is not so rich in lead or iron as he, when he is a thousand thousand times richer in silver and gold, in jewels and in pearls, than he? And is it not madness and folly with a witness, in those who have greater parts and abilities than others, to slight them upon that account, when that those very people that they make light and slight of, have a thousand times more grace than they? And yet, ah! how does this evil spirit prevail in the world!

It was the sad complaint of Augustine in his time: 'The unlearned,' says he, 'rise up and take heaven by violence, and we with all our learning are thrust down to hell.' It is sad to see how many of the rabbis of these times do make an idol of their parts and abilities, and with what an eye of pride, scorn, and contempt do they look upon those who lack their parts, and who do not worship the idol that they have set up in their own hearts. Paul, who was the great doctor of the Gentiles, did wonderfully transcend in all parts and abilities the doctors and rabbis of our times, and yet, ah! how humbly, how tenderly, how sweetly, does he carry himself towards the lowest and the weakest! 'To the weak I became as weak, that I might win the weak: I am made all things to all men, that I might by all means save some' (1 Cor. 9:22). 'Who is weak, and I am not weak? Who is offended, and I burn not? Wherefore, if food causes my brother to stumble, I will eat no flesh while the world stands, lest I make my brother to offend' (1 Cor. 8:13).

But, ah how little of this sweet spirit is to be found in the doctors of our age, who look sourly and speak bitterly against those who do not see as they see, nor cannot speak as they speak. Sirs! the Spirit of the Lord, even in despised saints, will be too hard for you, and his appearance in them, in these latter days, will be so full of spiritual beauty and glory, as that they will darken that which you are too apt to count and call your glory. The Spirit of the Lord will not allow his choicest jewel grace to be always buried under the straw and stubble of parts and gifts (Is. 60:13-17).

Remedy (4). The fourth remedy against this device of Satan is, to consider, That there is no such way for men to have their gifts and parts blasted and withered, as to pride themselves in them, as to rest upon them, as to make light and slight of those who lack them, as to engage them against those people, ways, and things, that Jesus Christ has set his heart upon. Ah! how has God blasted and withered the parts and abilities of many among us, that have once been famous shining lights! How is their sun darkened, and their glory clouded! 'How is the sword of the Lord upon their arm, and upon their right eye! how is their arm clean dried up, and their right eye utterly darkened!' as the prophet speaks (Zech. 11:17). This is matter of humiliation and lamentation. Many precious discerning saints see this, and in secret mourn for it; and oh! that they were kindly sensible of God's withdrawing from them, that they may repent, keep humble, and carry it sweetly towards God's jewels, and lean only upon the Lord, and not upon their parts and understanding, that so the Lord may delight to visit them with his grace at such a rate as that their faces may shine more gloriously than ever, and that they may be more serviceable to the honor of Christ, and the faith of the saints, than formerly they have been.

Becanus says, that the tree of knowledge bears many leaves, and little fruit. Ah! that it were not so with many in these days.