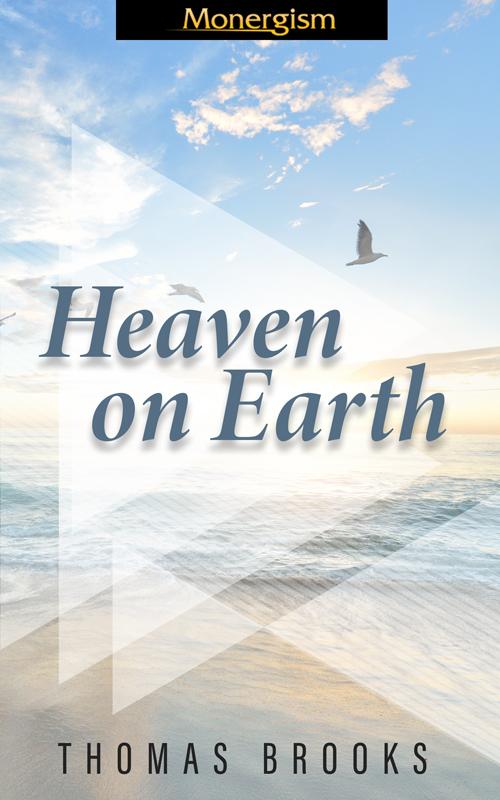 What are the top Puritan works that every Christian should read? Iain Murray answers "Beginners should start with Brooks, Thomas Watson, or John Flavel. ... Make sure to read ...Heaven on Earth by Thomas Brooks (on assurance)..."

A serious discourse concerning a well-grounded assurance of men's everlasting happiness and blessedness. Discovering the nature of assurance, the possibility of attaining it, the causes, springs, and degrees of it; with the resolution of several weighty questions.

"The greatest thing that we can desire—next to the glory of God—is our own salvation; and the sweetest thing we can desire, is the assurance of our salvation. In this life we cannot get higher, than to be assured of that which in the next life is to be enjoyed. All saints shall enjoy a heaven when they leave this earth; some saints enjoy a heaven while they are here on earth. That saints might enjoy two heavens, is the project of this book." Joseph Caryl.

To be in a state of true grace, is to be miserable no more; it is to be happy forever. A soul in this state is a soul near and dear to God. It is a soul much beloved, and very highly valued by God. It is a soul housed in God. It is a soul safe in God's everlasting arms. It is a soul fully and eminently interested in all the highest and noblest privileges. [Psalm 144:15; Mal 3:17; Rom 8:16-17; Deut 33:26-27; 1 Cor 3:22-23] The being in a state of grace makes a man's condition happy, safe, and sure. But the seeing, the knowing of himself to be in such a state, is that which renders his life sweet and comfortable. The being in a state of grace will yield a man a heaven hereafter, but the seeing of himself in this state will yield him both a heaven here and a heaven hereafter; it will render him doubly blessed, blessed in heaven, and blessed in his own conscience.

Now assurance is a reflex act of a gracious soul, whereby he clearly and evidently sees himself in a gracious, blessed, and happy state; it is a sensible feeling, and an experimental discerning of a man's being in a state of grace, and of his having a right to an eternal crown of glory; and this rises from the seeing in himself the special, peculiar, and distinguishing graces of Christ, in the light of the Spirit of Christ, or from the testimony and report of the Spirit of God, "the Spirit bearing witness with his spirit, that he is a son, and an heir-apparent to glory," Rom 8:16-17.

Now this assurance is the beauty and apex of a Christian's happiness in this life. It is usually attended with the strongest joy, with the sweetest comforts, and with the greatest peace. It is a pearl that most want, a crown that few wear. His state is safe and happy, whose soul is adorned with grace, though he sees it not, though he knows it not.

Every unsettled Christian is a terror to himself, yes, his life is a very hell; fears and doubts are his chief companions, and so he judges himself unfit and unworthy to live, and yet he is afraid to die; and truly this is the sad condition of most Christians.

A man may be God's, and yet not know it; his estate may be good, and yet he not see it, Eph 1:13; 1 John 5:13; Gal 4:6. It is one thing to be an heir, and another thing to know that one is an heir. The child in the womb or in the arms, may be an heir to a crown, and yet understands it not. But more of these things you will find in the following discourse—to which I refer you.

I. God denies assurance for a time to his dearest and choicest ones, and that upon many considerable grounds.

II. That the Scripture has many sweet significant WORDS to express that well-grounded assurance

III. Man may have true grace—who has no assurance of the love and favor of God

IV. That God may deny assurance long, and yet give it in to his children at last, after patient waiting.

V. That those choice souls who have assurance may lose it, they may forfeit it.

VI. That the certainty and infallibility of a Christian's assurance cannot be made known to any but his own heart.

VII. That there are some special seasons and times, wherein the Lord is graciously pleased to give to his children a sweet assurance of his favor and love
Two Cautions

Chapter 5 Showing the several ways and means of gaining a well-grounded assurance.

(1.) What knowledge that is, which accompanies salvation.

(2.) What faith that is, which accompanies salvation.

(3.) What repentance that is, which accompanies salvation.

(4.) What obedience that is, which accompanies salvation.

(5.) What love that is, which accompanies salvation.

(6.) What prayer that is, which accompanies salvation.

(7.) What perseverance that is, which accompanies salvation.

Chapter 7
Showing the difference between a true and a counterfeit assurance; between sound assurance and presumption.