Of the Worship of God Or Practical Religion (eBook) 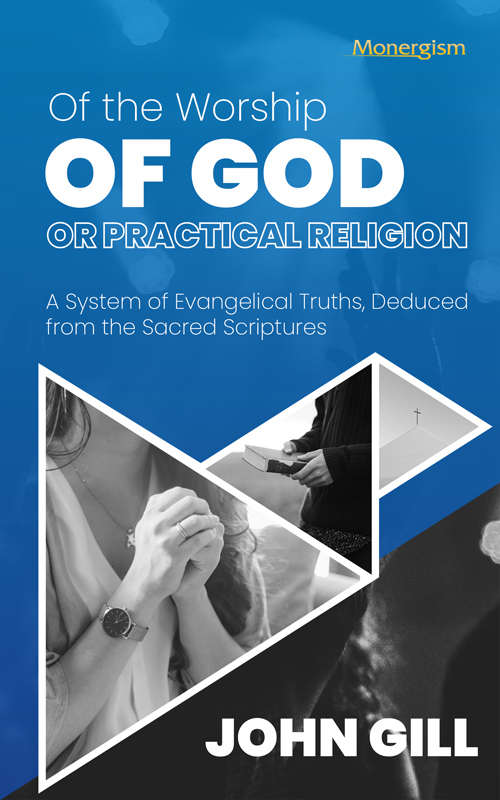 HAVING completed an exposition of the whole Bible, the books both of the Old and of the New Testament, I considered with myself what would be best next to engage in for the further instruction of the people under my care; and my thoughts led me to enter upon a scheme of Doctrinal and Practical Divinity, first the former and then the latter; the one being the foundation of the other, and both having a close connexion with each other. Doctrine has an influence upon practice, especially evangelical doctrine, spiritually understood, affectionately embraced, and powerfully and feelingly experienced; so true is what the apostle asserts, that the grace of God, that is, the doctrine of the grace of God, that bringeth salvation, the good news, the glad tidings of salvation by Christ, which is peculiar to gospel doctrine, hath appeared to all men, Gentiles as well as Jews, in the external ministry of the word; teaching us, to whom it comes with power and efficacy in the demonstration of the Spirit, that denying ungodliness and worldly lusts, we should live soberly, righteously, and godly in this present world. Where there is not the doctrine of faith, the obedience of faith cannot be expected. Where there is not the doctrine of the gospel, and men have not learned Christ, they live for the most part as if there was no God in the world, and give themselves up to work all sin with greediness. And on the other hand, doctrine without practice, or a mere theory and speculative knowledge of things, unless reduced to practice, is of no avail; such are only vainly puffed up in their fleshly minds, profess to know God in word, but in works deny him, have a form of godliness without the power of it, a name to live but are dead. Doctrine and practice should go together; and in order both to know and do the will of God, instruction in doctrine and practice is necessary; and the one being first taught will lead on to the other. This method of instruction the apostle Paul has pointed out to us in some of his epistles, especially in the Epistle to the Ephesians; in which he first treats of election, predestination, adoption, acceptance in Christ, redemption, and pardon of sin, regeneration and other doctrines of grace, and of the privileges of the saints under the gospel dispensation; and then enforces the several duties incumbent on them as men and Christians, respecting them in their several stations, in the church, in their families, and in the world. So the apostle instructed Timothy, first to teach the wholesome words of our Lord Jesus, the doctrine that is according to godliness and productive of it, and then to exhort and press men to the duties of religion from evangelical motives and principles. And he also enjoined Titus to affirm the doctrines of the gospel with constancy and certainty, to this end, that they which have believed in God might be careful to maintain good works.

OF THE OBJECT OF WORSHIP

OF THE KNOWLEDGE OF GOD

OF THE FEAR OF GOD

OF FAITH IN GOD AND CHRIST

OF TRUST AND CONFIDENCE IN GOD

OF PEACE OF MIND

OF THANKFULNESS TO GOD

OF RESIGNATION TO THE WILL OF GOD

OF WISDOM AND PRUDENCE

OF A GOOD CONSCIENCE

OF COMMUNION WITH GOD

OF THE NATURE OF A GOSPEL CHURCH

DUTIES OF THE MEMBERS OF A CHURCH TO EACH OTHER

DUTIES OF CHURCHES TO THEIR PASTORS

OF THE OFFICE OF DEACONS

OF THE DISCIPLINE OF CHURCHES

OF THE PUBLIC ORDINANCES

OF THE LORD'S SUPPER

OF THE PUBLIC MINISTRY

PUBLIC HEARING OF THE GOSPEL

OF THE LORD'S PRAYER

PLACE AND TIME OF PUBLIC WORSHIP

DUTIES OF HUSBAND AND WIFE

DUTIES OF PARENTS AND CHILDREN

DUTIES OF MASTERS AND SERVANTS

DUTIES OF MAGISTRATES AND SUBJECTS