The Work of Jesus Christ as an Advocate (eBook) 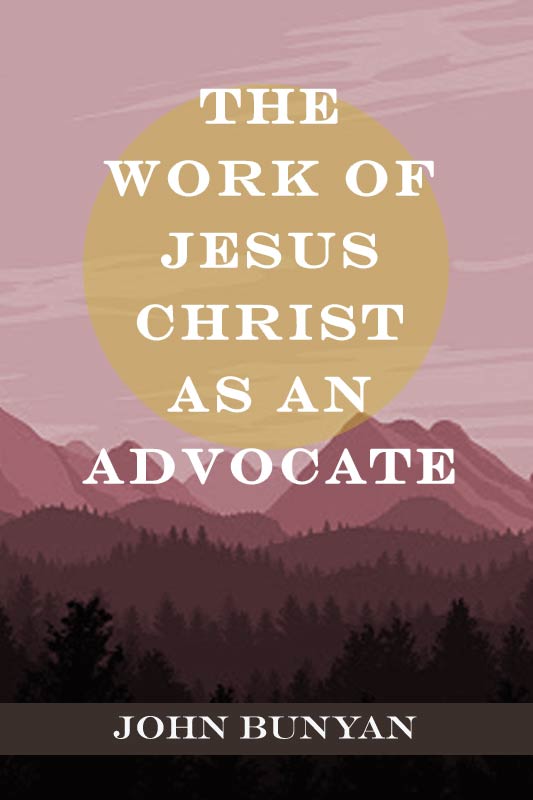 "AND IF ANY MAN SIN, WE HAVE AN ADVOCATE WITH THE FATHER, JESUS CHRIST THE RIGHTEOUS."—1 JOHN 2:1.

Of all the excellent offices which God the Father has conferred upon Jesus Christ our Lord, this of his being an Advocate with him for us is not the least, though, to the shame of saints it may be spoken, the blessed benefits thereof have not with that diligence and fervent desire been inquired after as they ought.

Christ, as sacrifice, priest, and king, with the glories in, and that flow from, him as such, has, God be thanked, in this our day, been much discovered by our seers, and as much rejoiced in by those who have believed their words; but as he is an Advocate with the Father, an Advocate for us, I fear the excellency of that doth still too much lie hid; though I am verily of opinion that the people of God in this age have as much need of the knowledge thereof, if not more need, than had their brethren that are gone before them.

These words, "if not more need," perhaps may seem to some to be somewhat out of joint; but let the godly wise consider the decays that are among us as to the power of godliness, and what abundance of foul miscarriages the generality of professors now stand guilty of, as also how diligent their great enemy is to accuse them at the bar of God for them, and I think they will conclude, that, in so saying, I indeed have said some truth. Wherefore, when I thought on this, and had somewhat considered also the transcendent excellency of the advocateship of this our Lord; and again, that but little of the glory thereof has by writing been, in our day, communicated to the church, I adventured to write what I have seen thereof, and do, by what doth follow, present it unto her for good.

I count not myself sufficient for this, or for any other truth as it is in Jesus; but yet, I say, I have told you somewhat of it, according to the proportion of faith. And I believe that some will thank God for what I here have said about it; but it will be chiefly those, whose right and title to the kingdom of heaven and glory, doth seem to themselves to be called in question by their enemy, at the bar of the Judge of all.

These, I say, will read, and be glad to hear, that they have an Advocate at court that will stand up to plead for them, and that will yet secure to them a right to the heavenly kingdom. Wherefore, it is more particularly for those that at present, or that hereafter, may be in this dreadful plight, that this my book is now made public; because it is, as I have showed, for such that Jesus Christ is Advocate with the Father.

Of the many and singular advantages, therefore, that such have by this their Advocate in his advocating for them, this book gives some account; as, where he pleads, how he pleads, what he pleads, when he pleads, with whom he pleads, for whom he pleads, and how the enemy is put to shame and silence before their God and all the holy angels.

Here is also showed to those herein concerned, how they indeed may know that Jesus is their Advocate; yea, and how their matters go before their God, the Judge; and particularly that they shall well come off at last, yea, though their cause, as it is theirs, is such, in justification of which, themselves do not dare to show their heads.

Nor have I left the dejected souls without directions how to entertain this Advocate to plead their cause; yea, I have also shown that he will be with ease prevailed with, to stand up to plead for such, as one would think, the very heavens would blush to hear them named by him. Their comfort also is, that he never lost a cause, nor a soul, for whom he undertook to be an Advocate with God.

But, reader, I will no longer detain thee from the perusal of the discourse. Read and think; read, and compare what thou readest with the Word of God. If thou findest any benefit by that thou readest, give the Father, and his Son the glory; and also pray for me. If thou findest me short in this, or to exceed in that, impute all such things to my weakness, of which I am always full. Farewell. I am thine to serve thee what I may,

The Work of Jesus Christ as an Advocate

How Christ Manages the Office of an Advocate

Who Have Christ For and Advocate

The Privileges of those Who Have Christ for an Advocate

The Necessity of Having Christ for an Advocate

The Use and Application