The Work of the Holy Spirit in Regeneration (eBook) 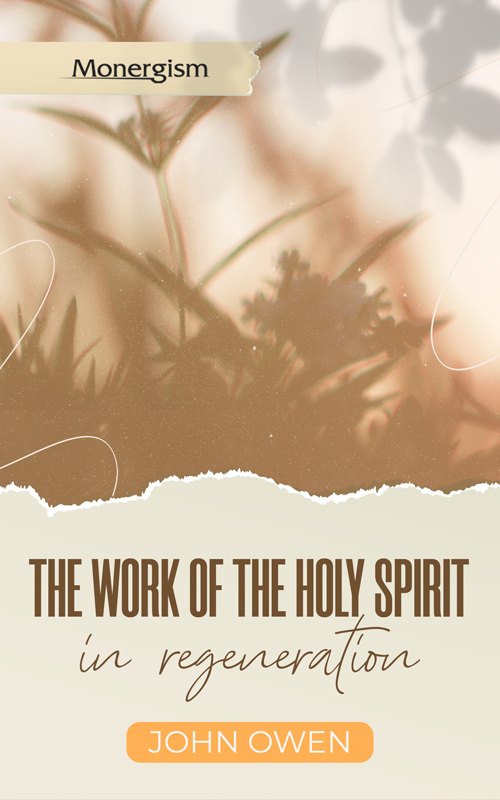 “To say that we are able by our own efforts to think good thoughts or give God spiritual obedience before we are spiritually regenerate is to overthrow the gospel and the faith of the universal church in all ages.”
- John Owen

All men can be divided into two groups. They are either regenerate or unregenerate. All men are born unregenerate (John 3:3-8).

These things are false because this gives all the glory of our regeneration and conversion to ourselves and not to the sovereign grace of God. It is false also because it leaves man to decide who will be in heaven and who will not. In spite of God’s purpose to save, and in spite of Christ’s incarnation and redemption, nobody could be saved and God would be frustrated and disappointed of his sovereign will and purpose.

If regeneration is nothing more than persuading a person to be good, then no new, real, supernatural strength has been conferred on the soul, though prejudices may have been removed from the mind. According to this teaching, man has no need to such supernatural power, because he has been able by his own power, the power of his own will, to overcome his depraved, sinful, corrupt nature, remove all errors and prejudices from his mind and bring himself to such holiness of life as to make himself wholly acceptable to God. This is the power of free will which some have believed and taught. Such people deny that man must first be born again before he can do anything pleasing and acceptable to God.

Some teach that grace enlightens the mind, and that all man has to do is to choose the good which God’s grace has shown him, and then that grace will work along with his choosing and willing and so bring the soul to new birth. But all the grace of God is doing here is enlightening the mind, exciting the desires and helping the will, and this only by persuading the person to repent and believe. No real strength is imparted to the soul. The will is left perfectly free to cooperate with this grace or not, as it chooses. This also denies the whole grace of Christ and to make it of no use at all in salvation. It ascribes to man’s free will the honor for his conversion. It makes a man give birth to himself which is nonsense. It destroys the analogy between the work of the Holy Spirit in forming the natural body of Christ in the womb and the work of the Holy Spirit in the forming of his mystical body in regeneration. It makes the act of living to God by faith and obedience to be a mere natural human act and not the result of Christ’s mediation. It allows the Spirit of God no more power in regenerating us than is in a minister who preaches the Word or an orator who eloquently and feelingly persuades a person to turn from evil to doing good.

In regeneration a person the Holy Spirit makes use of the law and the gospel. There is not only a moral but also a direct nature-changing work of the Spirit on the minds or souls of men in regeneration. This is what we must hold on to, or all the glory of God’s grace is lost, and the grace which comes to us by Christ will be neglected. Paul tells us of this direct work of the Spirit: “That you may know ... what s the exceeding greatness of his power towards us who believe, according to the work of his mighty power which he worked in Christ when he raised him from the dead’ (Eph 1:18:- 2). The power here mentioned has an exceeding greatness attributed to it, because by this power Christ was physically raised from the dead. Paul would have us know that the same mighty power which God worked in Christ when he raised him from the dead is the same mighty power which the Holy Spirit works when he raises us from spiritual death to spiritual life in regeneration. By this same mighty power we are kept by God to the day of salvation. It is because of his mighty power continually working in Christians that they are kept from ever falling away so as to be eternally lost.

There is an 'eye' in the understanding of man. This eye is the ability to see spiritual things. It is sometimes said to be blind, darkness, shut. By these descriptions we are taught that the natural mind cannot know God personally for salvation, and nor can it see, that is, discern spiritual things. It is the work of the Spirit of grace to open this eye (luke 4:18, Acts 26:18). He does this, firstly, by giving us the spirit of wisdom and revelation. Secondly, he gives us a heart to know him (Jer 24:7).

We are enabled to obey God firstly by an inward, spiritual, ruling principle of grace ... by virtue of the life and death of Jesus Christ according to the terms of the new covenant... by which God writes his laws in our hearts and enables us to obey them by the Holy Spirit.

CHAPTER I: WORK OF THE HOLY SPIRIT IN THE NEW CREATION BY REGENERATION

CHAPTER II: WORKS OF THE HOLY SPIRIT PREPARATORY UNTO REGENERATION

CHAPTER III: CORRUPTION OR DEPRAVATION OF THE MIND BY SIN

CHAPTER V: THE NATURE, CAUSES, AND MEANS OF REGENERATION

CHAPTER VI: THE MANNER OF CONVERSION EXPLAINED IN THE INSTANCE OF AUGUSTINE

Excerpt from The Works of John Owen Volume 3

Doctrine
Chad Van Dixhoorn
The Bible’s Conflict-Free Creation Story
Matthew Miller
Salvation and Receiving Mercy
Kevin Gardner
7 Reasons God's Sovereignty Gives those in Christ Contentment in the Face of Adversity
Monergism Answers
The illusion of digital community
Samuel James
Good Leaders Are Easy to Follow: How Shepherds Shape the Sheep
Steven Lee
Will God Provide for Your Needs?
Mr Garrett Kell
Lazy Christian is an Oxymoron
Costi Hinn
Lawful Love: How the Law Preserves and Propels Our Love
David Schrock
The Hostility of Loving Your Neighbor
Curated Resources
For The Kids Nobody Wants: Imagine There’s No Children
David Schrock
He Tailors Your Trials: How God Fits Your Afflictions Just For You
Curated Resources
Techno-Slavery: Being Ruled by Devices
Curated Resources
No Such Thing as “Little Sins.”
Kendall Lankford
10 Reasons to Host a Pastor Story Hour
Kendall Lankford
John Witherspoon and Slavery
Kevin DeYoung
Four Tips for Communicating the Gospel to Roman Catholics
Leonardo De Chirico
Where's Sola Scriptura In Scripture? - Luke 1:5-25
John Samson
Is Genesis Just One of the Many Creation Myths?
John Stonestreet
The Way to True Peace and Rest (eBook)
Robert Bruce
The Meaning Of Sola Scriptura - 2 Timothy 3:16-17 (MP3)
John Samson
How the Golden Chain Gives Us Missiological Confidence
Curated Resources
Put Not Your Trust in Princes -- An Exposition of Psalm 146
Kim Riddlebarger
Promises: God Hears Your Prayers
Zack Groff
The Regulative Principle and the Corporate Recitation of Creeds
Samuel G. Parkison
Seven Occasions for Fasting
Zack Groff
FBC Jax Speaks the Truth in Love about Sexuality
Denny Burk
Why We Reread the Bible
Ryan Higginbottom
Against Autonomy
T. M. Suffield
10 Practices to Kill Pride
Gavin Ortlund
Who Killed the Prayer Meeting?
Paul Miller
An Antidote to Spiritual Amnesia
Rev David P Murray
You’re a Pastor, Not a Therapist
Jeremy Pierre
What Christians Can Learn from Secular Humanism
John Stonestreet
A Nation of Biblical Illiterates
Thaddeus Williams
Calvin on the Authority of Scripture
Curated Resources
How Patient Is God With Us?
Nicholas T Batzig
The Classical Doctrine of God
James Dolezal, Dr Sinclair B Ferguson
What does the Bethel movement teach?
Costi Hinn
With Reverence and Awe (and Kids)
Curated Resources
We Live in Babylon, Not Israel
Marvin Olasky
What does it mean to present our bodies as a living sacrifice to God (Rom. 12:1)?
Dr Harry L Reeder III
What to do Before you Read the Bible
Curated Resources
The New Testament Explosion
Mitch Chase
The Megachurch Century
Shane Rosenthal
Keeping the Faith: Spurgeon and the Downgrade Controversy
Jason Allen
Jesus is God: Four Ways to See Jesus’s Divinity in John’s Gospel
David Schrock
Encore: Evangelicalism in 2020 and Beyond
Mark DeVine
The Heart of Faith (YouTube)
A Craig Troxel
When Were Christians First Regarded as Intolerant “Haters”?
Michael J Kruger