Excerpt from Let the Reader Understand, by Dan McCartney and Charles Clayton.

Is God's Will a Blueprint? 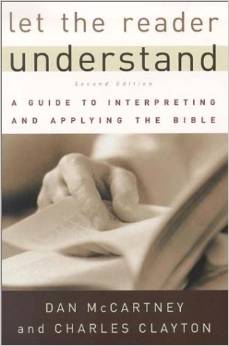 It is often assumed that God's will is some kind of blueprint for our lives which we must somehow try to discover, often just in time for a decision. A moment's thought should make us ask why we do not need to discern this blueprint for every decision in daily life. We seem to be able to decide on our breakfast cereal or the color of shirt we wear, yet we feel we must "find God's will" for more important matters such as college, marriage, career, or buying a house.

Some say that the difference is in the extent of the moral implications of a decision, so that certain issues are "moral" and others are merely pragmatic or "non-moral"; but it could be argued that every decision, no matter how trivial, has a moral dimension -- the simplest telephone call or the choice of butter rather than margarine--bears hidden moral consequence for stewardship of time or health, for example, and infringement of one small part of the law is tantamount to guilt for the whole law (James 2:10).

Yet most teaching on guidance treats major decisions as a special category, needing extra divine assistance, while minor decisions are neglected; for these, the individual is on his or her own. Where is the "guidance threshold"? The question implies the answer: It has something to do with accrued wisdom which we can apply safely in familiar areas, but not in less familiar areas.

The major decisions are usually then subjected to a routine process of "finding God's will." By this it is meant that God has already drawn up the blueprint and we must now try to discover it, and the speed of discovery will be related in some way to our spiritual maturity. It is a cat-and-mouse game of guidance in which we look for hidden clues to what God wants, trying to build up a composite picture and making a decision based on a judgment as to what He appears to be saying at a particular time. Typically the elements are the Bible, counsel, circumstances, and inner "peace", especially through prayer. The Bible is used something like a recorded weather forecast or, at worst, a horoscope.

God does indeed know the next step for each of our lives, but there is no mandate in Scripture by which we should seek to know it. On the contrary, we are explicitly commanded to avoid all kinds of divination.

Confusion has probably been caused by semantic coincidences. In our current translations, there are two NT Greek words which are commonly rendered "will" in English. One of them, boule (and its cognates), primarily signifies God's purposes; it is unchangeable and irresistible, and in this respect these future plans for our individual lives are unavailable to our inquiry. For example, the word occurs in, "Who resists his will?" (Rom. 9:19), and, "This man was handed over to you by God's set purpose and foreknowledge" (Acts 2:23).

There is indeed a blueprint for our lives, but it is God's prerogative alone and has no part to play in the subject of guidance, except to give us reassurance of God's sovereignty.

God's Will:  His Instructions for How We Should Conduct Our Lives

The other word which is usually translated "will" in English is the Greek word thelema and its cognates, occurring more than fifty times in the NT. It refers to something that is desired or that one wishes to happen. It is this "will" that we are commanded to know (Eph. 5:17), although in our sinfulness we often disregard it. We are commanded to "stand firm" in God's thelema (Col. 4:12). In every instance of its use in the Bible, it signifies God's wishes as to how we should conduct our lives. For example, "It is God's will that by doing good you should silence the ignorant talk of foolish men" (1 Peter 2:15).

It is no accident that a misuse of the word "will", wherein the idea of "seeking God's will" has come to mean finding out His blueprint for the next decision, is often accompanied by similar misuse of words in looking for clues to that guidance in the Bible. The horoscope mentality leads people to find double meanings in words and phrases, and doubtless many readers will be able to cite instances both humorous and tragic.

Various missionary enterprises seem to have been led by passages such as: "Enlarge the place of your tent, stretch your tent curtains wide, do not hold back; lengthen your cords, strengthen your stakes. For you will spread out to the right and to the left" (Isa. 54:2-3). And many an earnest Christian has searched the Scriptures daily looking for God's will about marriage.

One of the authors of this book observed the shock and confusion of a young woman who was approached by a man claiming that God had selected her to be his wife on the basis that guidance had been given through no less than a hundred texts. (To the relief of everyone except this man, she later married someone much more suitable.)

Often a promise in the Bible does have an obvious contemporary application because of a great fulfillment in Christ or a continuing meaning in the modern age. "Honor your father and your mother, so that you may live long in the land the Lord your God is giving you" (Ex. 20:12), for example, does have contemporary application (though not an exact one), as is apparent from its citation by Paul in Ephesians 6:4.

But the practice of claiming biblical promises without reference to their redemptive-historical context generally reveals a disregard for the hermeneutical principles that should obtain. God's will -- thelema -- has been made clear in the Scriptures; He has revealed His preference, His wishes, for the way we should conduct our lives.

It requires effort to understand and absorb God's wishes, but they are not obscure; the process of studying His Word reveals all His will (2 Tim. 2:15) and no "cat-and-mouse" game is necessary.

It is no surprise, therefore, that Paul commended the Ephesian elders "to God and to the word of his grace, which can build you up" (Acts 20:32), and that he commended the Scriptures to Timothy as all he needed for growth and ministry (2 Tim. 3:15-17). Finding God's will is a matter of understanding His Word.

It must be said there is often a temptation to avoid the effort involved. In the words of a popular proverb, there is no feast without a sacrifice. Understanding God's Word is a lifelong process, never complete of course, but the effort is richly repaid in the ability it brings to choose God's will. When we consider great and godly people in the church, those who have evidently lived out God's will with all its satisfaction and fruitfulness, we find invariably that they have been assiduous students of Scripture with a passion to understand it correctly.

Implicit in this pursuit of biblical understanding is the commitment to obey God's will. Study is not merely for the purpose of savoring doctrine in the abstract. The industrious searching for biblical truth, the daily meditation on the Word, and the striving for sound interpretation are useful only if driven by a desire to please the Lord, to submit to His wishes.