The Westminster Confession: A Commentary (eBook) 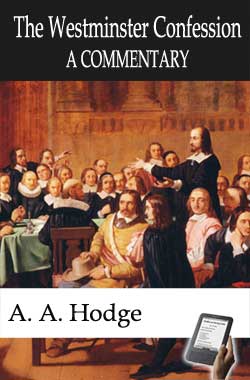 All that man is to believe concerning God, and the entire duty which God requires of man, are revealed in the Holy Scriptures, and are to be believed and obeyed because contained therein, because it is the word of God. This divine word, therefore, is the only standard of doctrine which has intrinsic authority binding the conscience of men. And all other standards are of value or authority only in proportion as they teach what the Scriptures teach.

While, however, the Scriptures are from God, the understanding of them belongs to the part of men. Men illumined by the Holy Spirit must interpret to the best of their ability each particular part of Scripture separately, and then combine all that the Scriptures teach upon every subject into a consistent whole, and then adjust their teachings upon different subjects in mutual consistency as parts of a harmonious system. Every student of the Bible must do this, and all make it obvious that they do it by the terms they use in their prayers and religious discourse, whether they admit or deny the propriety of human creeds and confessions. If they refuse the assistance afforded by the statements of doctrine slowly elaborated and defined by the Church, they must make out their own creed by their own unaided wisdom. The real question is not, as often pretended, between the word of God and the creed of man, but between the tried and proved faith of the collective body of God’s people, and the private judgment and the unassisted wisdom of the repudiator of creeds.

Creeds and Confessions, therefore, have been found necessary in all ages and branches of the Church, and, when not abused, have been useful for the following purposes: (1.) To mark, disseminate and preserve the attainments made in the knowledge of Christian truth by any branch of the Church in any crisis of its development. (2.) To discriminate the truth from the glosses of false teachers, and to present it in its integrity and due proportions. (3.) To act as the basis of ecclesiastical fellowship among those so nearly agreed as to be able to labor together in harmony. (4.) To be used as instruments in the great work of popular instruction.

It must be remembered, however, that the matter of these Creeds and Confessions binds the consciences of men only so far as it is purely scriptural, and because it is so; and as to the form in which that matter is stated, they bind those only who have voluntarily subscribed the Confession, and because of that subscription.

A Short History of the Creeds and Confessions
Some Account of the Origin of the Westminster Confession and Catechisms
Chapter 1: Of the Holy Scripture
Chapter 2: Of God and the Holy Trinity
Chapter 3: Of God's Eternal Decree
Chapter 4: Of Creation
Chapter 5: of Providence
Chapter 6: Of The Fall of Man, of Sin, and of the Punishment Thereof
Chapter 7: Of God's Covenant With Man
Chapter 8: Of Christ the Mediator
Chapter 9: Of Free Will
Chapter 10: Of Effectual Calling
Chapter 11: Of Justification
Chapter 12: Of Adoption
Chapter 13: Of Sanctification
Chapter 14: Of Saving Faith
Chapter 15: Of Repentance Unto Life
Chapter 16: Of Good Works
Chapter 17: Of Perseverance of the Saints
Chapter 18: Of Assurance of Grace and Salvation
Chapter 19: Of the Law of God
Chapter 20: Of Christian Liberty and Liberty of Conscience
Chapter 21: Of Religious Worship and the Sabbath Day
Chapter 22: Of Lawful Oaths and Vows
Chapter 23: Of the Civil Magistrate
Chapter 24: Of Marriage and Divorce
Chapter 25: Of the Church
Chapter 26: Of the Communion of the Saints
Chapter 27: of the Sacraments
Chapter 28: Of Baptism
Chapter 29: Of the Lord's Supper
Chapter 30: Of Church Censures
Chapter 31: Of Synods and Councils
Chapter 32: Of the State of Men after Death, and of the Resurrection of the Dead
Chapter 33: Of the Last Judgment

------
Appendix 1: The Meaning of 'System of Doctrine': Old School vs. New School
Appendix 2: The Auburn Declaration and The Declaratory Act
Appendix 3: What is Presbyterianism? by Charles Hodge
Appendix 4: What is Meant by Adopting the Westminster Confession?
Appendix 5: On the Passages of the Confession Concerning the Magistrate's Power as to Religion and the Church

From Predestination to Glorification: Defining Twelve Words Every Christian Should Know
David Schrock
Spiritual Swashbuckling – Dealing with Demons
Clint Archer
What Is Grace?
R C Sproul
Jonathan Leeman on Exhaustion with Division and Discourse in Today’s Evangelicalism
Jonathan Leeman
Living By the Book
H.B. Charles Jr.
Life is Worth It
Curated Resources
Refreshed In Chains
Chris Thomas
What the Genesis Text Really Says About Creation (5-Part Video Series)
Douglas F Kelly
The History of Baptism
Douglas F Kelly
And Yet It Was Not Consumed - Exodus 3:1-10
Douglas F Kelly
Prayer and the Holy Spirit
Douglas F Kelly
What is the Trinity?
Douglas F Kelly
If God Already Knows Why Pray
Douglas F Kelly
Creation and Change
Douglas F Kelly
What Does It Mean To Be “Confessional” (E.g., In The PCA)?
R Scott Clark
Dictionary of Deities and Demons in the Bible
Scripture References
The Well-Trained Theologian: Essential Patristic Texts for Retrieving Classical Christian Theology
Matthew Barrett
The Summation of the Gospel
B B Warfield
Handling Our Differences Redemptively, Not Destructively
Scotty Smith
Think About Such Things: Whatever Is Excellent
J. A. Medders
The Deep Places
Adam Parker
You Can Know God
William Boekestein
What Did the Cross Achieve? Seven Truths and Sixteen Quotes from John Murray
David Schrock
Who and what defines what heresy is?
Curated Resources
The Good, Chief, and Great Shepherd
Nicholas T Batzig
Liberty from Captivity
C H Spurgeon
Obstacles to Coming to Christ
A W Pink
Understanding Death: ‘Why does God allow bad things to happen?’
Curated Resources
A Definite Atonement: John Murray’s Case for a Disputed Doctrine
David Schrock
How does the second coming of Christ change how we live now?
Dr J Ligon Duncan III
Christ's Incarnation: The Foundation of Christianity (eBook)
C H Spurgeon
Against Rebellion
Ezekiel Hopkins
A Discourse on Perseverance in Prayer
Ezekiel Hopkins
Christ's Eternal Deity Proved
Thomas Brooks
John Calvin: A Lecture on the Occasion of his 400th Birthday
Herman Bavinck
Death
Herman Bavinck
How to Handle Divisive Persons in the Church
Chris Gordon
Another Reason Why The Covenant Of Works Matters
R Scott Clark
If Christ Is Not Savior, He Cannot Be Liberator: A Response to Ibram Kendi
Curated Resources
Does Mathematics = Western Imperialism?
Nancy Pearcey
The Counterfeit, Anti-Biblical Epistemologies of Postmodernism and Critical Theory
Dr Mark Coppenger
Sociology as Theology: The Deconstruction of Power in (Post)Evangelical Scholarship
Neil Shenvi
Body, Soul, and Gender Identity: Thinking Theologically About Human Constitution
Robert Smith
The Counsel of History
Michael Haykin
Do We Really Want Everything That Technology Can Give Us?
Gene Veith
"It Says", "God Says, "Scripture Says"
B B Warfield
Into the Metaverse
Samuel James
Is Violent Crime Under God’s Providence?
John Piper
The Blurred Lines of the Sexual Revolution
John Stonestreet
Why Do We Fear Death?
Guy Waters