A View of Some Divine Truths (eBook) 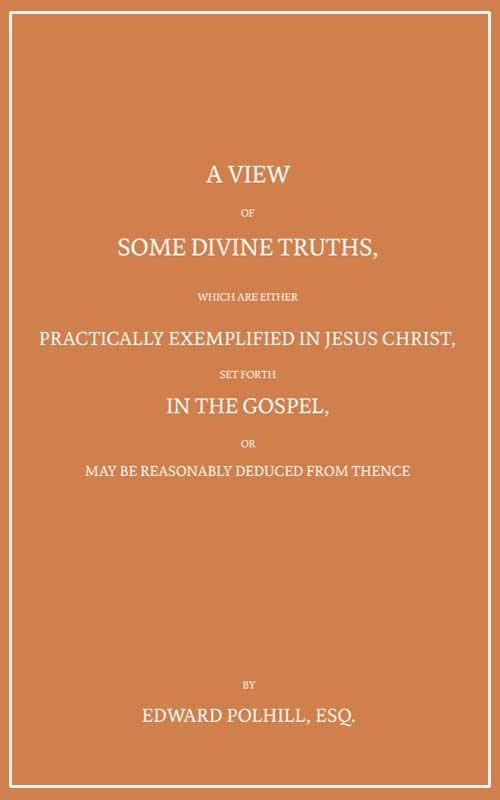 IT was anciently observed by St. Austin, touching the prophets under the Old Testament—Non tantum lingua illorum hominum, verum etiam vita fuit prophetica—they did not only prophesy, or reveal the mind of God by words, but by things done by or upon them. Isaiah must walk naked and barefoot, to show the shame of the Egyptian captivity. Jeremy must go down to the potter's house, and there see the vessel marred, to give the Jews a pregnant demonstration that God could unmake and destroy them. Ezekiel was to remove and bring forth his stuff, to give them a lively representation of their captivity. Above all, this was eminently seen in our great prophet Jesus Christ: he did not only reveal the gospel, but he himself is the substance and marrow of it. He is the very mirror of divine truths and perfections. His style is the image of the invisible God, the brightness of the Father's glory. As an eternal Son, he is such in himself; as incarnate, he is such to us. The Messiah (say the Rabbins) is facies Dei, the face of God. The glory of God (saith the apostle) is in the face of Jesus Christ. The divine perfections appear in him, as beauty doth in the face. The invisible one may here be seen; the inaccessible Majesty may be approached unto. Infinity, to accommodate itself to our model, appears nube carnis, in a cloud of flesh, that his glory might not swallow us up. In our Emmanuel we have a body of theology, an excellent summary of divine truths, in a very lively manner set forth to us. The atheist, who owns not a God in heaven, might here, if he had eyes of faith, see God in the flesh. The wisdom of God doth here appear, not in the orders and harmonies of nature; but in a plot much greater, and more admirable—God and man, infinite and finite, eternal and temporal, are met in conjunction, that the human, finite, temporal nature in Christ might be the theatre for the divine, infinite, eternal nature to show its perfections in. The truth of God manifests itself illustriously, in that no difficulty could hinder the early promise of the Messiah made immediately after the fall of man; neither could any time bury it in oblivion. He would be true in that which was the hardest thing for him to do, in parting with his only begotten out of his bosom for us. After many ages the promise must bud and blossom, and bring forth the Messiah. We see here, that God is the holy one, his hatred of sin is writ in red characters, in the blood and wounds of our dear Lord. His love to holiness was such, that he would send his own Son in the flesh, to recover holiness into the heart of man again. We have here providence accurately watching over our Saviour all along; first over his genealogy, then over his birth, life, death, resurrection: and lastly, over the issue of all—a church raised up to sing hosannahs to him for ever. Omnia plena sacramentorum, saith an ancient; every thing in Christ reads us a lecture of divinity. He being the second Adam, who brought in righteousness and life unto men; we are sure that there was a first, who brought in sin and death to them. From his conception, being an extraordinary one, we may plainly gather what the two states of nature and grace are. By the common generation we are flesh of flesh, unclean creatures. By the power of the regenerating Spirit overshadowing our hearts, we become spirit of spirit, holy new creatures. In his life and preaching we have miracles triumphing over nature and all the order of it; mysteries exceeding reason, and all its acumen; and a samplar of humility, meekness, mercy, righteousness, holiness, obedience, such as the sun never saw. In his death we have, what the proud Socinian thinks impossible, infinite mercy and infinite justice kissing and embracing each other. Mercy was seen, that God should give his only, his dearly beloved Son for us. Justice was seen, that God should exact of him, standing in our stead, as much as would counterpoise the sin and suffering of a world, in his glorious satisfaction. We see what that is which justifies sinners, and makes them stand before the holy God. In his excellent example, we see how justified ones, which are mystical parts and pieces of him, ought to walk and tread in his steps. These things are the subject matter of the ensuing discourse. May all, who are called christians, study Jesus Christ. The little λόγος, the reason of man, is much cried up in this age; may we much more adore the infinite word and wisdom of God. The temper of St. Bernard may be recommended to all: Si scribas, non sapit mihi, nisi legero ibi Jesum; si disputes aut conferas, non sapit mihi, nisi sonuerit ibi Jesus. The devout Father could not relish any thing but Jesus Christ; may our hearts ever burn and be inflamed with love to him, in whom are hid all the treasures of wisdom and knowledge; may we desire none but Christ: Non aliud præter illum, non aliud tanquam illum, non aliud post illum; nothing besides him, nothing like him, nothing after him. This is the scope of my book; if it profit or do good to any, it is enough, and as much as is desired by him, who is

A LOVER OF TRUTH, 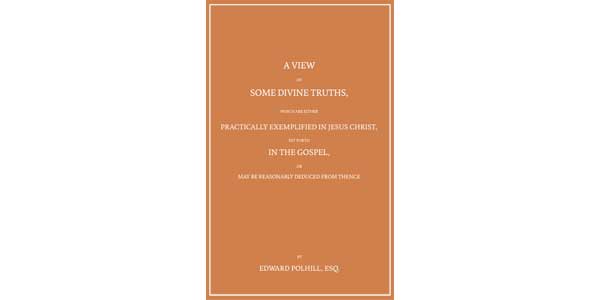 To The Christian Reader

CHAPTER I: A short view of God's all-sufficiency and condescension in revealing himself.

CHAPTER II: Christ considered as a prophet and a speculum. The divine attributes shine in him; particularly, wisdom.

CHAPTER III: Holiness the glory of the Deity: by it God acts like himself, and doth all for his own glory: it imports a hatred of sin, and love of holiness in man.

CHAPTER VI: The power of God manifest in Christ: in his incarnation and conception: in his miracles.

CHAPTER VII: The truth of God manifested in Christ. The promise of the Messiah.

CHAPTER IX: The doctrine of original sin; the great moment of it. Adam's sin imputed to us. The proof of it from scripture.

CHAPTER XI: Touching justification as to the law. Christ's righteousness constitutes us righteous. A double imputation; one to the proper agent, another to those in conjunction.

CHAPTER XII: Touching a holy life. It is not from principles of nature: it is the fruit of a renewed, regenerated heart: it issues out of faith and love.